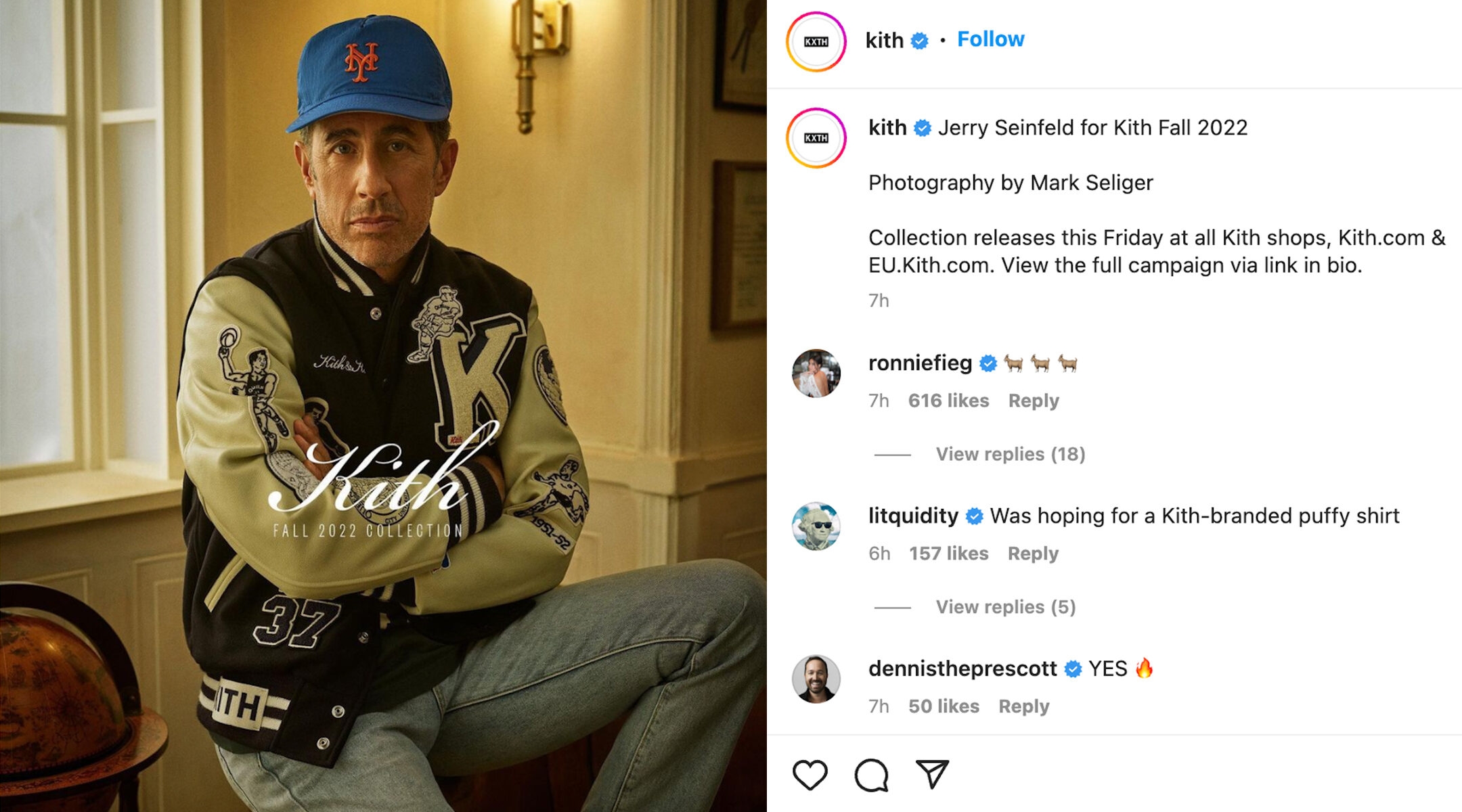 The comedian and New Yorker, whose last fashion statement may well have been the “puffy shirt” he wore on a 1993 episode of “Seinfeld,” appears in glamour shots taken by photographer Mark Seliger. In the images released Tuesday, he leans against bookshelves and stares forlornly out the window modeling brightly patterned jackets, the pricey sneakers that put Kith on the map, a New Era Mets hat and a gray Queens College sweatsuit.

Seinfeld, who graduated from Queens College in 1976, models the CUNY Collection — a capsule collection made in collaboration with Russell Athletics that incorporates clothing inspired by Queens College and Brooklyn College gear.

“Our goal for this partnership was to build school pride for students and alumni, while supporting the colleges’ aims to foster future students’ growth,” Kith’s website states. The Kinnect Foundation, Kith’s non-profit arm, is making $25,000 grants that will go towards Queens and Brooklyn college to “further their education initiatives.”

“Life changing moment for myself and the brand tomorrow. Fall 22 campaign coming,” tweeted Kith founder and designer Ronnie Fieg, who is Israeli-American and grew up in Jamaica, Queens, the day before the Seinfeld photos were released.

Fieg’s passion for footwear began while he worked at the New York footwear chain David Z, owned by his cousin David Zaken. According to the New York Times, Fieg asked for a job at the store in lieu of a bar mitzvah present from Zaken.

In 2021, Fieg and Kith designed a limited edition Hanukkah line that featured sweatshirts, t-shirts, wrapping paper and even a dreidel.

“There are a handful of people that I’ve dreamed of working with from a young age. On the very top of that list was Jerry,” Fieg wrote in an Instagram post on Tuesday. “There are very few individuals that have had the kind of impact Jerry had on me.”

“Having candid conversations on set with one of my heroes made me realize how incredible work can be when you infuse your biggest inspirations in what you do.”

Seinfeld has had fun at the expense of the fashion industry in the past. “I hate clothes, okay?” his character says in a 1991 “Seinfeld” episode. “I hate buying them. I hate picking them out of my closet. I can’t stand every day trying to come up with little outfits for myself.”