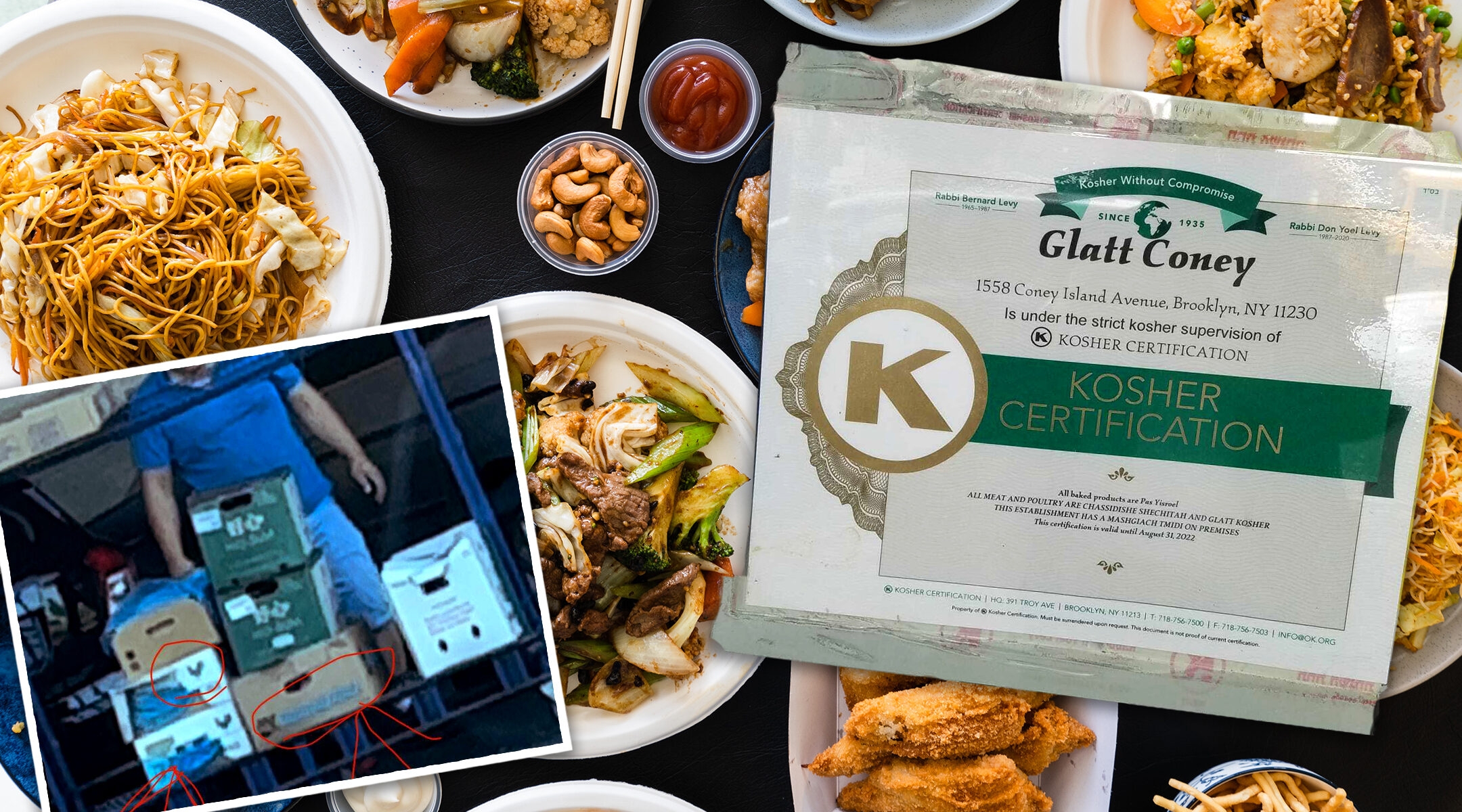 (New York Jewish Week) — Kosher Chinese restaurants in New York City moved quickly to distance themselves from a restaurant in New Jersey that lost the stamp of approval from one of the largest kosher certification companies in the United States.

This week, Brooklyn restaurants Glatt Kosher Family in Kensington and Glatt Coney in Flatbush/Midwood put up signs on their windows saying that they are not associated with the Manalapan, New Jersey eatery.

“We have never owned nor operated a restaurant in Manalipan [sic] N.J.,” one sign said. 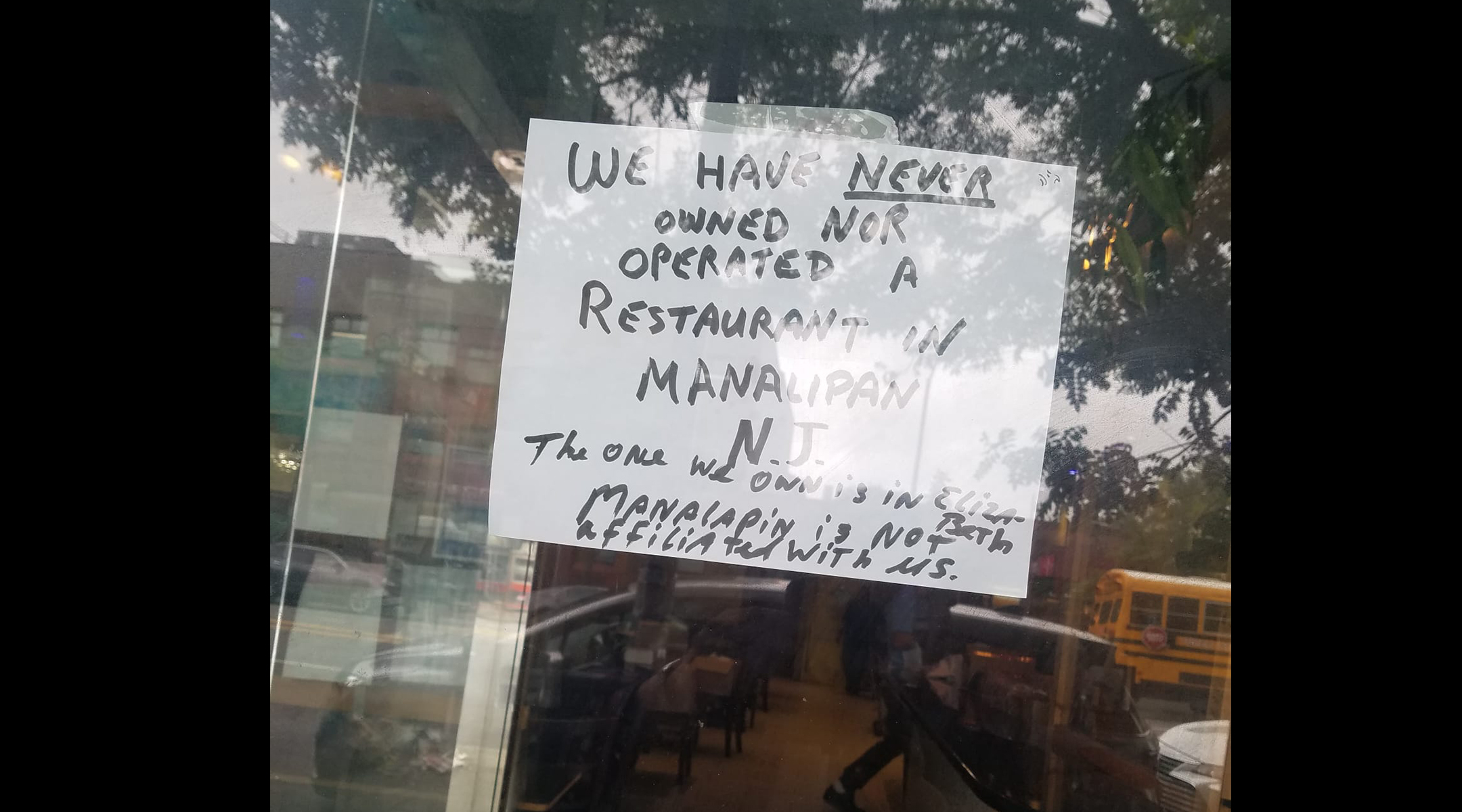 Earlier this week, Kosher Chinese Express in Manalapan had its kosher certification pulled by the Brooklyn-based OK Kosher Certification agency and subsequently closed. The owner of the New Jersey restaurant had been filmed loading cases of what appeared to be non-kosher chicken and meat into his vehicle.

Although it is unclear what, if any, connections there are between the restaurants in New York and New Jersey, the scandal was enough to generate a frenzy of comments on blogs and Facebook groups catering to those who keep kosher.

Some commenters passed on rumors that the Brooklyn restaurants, which are also certified under the OK Kosher brand, were somehow connected to the New Jersey store.

Indeed, Rabbi Yudel Shain, a resident of Lakewood, New Jersey who runs an organization called Kosher Consumer, alleged that the owner of the Manalapan store is related to a man who goes by the name of Tony who, according to Shain, owns the two restaurants in Brooklyn. Shain, who obtained the photographs implicating the Manalapan restaurant, told the New York Jewish Week that he was the supervising rabbi at the New Jersey restaurant 18 years ago.

When the New York Jewish Week called Glatt Kosher Family, a man identifying himself as Tony answered, but said that he was only the manager. He would not give the owner’s name. He confirmed that 20 years ago, he owned the Manalapan restaurant in Jersey.

“The guy who owns the restaurant now is a different guy,” Tony said. “You can’t just say, ‘he’s Chinese, you must be related to him.’ I’m not related to him. I sold the store to him.”

Tony added that there is nothing to worry about in the Brooklyn stores because the owner does not have a key, adding that “the mashgiach is here all the time.” (In many kosher restaurants, a mashgiach, or kosher supervisor, is assigned full-time to supervise the kashrut status. Many kosher agencies demand that only the kosher supervisor be given a key to a restaurant in order to ensure that the kosher rules are being followed.)

“They are tough here,” Tony said.“The mashgiach over in Manalapan must have been sleeping.”

Asked for comment, someone answering the phones at OK Kosher hung up on the New York Jewish Week. The company put out a statement on Monday saying that they went through an “intense and careful investigation” of the Manalapan Chinese restaurant.

When this reporter attempted to call the Manalapan restaurant the phone lines were off. Others in the community confirmed that the store is closed.

In a statement released on Thursday, OK Kosher revealed findings of its investigations saying that Kosher Chinese Express “intentionally violated its obligation to the kosher consumer.”

The statement said that empty boxes from non-kosher chicken and meat were discovered by OK Kosher rabbis in a communal dumpster where the restaurant is located.

“The owner was questioned by OK Kosher Rabbis about the boxes in the dumpster,” the statement said. “Later, we obtained verbal admission from the owner that he brought in non-kosher chicken and meat in small amounts over an extended period of time.”

The photos and video of the non-kosher meat were widely shared on Sept. 5 via a Facebook group called Great Kosher Restaurant Foodies, run Elan Kornblum, who also publishes a popular blog under the same name. The post now has hundreds of comments, and led to dozens of Orthodox media articles and blog posts about the subject, sending the community into a frenzy to warn people about potentially eating non-kosher meat. 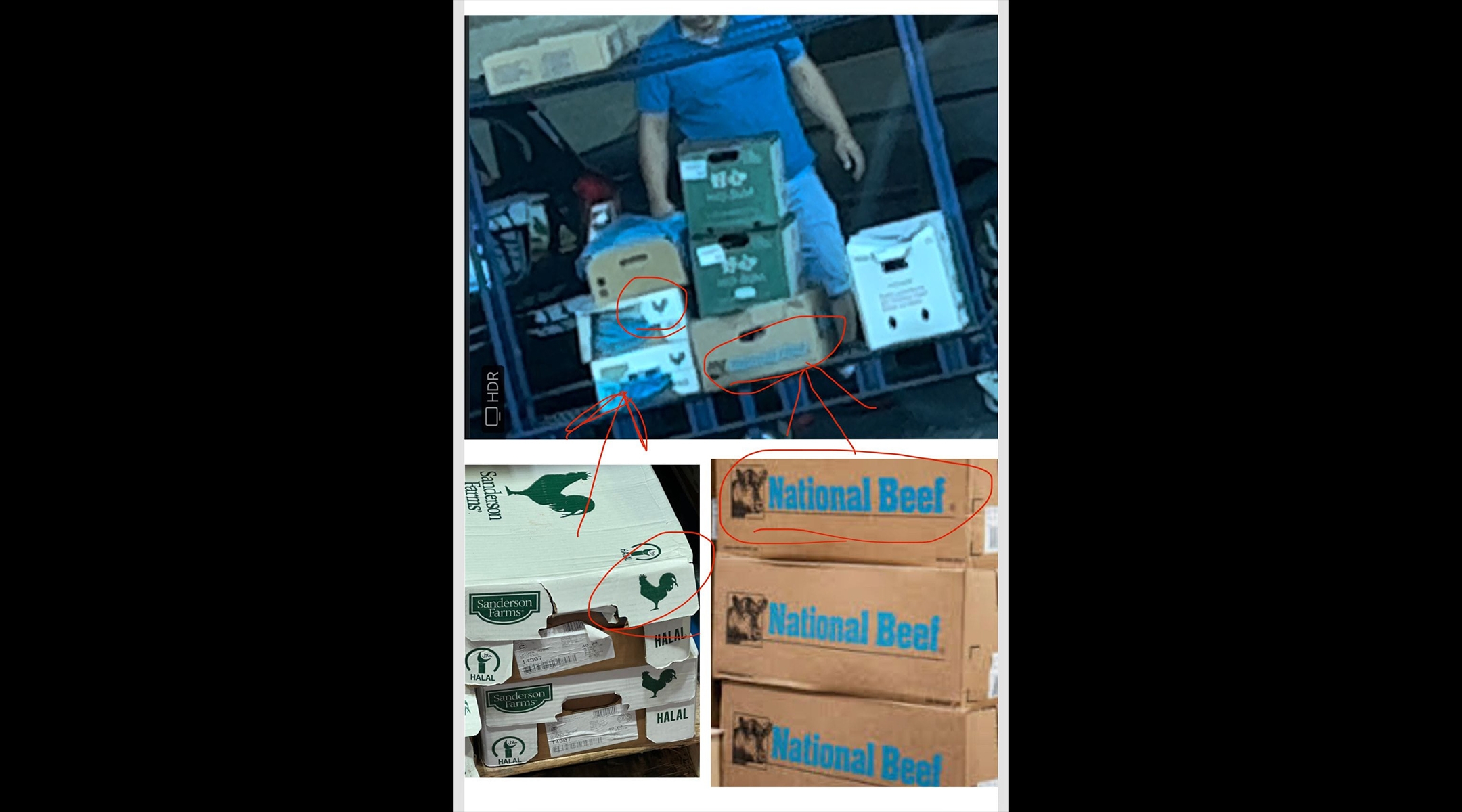 Shain, meanwhile, has posted warnings about the Manalapan restaurant not being kosher on his blog ever since he stopped working there. He was concerned, he said, that the owner had a key to the establishment.

In OK Kosher’s most recent statement, they said that the mashgichim, the kosher supervisors, “were the only people who had keys to the [New Jersey] restaurant, refrigerators and freezers.”

A mashgiach who has intimate knowledge of the Brooklyn restaurants and the certification process and who asked not to be named told the New York Jewish Week that he heard that the mashgiach in Manalapan “does not have the key.”

“In Brooklyn, the mashgiach has the key to the restaurant,” he said. OK Kosher “are very strict about it.”

The same mashgiach also added that he had been in touch with OK Kosher about what happened in Manalapan.

“They said ‘we have to raise our standards and keep an eye on what’s going on and just be vigilant about it,’” he said

Shain said the person who sent him the pictures and video of the violations in Manalapan works in the food industry and does purchasing at Restaurant Depot, a store where restaurant owners can buy food in bulk. This person also ate at the Manalapan store and is familiar with the owner, Shain maintained.

“He recognized the owner of the restaurant buying the meat and chickens,” Shain said. “He sent me a video about it because he knew that if there’s anything he can do about it, it’s me.”

Shain has a history of catching restaurants who are violating the laws of kashrut.  Four-and-a-half years ago, another restaurant in New Jersey went out of business after he warned about their kosher violations.

Rabbi David Rosenthal, who runs an educational organization called Manalapan Jewish Connections, told the New York Jewish Week that he had eaten at Kosher Chinese Express and was “shocked” to find out what happened.

“I felt horrible that we have potentially been eating non-kosher for so long,” Rosenthal said.

He added that he was in contact with OK Kosher, who told him to “assume that there was non-kosher meat in the store.”

“People don’t realize that even if you’ve done something by accident, it requires repentance,” Rosenthal said.

Rosenthal also confirmed that the man in the initial video shared on Facebook is the owner of the Manalapan restaurant. “I’ve seen him often,” he said.

Rosenthal held an event in the area on Thursday about repentance and moving forward to discuss how to proceed as a community.

“On one hand, it’s nearly impossible for any kashrut organization to prevent someone who is intent on defrauding their customers,” Klein said. “This is not unique to the kosher industry. On the other hand, kosher consumers will want to know what the certifier intends to do to prevent a situation like this happening in the future with their existing certified businesses.”

In OK Kosher’s statement, they recommend that “customers of Chinese Express that have purchased any of their products in the past six months and used any of their personal utensils are advised to Kasher those utensils.”

“Please reach out to your personal Rav for guidance and further instructions,” the statement said.  “We are deeply saddened by this revelation and we are thankful and appreciative to the keen observer who brought this to our attention.”