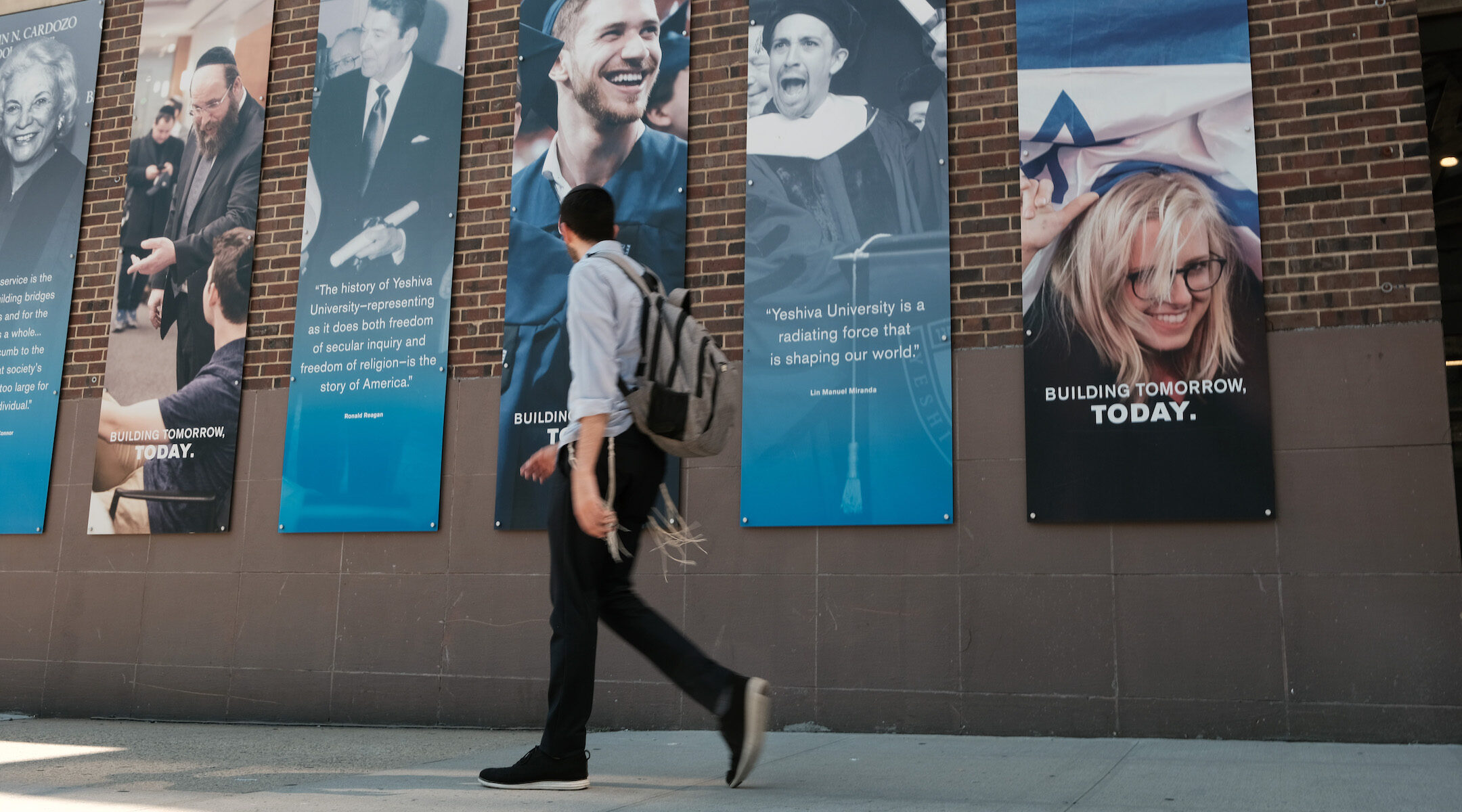 A pedestrian on the campus of Yeshiva University in New York City on Aug. 30, 2022. (Spencer Platt/Getty Images)
Advertisement

(New York Jewish Week) – Days after the Supreme Court ruled that Yeshiva University must allow an official LGBTQ pride club on campus, the administration suspended all student clubs for the time being.

The Friday afternoon email to undergraduate students was brief. “Considering the upcoming Chagim [holidays], the university will hold off on all undergraduate club activities while it immediately takes steps to follow the roadmap provided by the US Supreme Court to protect YU’s religious freedom,” read the email, which came from Student Activities.

On Wednesday, the Supreme Court denied YU’s stay motion in its ongoing efforts to block the LGBTQ club, meaning Y.U. would have had to recognize the YU Pride Alliance while litigation continues in lower courts. The Modern Orthodox university appears to prefer that none of the campus’ 90 or so clubs function, perhaps until the case is resolved. 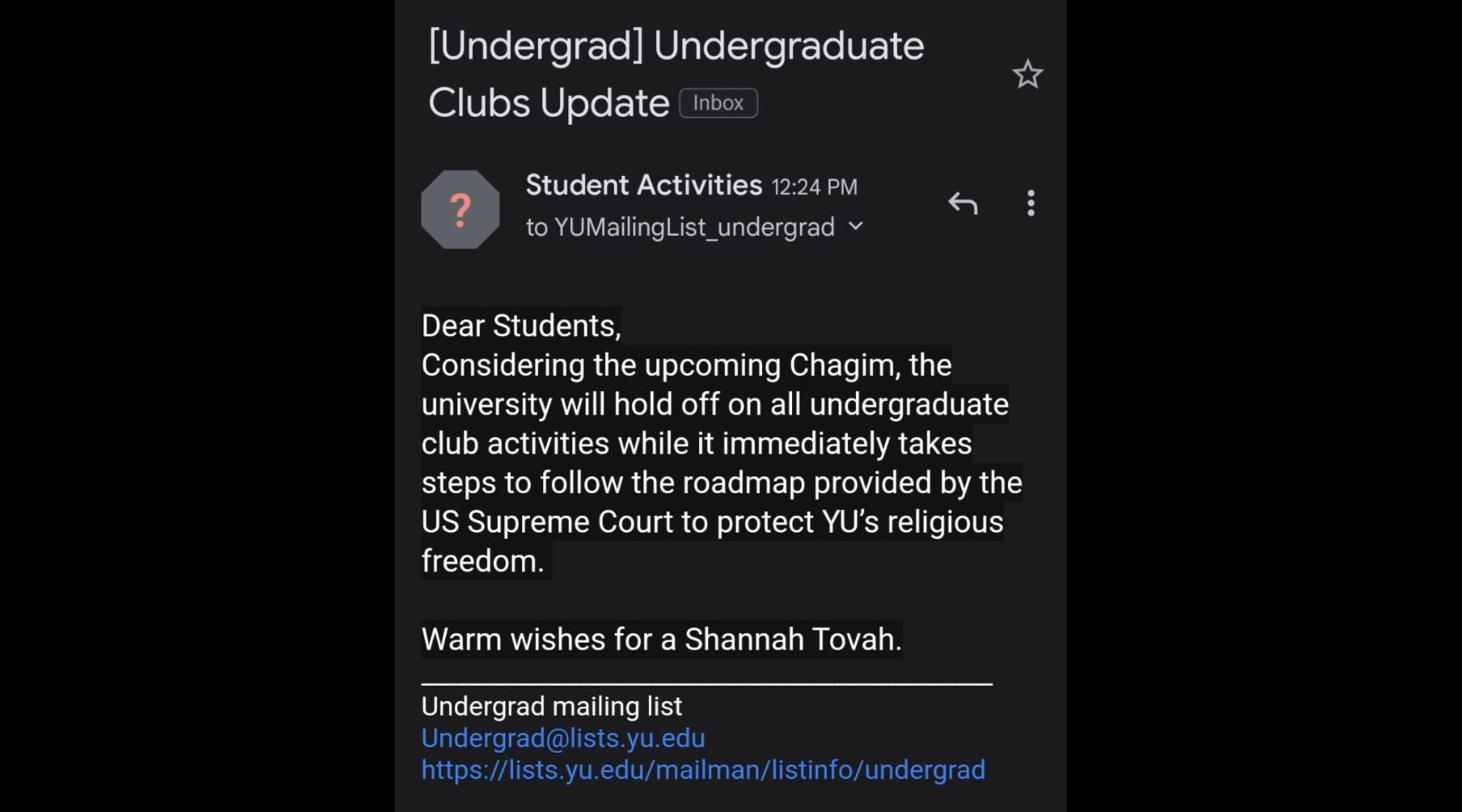 In a Friday afternoon email, YU announced to undergraduates that it would suspend all student clubs for the time being. (Screenshot)

Undergraduate clubs and organizations across both the Wilf and Beren Campuses in Washington Heights and Murray Hill include intramural sports teams, Students Against Sexual Assault, the Rubik’s Cube club, surfing club and more.

The YU Commentator reported swift backlash from student leaders. “Clubs are an essential aspect of the YU experience and putting them on hold interferes with all of the positive opportunities and experiences that students gain from clubs,” said Meital Lindenberg, the student council president of Stern College, Y.U.’s affiliated all-women’s college.

Baruch Lerman, the president of the Yeshiva Student Union, told The Commentator that the administration has not given any further information to club leadership. “We were not expecting the university to take this drastic measure, and have not received any guidance about how we are to proceed with approving clubs, or having student council events,” he said.

Rachael Fried, a Y.U. alum and the director of Jewish Queer Youth, an organization that has been supporting the YU Pride Alliance in its bid for recognition, criticized the latest move. “Stern afforded me the opportunity to serve as president of the student body in a shomer Shabbos and Torah environment — I certainly would not have been able to do so in another university,” she told the New York Jewish Week, using terms meaning religiously observant. “I do not believe I would have attended YU undergrad had there not been student council or student clubs in which I could participate.”

“To postpone all student clubs, leadership, and essentially all student-led initiatives on campus in order to avoid allowing queer students to create community and share pizza in a dignified way is wrong, cowardly, and shameful,” Fried said.

Gay sex is forbidden by nearly all Orthodox interpretations of Jewish law, although attitudes toward individuals who identify as queer have eased somewhat in many Modern Orthodox settings in recent years. In its charter, Yeshiva University is incorporated as a secular institution, a change made in the late 1960s in order to receive government funding and public grants. It was on this basis that a New York court ruled that Y.U. violated the New York City Human Rights Law by not allowing an LGBTQ pride club on campus.

Y.U. claims that as a religious institution it should be exempt from the Human Rights Law, and that the state’s ruling was a violation of its religious liberty under the First Amendment.

When asked for comment, Y.U. referred the New York Jewish Week to a press statement made by President Ari Berman on Sept. 14, in reference to the Supreme Court’s latest ruling.

“Every faith-based university in the country has the right to work with its students, including its LGBTQ students, to establish the clubs, places and spaces that fit within its faith tradition. Yeshiva University simply seeks that same right of self-determination,” Berman wrote.

“The Supreme Court has laid out the roadmap for us to find expedited relief and we will follow their instructions. At the same time, as our commitment to and love for our LGBTQ students are unshakeable, we continue to extend our hand in invitation to work together to create a more inclusive campus life consistent with our Torah values,” he added.

Some observers suggest that the case may soon be headed back to the Supreme Court, whose conservative majority has been sympathetic to religious liberty appeals.

More than 130 faculty, students and alumni have signed an open letter and petition urging the administration to pull back on its efforts to block the Pride Alliance. “We call on YU to stop the escalation and listen to its LGBTQ+ students so this conflict can be resolved peacefully and privately and so LGBTQ+ Jews will get the full recognition and support they deserve in their Jewish communities,” says the public petition, which is being sent around the community as a Google form.

“This YU is unfamiliar to us. It has aligned itself with religious communities and interests outside our own, instead of looking inward. It has made an opponent of fellow Jews, instead of bringing them closer. It has deployed our sacred Torah values in service of goals our Torah does not sanction. And now, as this bitter conflict widens across the reshut ha-rabim — the public domain — we fear what comes next,” the letter states.