A decades-long love story inspired this Upper West Side sukkah 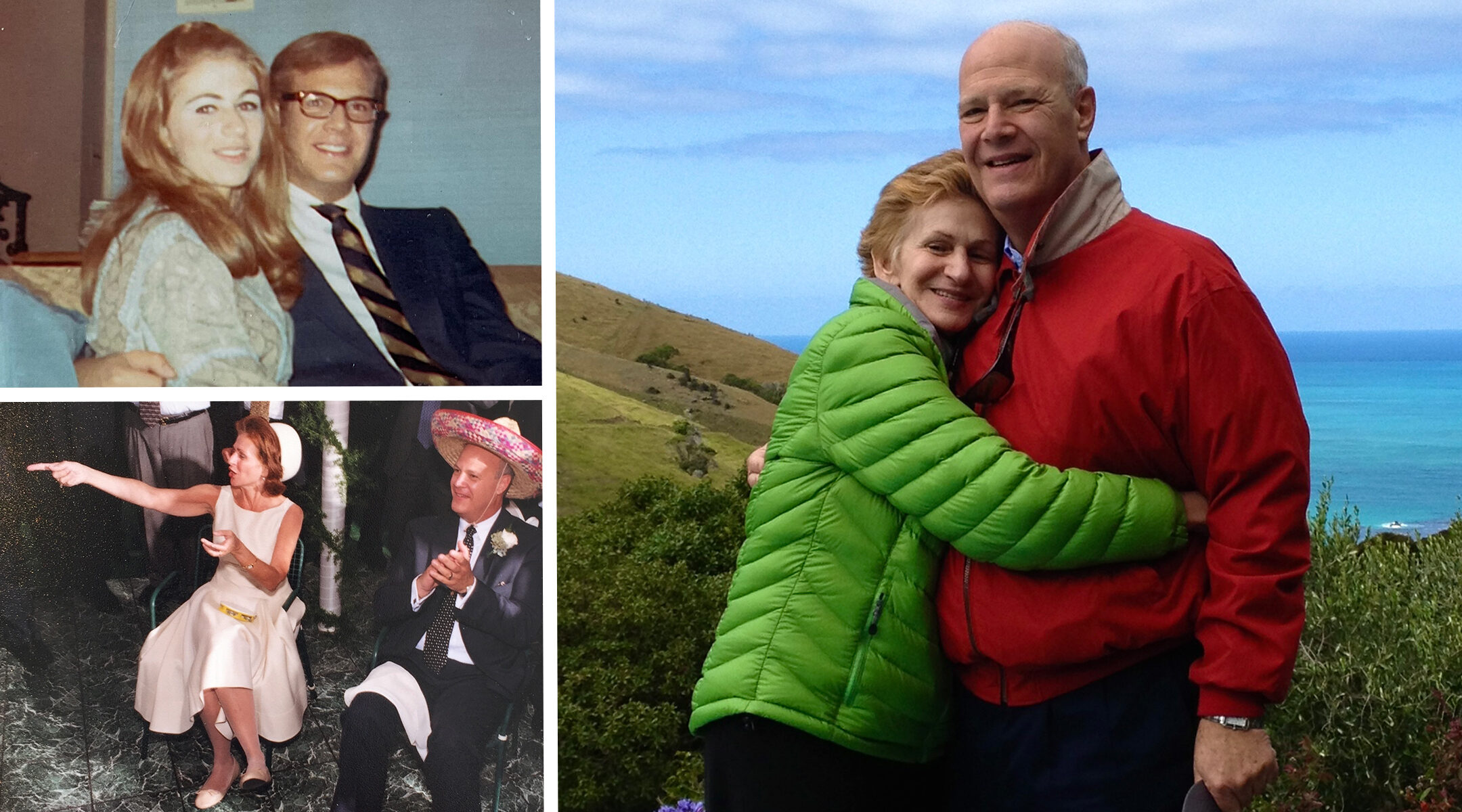 Zelda Stern and her late husband Stanley Rosenzweig. Clockwise from top left: The couple dated as teenagers in college in 1968. On vacation in New Zealand in 2015. At their wedding in 2001. (Courtesy Zelda Stern)
Advertisement

(New York Jewish Week) – A brand new sukkah, standing on the seventh floor terrace at the Marlene Meyerson JCC Manhattan on the Upper West Side, was made possible by a love story.

Designed to be a meditative yet inviting space, the booth will transform into a year-round indoor art installation once the holiday of Sukkot ends next week.

The unique sukkah was commissioned by Zelda Stern, 73, a philanthropist, feminist and advocate for female leadership in Orthodox settings throughout her life. The white-painted temporary dwelling is a tribute to her late husband, Stanley Rosenzweig, who died of prostate cancer in 2019 at age 70. It was designed and built by her close friend, the artist Tobi Kahn.

Sukkot, said Stern, was one of Rosenzweig’s favorite holidays. “Stanley, my late husband, loved Sukkot. He loved it so much. He used to build a Sukkah every year since he was a child,” Stern said, and throughout his life at his home in Philadelphia.

Stern and Rosenzweig’s love story was one that manifested only with time. The pair had met — and fallen in love — as students at Temple University more than 50 years ago. Eventually they parted ways and fell out of touch.

Through a mutual friend, the two reconnected in 2000 — Stern had never married, and Rosenzweig was a widower. The couple quickly picked up where they had left off three decades prior: Rosenzweig relocated to New York from Philadelphia so that the couple could get married, which they did in September 2001, and then made a home on the Upper West Side. Rosenzweig had been diagnosed with cancer less than a year into their marriage, and the couple subsequently decided to “speed up” their time together and live as fully and intensely as possible. The ensuing years were a flurry of activity: guests and friends frequently over for Shabbat dinner, adventures and vacations in Europe, New Zealand and elsewhere.

Following Rosenzweig’s death, Stern wanted to find a way to honor her husband with something that was just as blissful and intentional as he was, in a way that was as fated and loving as their relationship had been.

“This is so much him — the joy of Sukkot, the joy of family, the embracing quality of Sukkot and of Stanley,” she added. “I feel so good, so fulfilled, so joyful and so appreciative.” The weeklong harvest holiday is also known in Hebrew as “Z’man Simchateinu,” or the season of happiness.

Rosenzweig had moved to New York to be with Stern, and though Manhattan suited him in many ways, he deeply missed a few aspects of his Philadelphia home — namely, a garage for his car and a backyard for a sukkah.

Rosenzweig got used to not having a garage — the couple had a parking spot only a six-minute walk from their apartment, though it often took much longer because Rosenzweig stopped to chat with every doorman along the way. “He was so friendly,” Stern recalled.

Still, it was hard to find a way to build a sukkah, which was one of Rosenzweig’s favorite activities on one of his favorite holidays, a tradition he’d kept up since he was a child. “There’s no patio or anything,” Stern said of their apartment. “I always felt a little sad about that.”

During their marriage, the couple became friendly with the painter and sculptor Tobi Kahn and his wife, writer Nessa Rapoport, who also lived on the Upper West Side. Throughout Rosenzweig’s illness, which was diagnosed in 2002 and worsened in 2017, Kahn and Rapoport provided comfort and home-cooked meals, including a turkey dinner on Thanksgiving. “I didn’t even ask,” Stern said. “He just knew that’s what we needed.”

When Rosenzweig passed away, “the kindnesses only increased,” Stern said of Kahn and Rapoport. “It was just so nourishing and nurturing and comforting being in their home and not being alone, being with their family and friends.”

Stern knew what it was like to work with Kahn: At one point, she had commissioned from him an Omer counter, an interactive piece of Judaica that allows one to mark the 49 days between Passover and Shavuot. “He listens, and he’ll work with the people commissioning him, but without sacrificing his artistic vision, and that was very important to us,” Stern said.

“Tobi isn’t just ‘the artist on commission’ — he becomes your friend, and a good friend. As does Nessa and the whole family, their three children and son-in-law, so it’s a very unusual collaboration because it becomes a kind of familial one,” Stern said.

As their friendship deepened, Stern learned that it was Kahn’s longtime dream to build a particular kind of sukkah: one with smooth, intricately woven walls that could be converted into separate panels to be used as an art installation during the rest of the year.

Stern commissioned the sukkah as a thank you to Kahn. It wasn’t until she was deep in the process that she realized how fitting it would be as a memorial to her late husband as well. 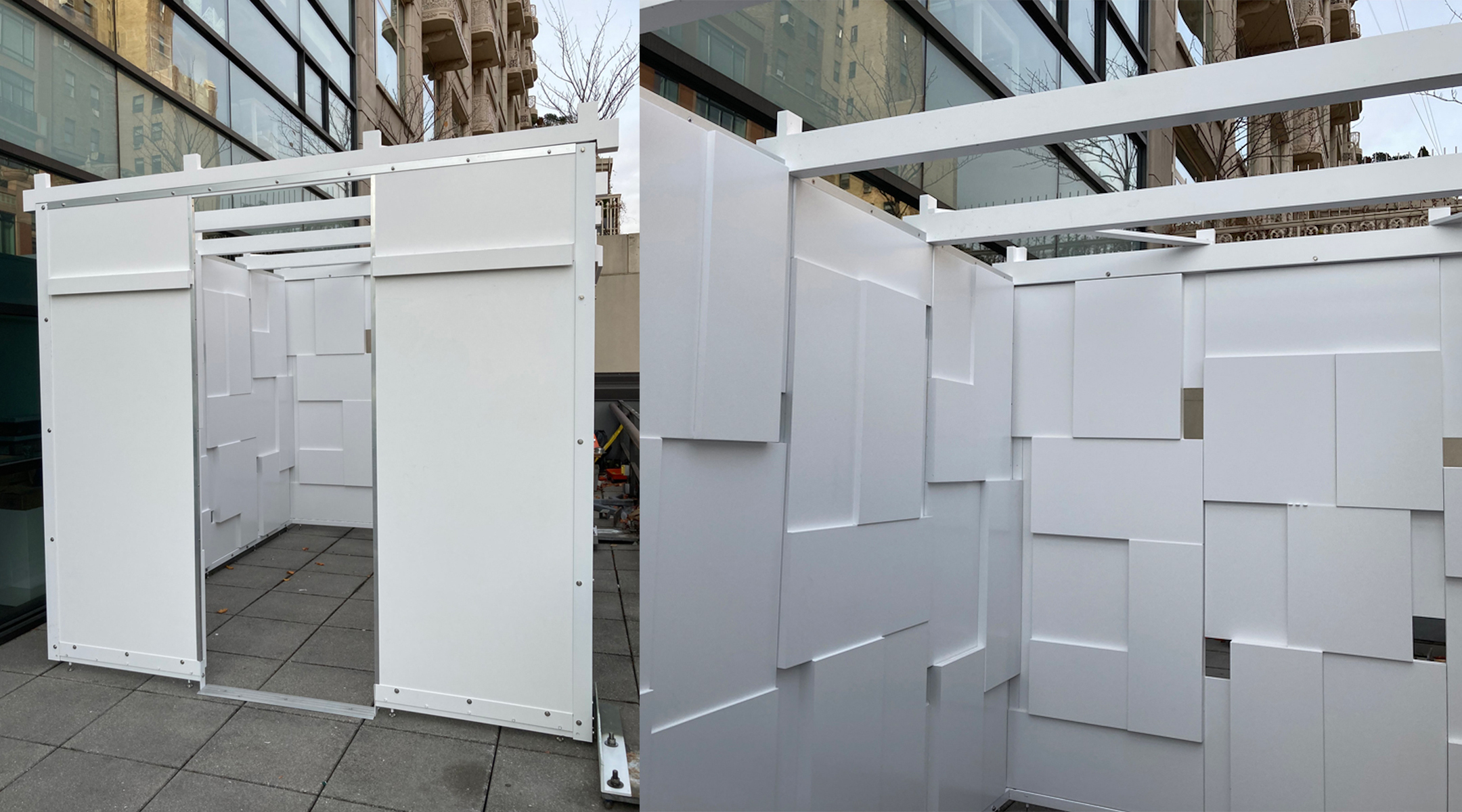 Called IMKHA, meaning “with you” in Hebrew, the sukkah is made of smooth, interlocking wooden panels. The blankness allows for each guest to imbue their own memories and projections into the space, the artist Tobi Kahn explained. (Tobi Kahn)

“A sukkah invites and welcomes the stranger and the non-stranger alike,” Stern told the audience during a recent panel discussion about the sukkah at the JCC. “This epitomizes Stanley, who was welcoming, warm, happy, nurturing, loving, engaging, and embracing everyone. He was in love with people and with life itself.”

For Kahn’s part, the creation of the sukkah, which he has been envisioning for nearly a decade, is something he knew he could only do when the opportunity felt right. A partnership with Stern was exactly that opportunity, as she agreed with Kahn that the sukkah should be open to the public and not designed for a private home.

Though the sukkah follows all the guidelines of halacha, or Jewish law, it is not adorned with the customary hanging fruit or homemade paper chains. Instead, Kahn said he wanted it to feel more like a clean “meditative space.” The sukkah consists of 13 interlocking wooden panels, each displaying a distinct textured and layered abstract pattern. The entire installation is pure white; the blankness, said Kahn, allows guests to fill the space with their own projections and memories. Small gaps allow the outside environment to blend in and peek through.

“I wanted the whole thing to look like kedusha, holiness,” Kahn said.

The name of the structure, IMKHA, means “with you” in Hebrew. “It’s based on more than one thing,” Kahn explained. “I’m not going to tell you how the name came to be, so that everyone can bring to it what they want. But you should know that Stanley is in there and Zelda’s love for him is in there.” And because the sukkah is designed to be repurposed and never placed in storage, it is, in a sense, always “with you.”

When Sukkot concludes next week, the walls of the sukkah will hang at the Makom Studio, a meditation and mindfulness space at the JCC dedicated to the late Rabbi Rachel Cowan, who brought healing and meditation into Jewish spiritual life. Cowan, who died in 2018, was a close friend and inspiration to both Rosenzweig and Kahn. “This is also bashert,” Stern said, using the Yiddish word for destiny. “I sometimes feel like Rachel and Stanley are asking questions and they’re having conversations in that room.” 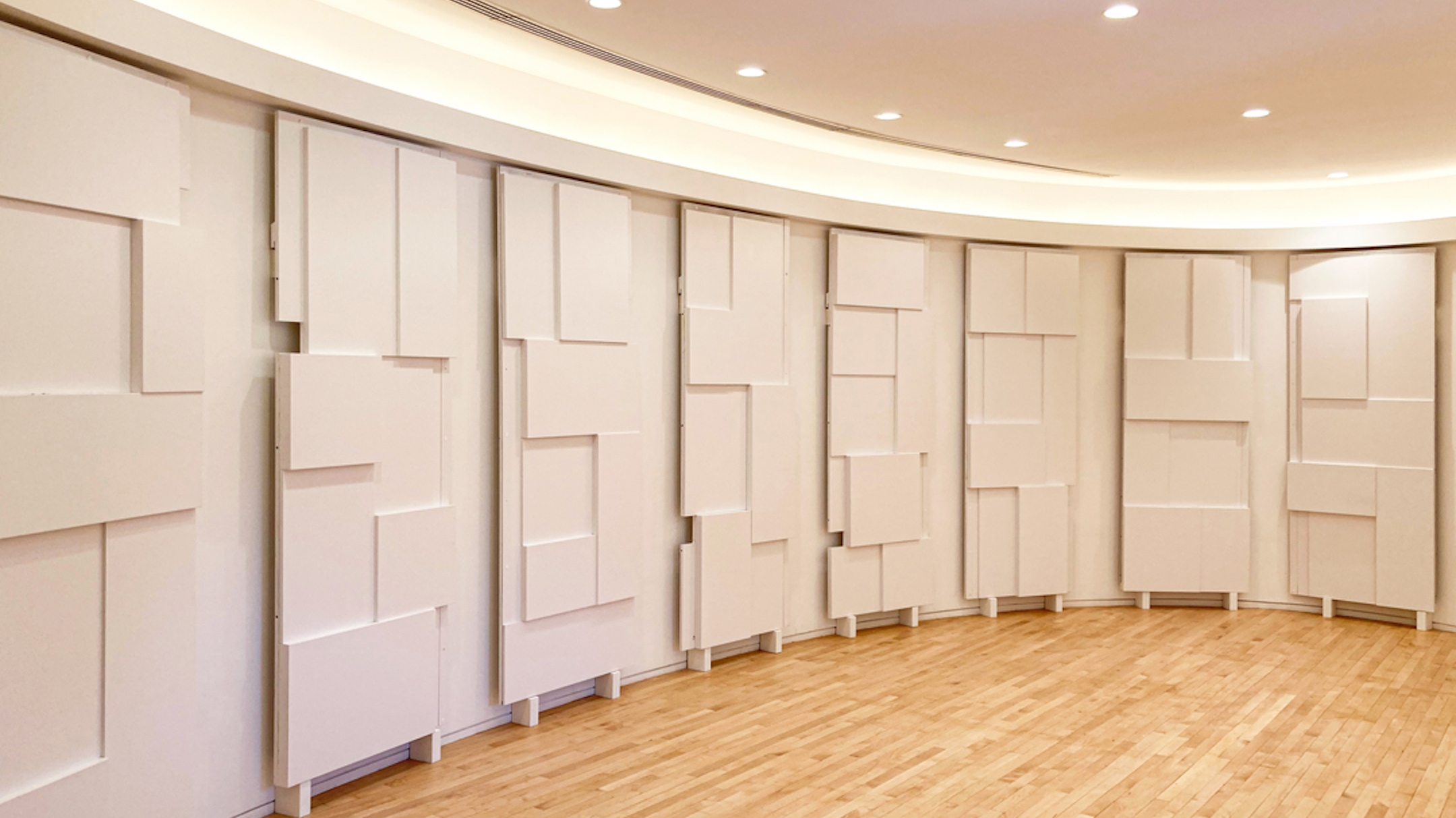 The panel of the sukkah will be open along the walls of the Marlene Meyerson JCC Manhattan’s meditation studio during the year. (Tobi Kahn)

“Not to sound hyperbolic, but I cry with joy,” Stern said about the opening of the sukkah, which took more than two years to create. “I cry with sadness because I miss him terribly. He was such a wonderful partner. But I feel he would be so happy to know that the sukkah that he wanted to build when we were married is built now.”

“What started out as a thank you to Tobi became a love story, really, and a way to honor Stanley in a way that I could never have imagined,” she said.

The IMKHA Sukkah is on view at the Marlene Meyerson JCC Manhattan, 334 Amsterdam Ave., through Sunday, Oct. 16 during regular JCC building hours.