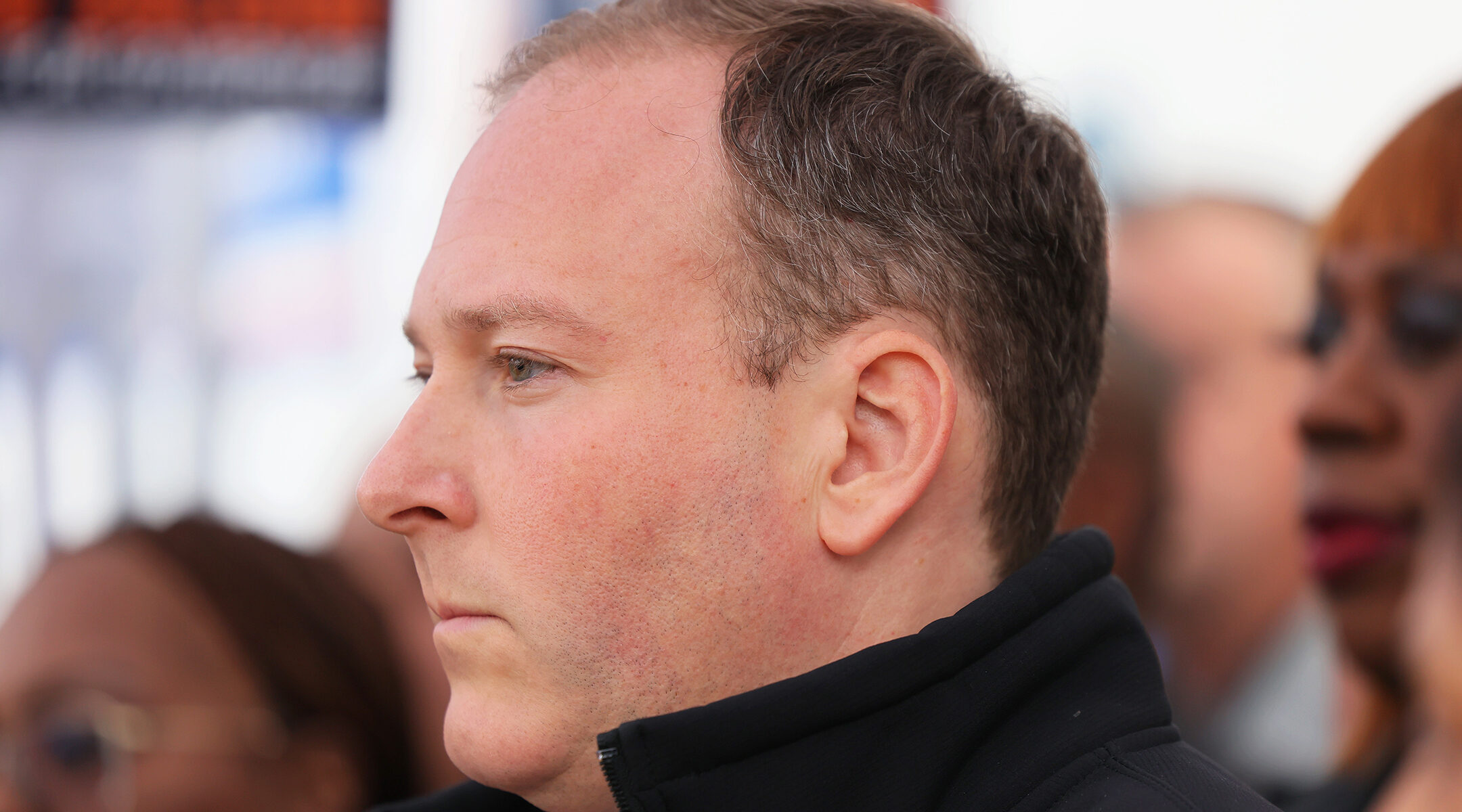 New York Republican gubernatorial nominee Rep. Lee Zeldin (R-NY) looks out into a crowd during a press conference at the entrance to the Rikers Island jail on October 24, 2022 in New York City. (Photo by Michael M. Santiago/Getty Images)
Advertisement

(New York Jewish Week) —  If Lee Zeldin pulls off an upset win over incumbent Gov. Kathy Hochul in the election next week, he will be the first Jewish Republican governor in New York State history.

If so, he probably won’t be able to thank the majority of the state’s Jews, who like Jews elsewhere, tend to vote Democratic and, polls show, tend to reject the kind of pro-Trump conservatism Zeldin represents. (Zeldin voted against certifying the 2020 presidential election results.)

And yet his tough-on-crime stance and hands-off approach to yeshivas has gained him considerable traction within the Orthodox community, a minority within a minority whose votes are coveted by politicians across New York. Although Zeldin’s own Jewish background is in the non-Orthodox denominations  —  he is the grandson and grand-nephew of prominent Reform and Conservative Jews — his conservative views have won him major endorsements from Hasidic and Haredi Orthodox groups in Brooklyn and the Hudson Valley.

The unequivocal and clear words that are being said again and again at every campaign stop by NYS Gubernatorial candidate @leezeldin about the rights of #religiouseducation for #Yeshiva students is reverberating in every Orthodox Jewish NYS household. pic.twitter.com/z3EH7e9YsP

Zeldin, one of two Jewish Republicans in the House of Representatives, was elected to Congress in 2014 after serving as a state senator. A resident of Shirley, a hamlet in Long Island’s Suffolk County, he is a member of the B’nai Israel Reform Temple in nearby Oakdale.

In an interview Friday, Zeldin, 42, told the New York Jewish Week that he attended Hebrew school at B’nai Israel as a child — and that his twin 16-year-old daughters, Mikayla and Arianna, had their bat mitzvahs there as well. (Although his Mormon wife, Diana, did not convert to Judaism, the Zeldins are raising their kids Jewish.)

“Growing up, my exposure to Judaism was across many different forms of Judaism,” Zeldin said. “That continued into and past college up into today.”

Asked about his upbringing in Shirley, Zeldin said it was sometimes Reform, sometimes Conservative, “depending on who [in the family] we were with.” In addition to B’nai Israel, the family often attended the Farmingdale Jewish Center, a Conservative synagogue that was founded by his grandfather, Abraham Jacob “Jack” Zeldin.

“My interactions, values, lessons, wisdom passed along, was most often passed along from my grandfather, Jack,” Zeldin said.

In a 2010 letter in support of Zeldin’s bid for the state Senate, Zeldin’s grandmother Jean wrote that she and Jack were “life-long Democrats,” but they still support their grandson, “even though he is a Republican.”

“He is the only Republican we have ever supported, not just because he is our Grandson, but because he is a wonderful human being and good Jew,” Jean Zeldin wrote. “There are not enough Jewish Republicans.”

Zeldin said the synagogues and congregations he interacts with now are “all across the spectrum,” but has had more involvement with Chabad and Modern Orthodox synagogues over the last few years.

“There are many important values that help build character when faced with a decision,” he told the New York Jewish Week in 2014, when asked how Judaism influences his way of thinking. “The best thing you can do when you have a strong sense of right and wrong is to do what your gut tells you is right.”

His great-grandfather Morris A. Zeldin was one of the founders of what is now UJA-Federation of New York, one of the largest Jewish organizations in the world. He was called a “a pioneer in the Zionist movement” in a 1927 New York Times obituary. Morris came to the U.S. in 1912 from Petrokov, Russia, and was close to a number of Jewish leaders worldwide, including the first president of Israel, Chaim Weizmann.

Lee Zeldin’s great-uncle, Isaiah Zeldin, was a prominent rabbi who moved from Brooklyn to Los Angeles in 1954. Isaiah Zeldin grew up with his father, Morris, in a “Zionist, Hebrew-speaking household,”  the Jewish Journal, a local weekly, wrote in 1995.

When Isaiah died in 2018 at the age of 97, Lee Zeldin invoked his great-uncle’s name on the House floor, calling him “Uncle Shy,” a nickname for Isaiah.

“His father’s picture, Morris, is in my office,” Lee Zeldin said in his remarks, adding, “We will honor you, your legacy and your impact for generations to come.”

Isaiah also had a relationship with prominent politicians over the years, foreshadowing his great-nephew’s career in public office. The rabbi had his photo taken with Presidents George Bush and Bill Clinton, as well as former Secretary of State Henry Kissinger.  Local council members also came to his synagogue to speak.

The Jewish Journal article said that Isaiah had “a reputation as a right-winger as far as Israel is concerned.” This stance may inform some of Lee Zeldin’s policies toward Israel — the candidate is a strong supporter of the Jewish state and has spoken out against the Iran deal.

Zeldin said his communications with his relatives were always “personal, not political,” adding that his interactions with Isaiah became less frequent throughout Zeldin’s life.

“When we did have an opportunity to interact, it was a very meaningful time that was spent together as a family,” Zeldin said. “These weren’t political interactions, they were personal family interactions.”

As the rare Republican Jew in Congress, the candidate noted that he “wouldn’t paint all Jews with one broad brush.”

“I wouldn’t paint the entire Jewish community one way or the other,” Zeldin said. “People have different priorities. In the halls of Congress, there are far more Jewish Democrats, and in many respects, we have found many opportunities to be able to work together on issues where we can find common ground.”

In 2017, Zeldin introduced the bipartisan Israel Anti-Boycott Act, which would allow states to block contractors who support the anti-Israel boycott. It still has not been passed.

Lee Zeldin’s other great uncle, Bernald Zeldin, 98, was the founding president, in 1959, of the Jewish Center of the Hamptons. Today, the Reform synagogue meets in an architecturally significant building in East Hampton and is known for its Friday night services on the nearby beach.

Recalling the synagogue’s founding in an essay obtained by the New York Jewish Week, Bernard Zeldin called it “a labor of love — a love for the Jewish people, a love of the Jewish religion, a love for my Jewish heritage, and a love for the State of Israel — all passed down to me from my Mother and Father.”

The Jewish Center of the Hamptons’ current rabbi, Joshua Franklin, told the New York Jewish Week in an emailed statement that “there is not much to say” in regards to the temple’s relationship to Rep. Zeldin.

“He has visited a few times in the past, I believe, and his family was here when we honored Bernie Zeldin in 2019,” Franklin said.

Lee Zeldin, an only child, was born in 1980 to Merrill Schwartz and David Zeldin. He graduated from William Floyd High School in Mastic Beach in 1998 and went on to earn a bachelor’s degree from the State University of New York at Albany and a law degree from Albany Law School.

After serving in the army from 2003 to 2007 — which Zeldin said has informed his “outlook on foreign policy, understanding threats, and how to build and participate in a coalition of allies to get something productive done” — he launched his own law practice in 2008, where he worked until his election to the New York State Senate in 2010.

Most polls have Hochul ahead of Zeldin to win the election, but some have tightened over the last few weeks. As the momentum shifts, he has become a mainstay in Orthodox neighborhoods — holding large rallies, putting on tefillin with Hasidic voters and meeting with prominent rabbis across the state.

Despite his appeal among Orthodox Jewish communities on issues like crime
(he is a fierce opponent of cash bail reform) and yeshivas (he opposes new state regulations that would tighten oversight of how secular subjects are taught at the private Jewish schools), Zeldin has not always supported the social safety net issues important to a community with a high poverty rate. The Orthodox community constitutes some of New York’s poorest families, who depend upon programs that provide billions of dollars in federal funds, such as the Supplemental Nutrition Assistance Program and housing assistance.

Yet Zeldin has consistently voted no on extending government programs like social security and Medicare. Zeldin voted against a bill that reauthorized block grants for anti-poverty activities. In November 2021, he voted against the Biden plan that provides money to expand social safety programs, lower health care costs and Medicare expansion.

When asked what he would do to help low-income Orthodox families, Zeldin brushed off the line of questioning. “There are so many generalities and stereotypes in that question,” Zeldin said. “I don’t even know where to start. It’s a massively loaded question.”