In backing Zeldin for governor, NY’s Orthodox community showed its limitations — and its strength 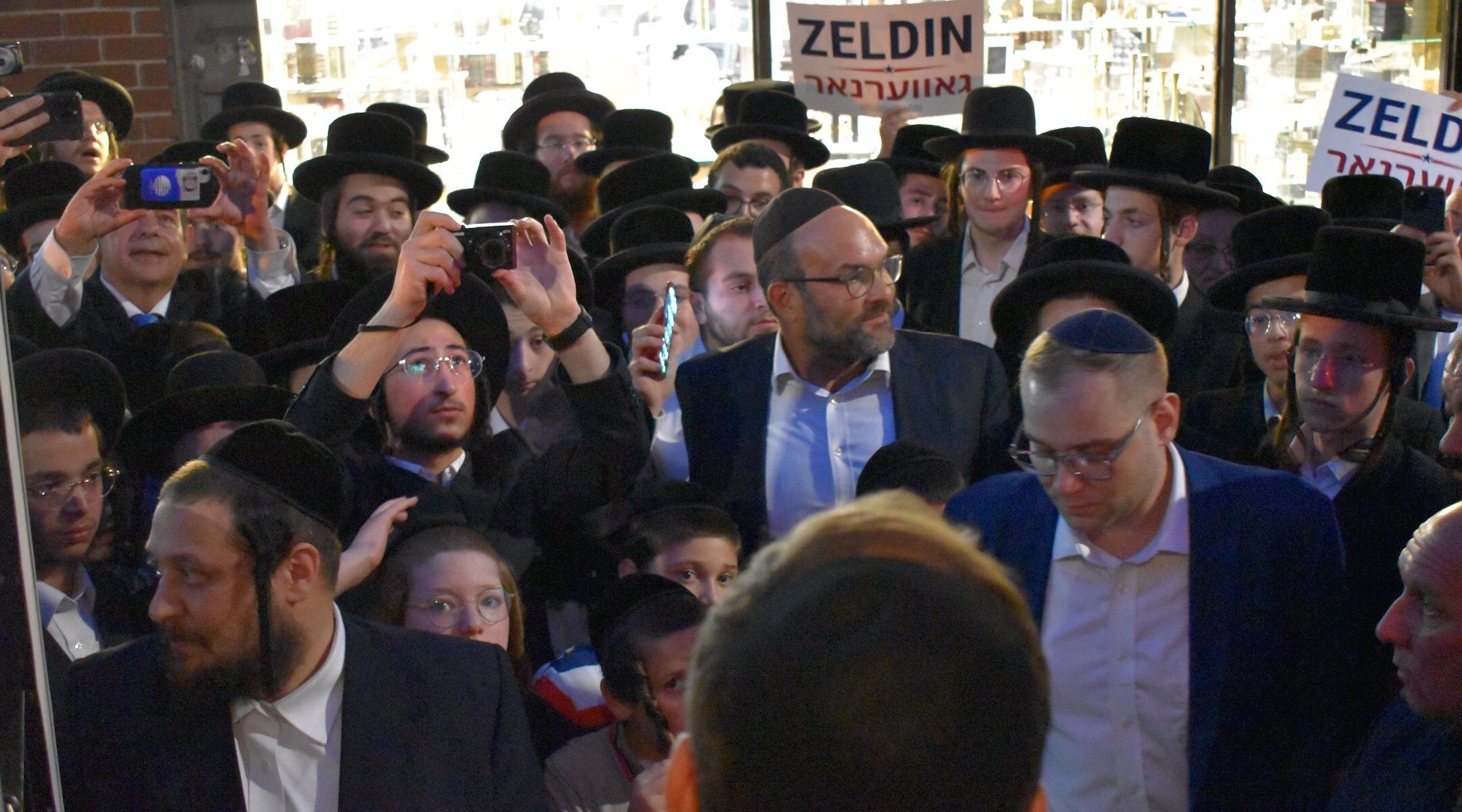 Rep. Lee Zeldin, the Republican candidate in the New York governor's race, appears before a crowd of Jewish supporters in Brooklyn, Sept. 20, 2022. (@leezeldin via Twitter)
Advertisement

(New York Jewish Week) — One day after Kathy Hochul was elected to her first full term as New York’s governor, a prominent Hasidic leader explained why he bet on what turned out to be the right horse in a tight race.

“People are telling me that I won,” Teitelbaum said, according to a translation from the Yiddish that circulated on Twitter. “I didn’t win, I was just thinking straight. Everybody else got into this Trumpism, this Trump craze, people couldn’t think straight anymore. Most of the Orthodox Jewry was brainwashed. Politics is not our way.”

Teitelbaum is leader of a faction of the divided Satmar Hasidic movement centered around Kiryas Joel in Orange County, the largest Hasidic community of New York State.

Unlike many other haredi Orthodox leaders in the state, Teitelbaum resisted Zeldin’s outreach to the Orthodox, and seemed less impressed with the Jewish Republican’s views on crime and yeshiva education than he seemed worried about Zeldin’s vote against certifying the results of the 2020 election.

It’s not clear if their support for Zeldin will hurt the other Orthodox communities, who turned out in high numbers for the Republican in Tuesday’s midterm elections. But it does suggest they have some fence-mending to do. And it led some in the community to boast that, despite a disappointing result, it demonstrated the clout of their community.

“We had massive turnout,” Michael Fragin, a senior adviser to the chairman of the New York State Republican party, told the New York Jewish Week. “That is a very net positive for the Orthodox community. It’s something that will be in play when you have City Council races and other local races.”

Josh Mehlman, the chairman of the Flatbush Jewish Community Coalition, which endorsed Lee Zeldin in the race, told the New York Jewish Week that he “has no regrets.”

“We stood up for what we know is right,” Mehlman said, adding that the Orthodox community was galvanized after the New York Times reported on yeshivas that were not meeting state standards for secular education.

When the hateful agenda-driven @nytimes demonizes our culture and our traditions, we don’t just protest. WE VOTE‼️

“The most fundamental concern for every member of the Jewish community is education, our ability to teach the next generation in the way that we have been taught,” Mehlman said. “We have no regrets for making our voices heard. That is what American democracy is all about.”

Data collected by The City news site confirmed the haredi swing for Zeldin. In Borough Park, a heavily Jewish area of Brooklyn, every election district voted at least 90% for Zeldin, with some areas reaching up to 97% of the vote.

South Williamsburg supported Zeldin in the 90% range, with some nearby showing slightly less at 70%. (Teitelbaum’s Hasidic faction counts a number of followers in the area.) Gentrified North Williamsburg, with far fewer Orthodox Jews, turned completely blue for Hochul.

Orthodox voters have tended to lean Republican in recent years, especially in national races, but have also been known to split tickets or back local Democrats who have delivered for their community.

Mehlman added that he “looks forward to working with the governor,” calling her “smart and capable.”

“During the election season, there are different sides,” Mehlman said. “But once the election is over, we all have to come together and work together to advance the needs of our community.”

While Zeldin lost, Republicans did well in areas with large Orthodox populations.

In southern Brooklyn, Democratic candidates lost seats to new Republican challengers. Steven Cymbrowitz, who has served in the Assembly since 2000, lost his Sheepshead Bay seat to Republican Michael Novakhov.

Humble in victory, gracious in defeat. I want to thank @RepSeanMaloney for his decade of service to the Hudson Valley and for his gracious call to me this morning. Campaigns are tough and he was a tough, and worthy opponent. I wish Sean and Randy well in their future endeavors. https://t.co/BpDFVt3ptD

Mehlman said that the FJCC had worked with many of these Democratic representatives for years.

“It’s unfortunate that they got swept up and lost their seats,” Mehlman said. “There’s a risk that when moderate Democrats lose, then the more radical members of the legislature may feel empowered and have the ability to advance legislation that’s not to our community’s interests.”

“Having a strong presence at the top of the ticket is critical,” Fragin said. “All parties should take notice, both Republicans and Democrats, that this is one of the few swing votes out there.”

Fragin added that political participation from Orthodox voters was “historic” for a midterm election.

“I don’t believe people were voting against Kathy Hochul,” Litwack said. “There were feelings in New York related to the New York Times and its treatment of the community, related to the ongoing discussion of yeshiva education. That is what drove people to the polls.”

Litwack didn’t comment directly on Teitelbaum, but pointed to other states, saying that there was record turnout in Pennsylvania by the Orthodox community in support of Democrat Josh Shapiro, who beat far-right Republican Doug Mastriano in the governor’s race. In that state, said Litwack, the Orthodox community voted blue.

“Jewish communities are turning out in big numbers across the country,” Litwack said. “They’re doing it for Democrats and Republicans. They’re starting to raise their voice and be more politically active.”

“She’s going to view this as a community who is becoming more and more politically active across the state of New York, one that she will continue to fight for.”

Alex Rapaport, the executive director of kosher food pantry Masbia, who is himself haredi Orthodox, said that in his community, “people were in pain.”

“This pain creates a fogginess that are sometimes false promises,” said Rapaport, who is politically active in Borough Park and hosts yearly candidate roundtables. He supported Hochul in the election.

However, Rapaport called the notion of an Orthodox voting bloc “xenophobic.”

“It’s used to mask a fear of the unknown,” Rapaport. “We are not a bloc. We have particular needs. One person does not decide for everyone to vote.”

Rapport also said that even though Zeldin lost, the community still demonstrated its political power by showing up to the polls.

“I don’t see the people in the community who went with the losing candidate as losing,” Rapaport said. “They didn’t lose, they showed strength on an issue.”