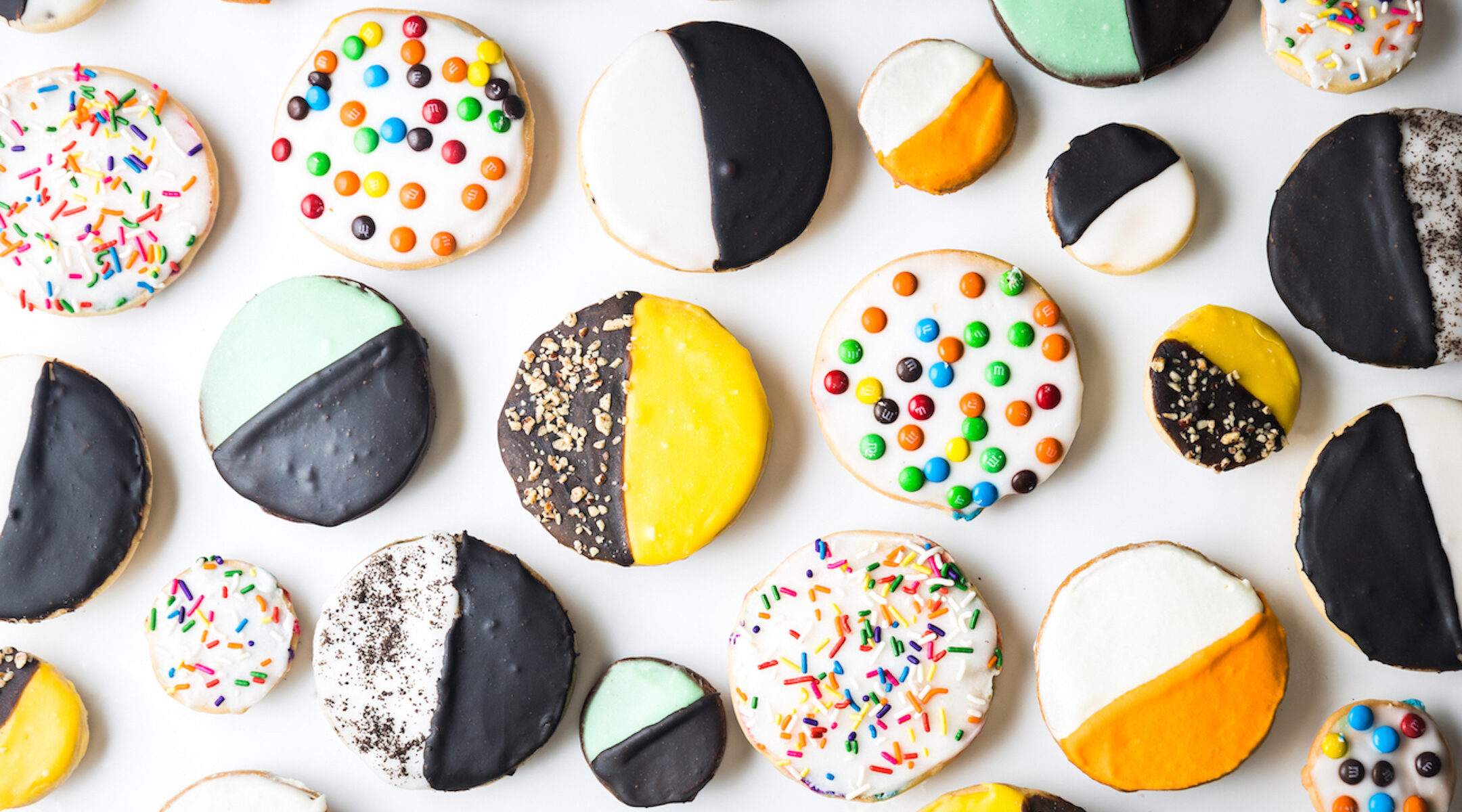 Zaro's Family Bakery, which opened in the Bronx in 1925, is now in the fourth-generation of family ownership. This winter, they released six new black and white flavors: an orange-and-white cream cheese frosted carrot cake, a brown and yellow banana chocolate hazelnut, a green and black mint chip, an M&M-topped cookie, a sprinkle filled birthday cake flavor, and a cookies and cream cookie. (Zaro's Family Bakery)
Advertisement

(New York Jewish Week) – As far as New York Jewish desserts go, perhaps the most ubiquitous is the black and white cookie, that soft, sweet, frosted treat found at bakeries and bagel stores throughout the city.

Black and white cookies, sometimes called half-moon cookies, are understood by most to be a Jewish dessert. “Seinfeld” once dedicated an episode to singing their praises. “You see, Elaine, the key to eating a black and white cookie is that you wanna get some black and some white in each bite,” Jerry says. “Nothing mixes better than vanilla and chocolate. And yet still somehow racial harmony eludes us. If people would only look to the cookie, all our problems would be solved.”

But now, in a testament to New Yorkers’ innovation — or possibly the old adage, “everything old is new again” — bakeries across the city are riffing upon this tried-and-true classic. These days, black and white cookies are available in a myriad of colors and flavors: yellow and blue to support Ukraine, red to celebrate Valentine’s Day, brown and yellow to mark the merger of banana, chocolate and hazelnut. 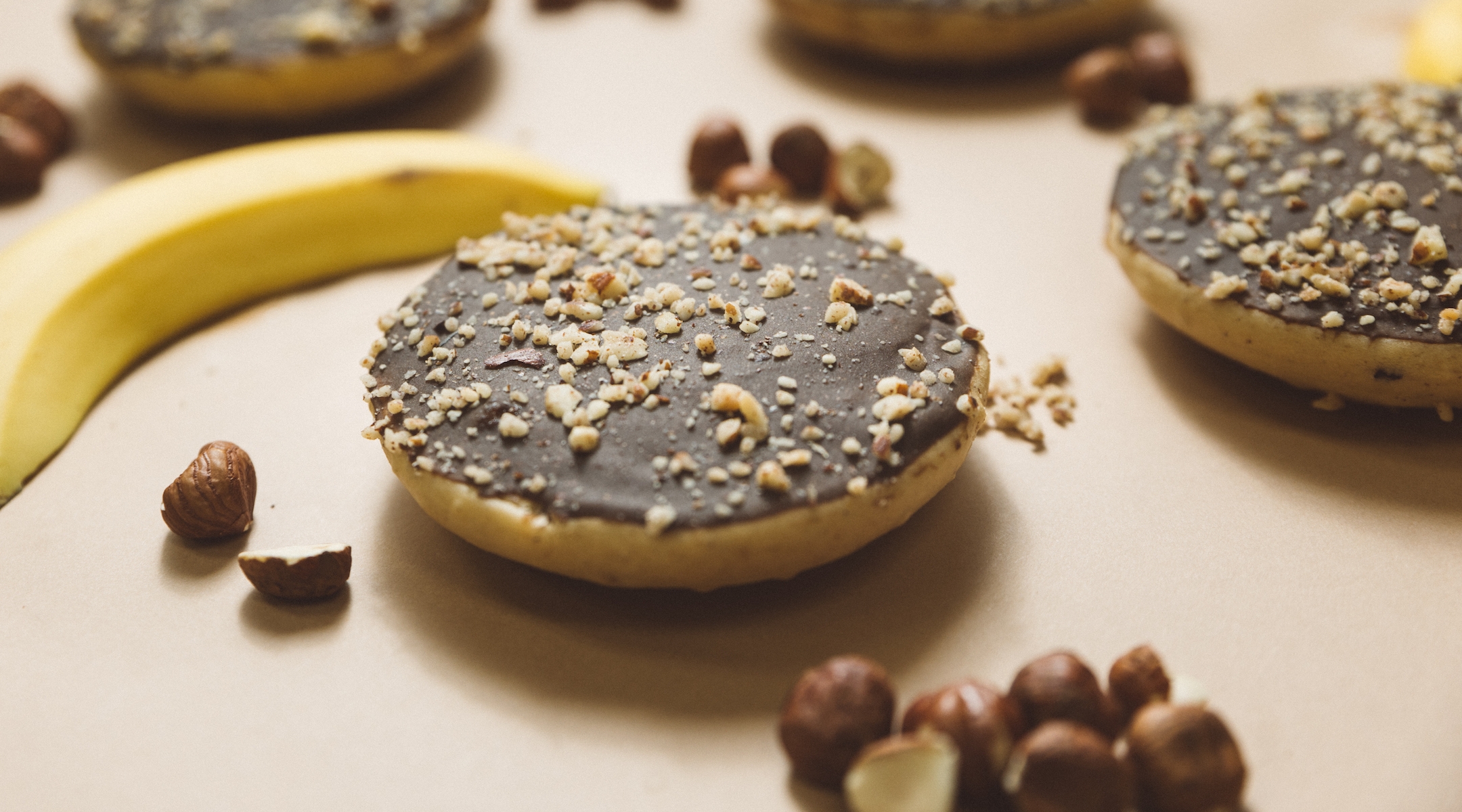 The latter is one of six new flavor combinations at Zaro’s Family Bakery, where brothers and fourth-generation owners Brian, Michael and Scott Zaro have wholeheartedly embraced new versions of the two-tone classic. Earlier this month, the bakery unveiled its new black and white cookie color and flavor combinations, which include orange and white (cream cheese frosted carrot cake), green and black (mint chip), as well as an M&M-topped cookie, a sprinkle-filled birthday cake flavor and a cookies and cream flavor.

“We’ve been making the black and white cookie for 95 years,” Brian Zaro, who has been working full time for his family’s business since 2006, told the New York Jewish Week. “My brother, Scott, had a vision to make an iconic item that meets innovation.” 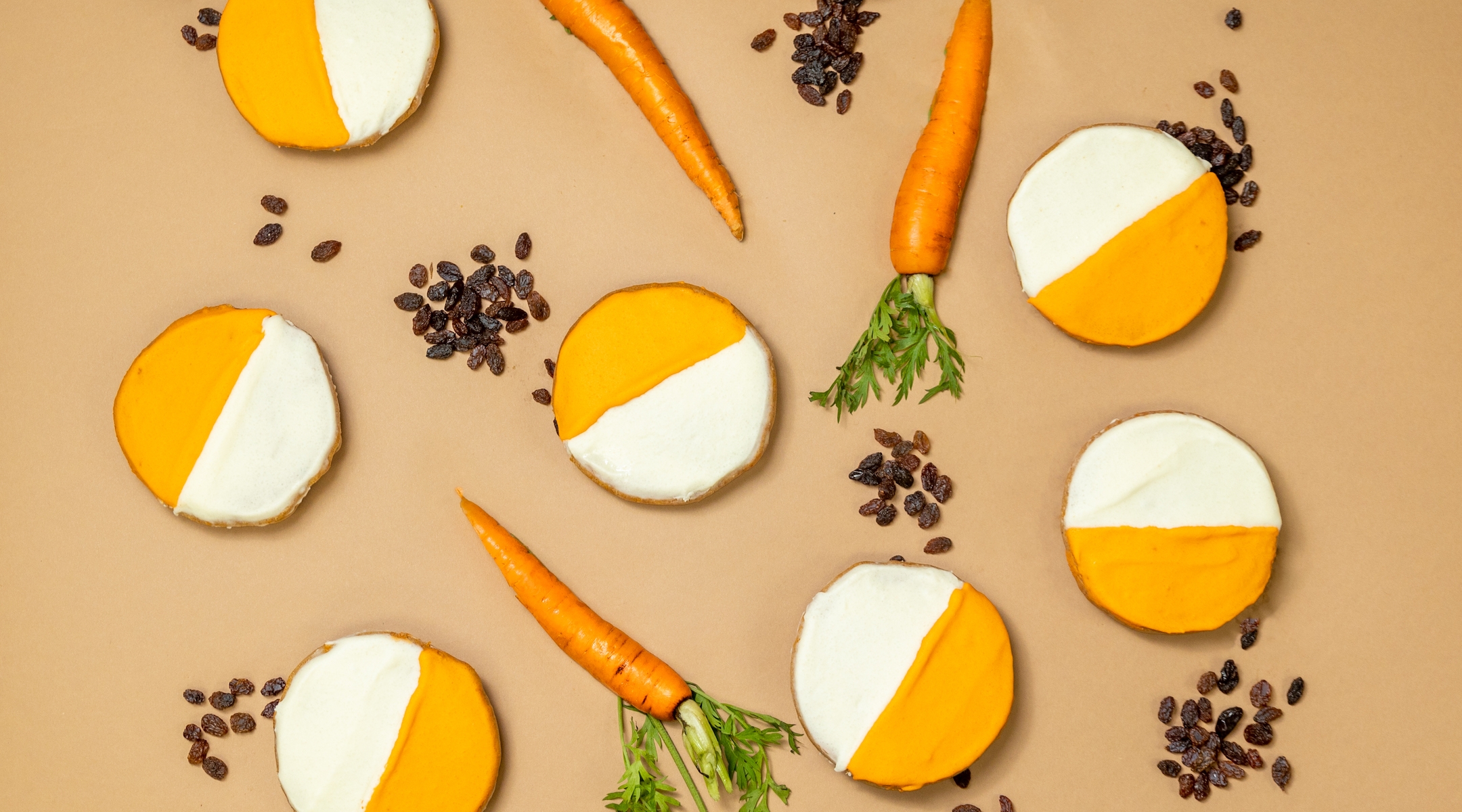 The black and white is one of the signature offerings at Zaro’s, which is known for setting up shop in New York’s biggest transit hubs, including Grand Central Terminal, Penn Station and LaGuardia airport. The bakery’s website boasts that it sells over 90,000 black and white cookies annually, and this season’s new flavors join Zaro’s chocolate chip black and whites, which they have been offering for several years, Brian said. (Black and white on the outside, with chocolate chips baked into the dough.)

“It’s a valid point,” Brian Zaro admits. “But right now, yes, it’s a black and white. That could change; we always try to be as open-minded as possible.”

Shannon Sarna, author of “Modern Jewish Baker” and editor at our partner site The Nosher, agrees. “I’m not a purist,” she said. “I don’t think they have to be black and white to be a real black and white cookie.”

For some, the doughy cookie with its signature bi-color frosting is only as good as the sense of nostalgia it offers. As the New York Times wrote back in 1998, “Today’s black-and-whites cannot compare with the black-and-whites of yesteryear, of course, just as no mayor will ever be as good at LaGuardia and no team as beloved as the Dodgers.” Sarna, who grew up in New York, calls black and whites “the cookies of my childhood.”

The black and whites as we know them were said to have been popularized by the Upper East Side’s Glaser’s Bake Shop, which was founded in 1902 by John Herbert Glaser. Glaser reportedly brought the black and white recipe with him when he immigrated to the United States from Bavaria.

Third-generation owner Herb Glaser, who ran the bakery with his brother until it closed for good in 2018, is not able to confirm this — but, at 70, he says that they were a feature of the bakery since he was a young boy.

Though he now lives “in the country,” Glaser is well aware of the new black and white trends. “Some of the businesses are making them a little too outrageous,” he said. “They’re not really black and whites anymore.”

Still, Glaser said that his bakery did occasionally make the cookies in different colors — for graduation parties, schools and, most notably, in orange and blue when the Mets were in the World Series in 1986. “I’m a traditionalist but I understand,” Glaser added. “It’s a marketing thing and that’s fine. It’s a way to stay in business.”

“I think there’s a sort of New York pride associated with it as ‘the New York cookie,’ and it just so happens to be a really good cookie,” said Noah Aris, the baker and proprietor of The Cardamom Man, which sells its baked goods online and at street markets. Aris bakes black and whites with blue and gold frosting as a fundraiser for humanitarian relief in Ukraine. In addition to lemon zest in the dough, Aris has added lavender, leaving the dough flecked with dots of purple.

The different colors “help start a conversation for me to talk about what I’m about as a bakery and raising money for Ukraine,” he said. “Then you hear [the customers’] story about their experiences with black and whites. It’s fun.” 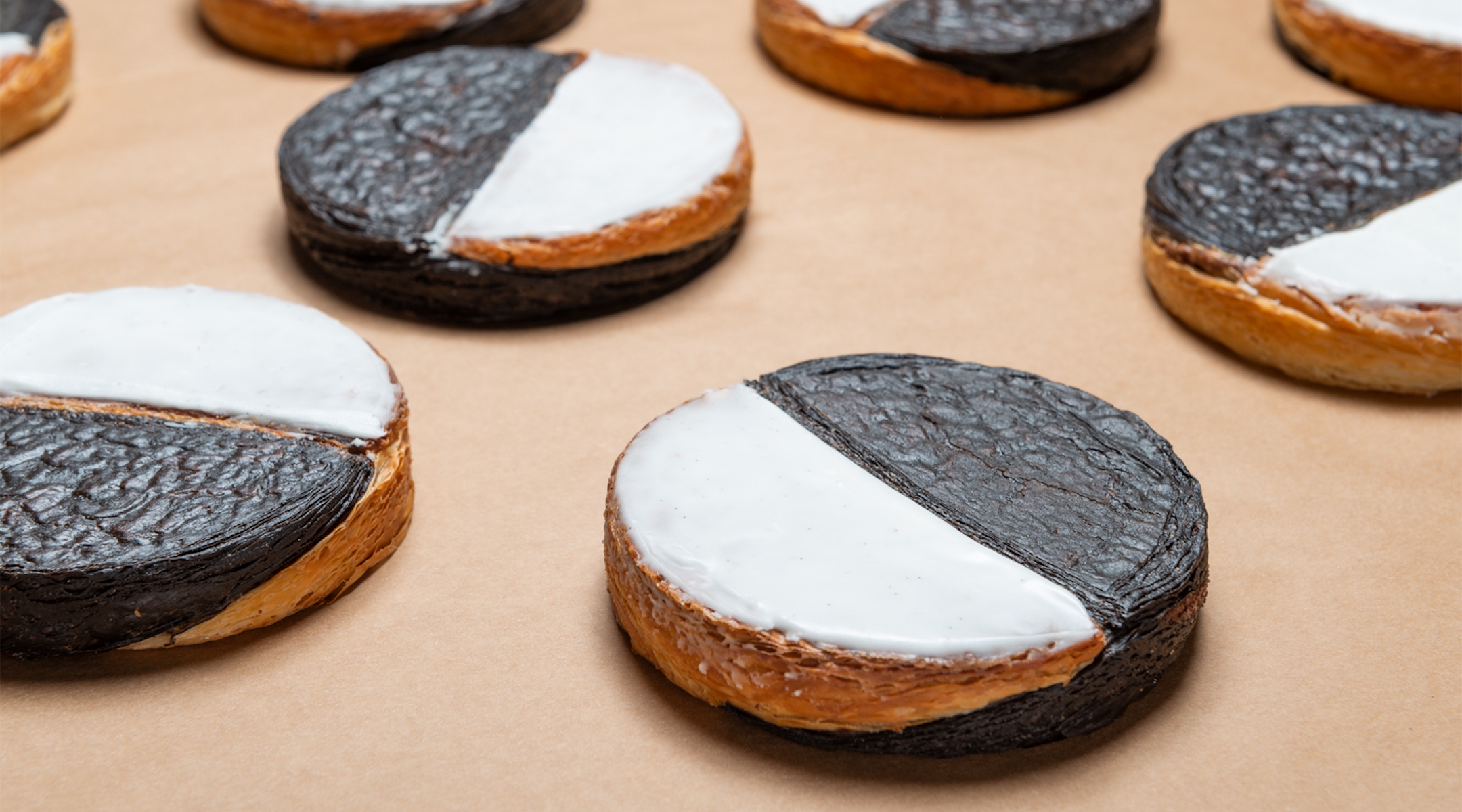 Breads Bakery started baking black and whites with their signature laminated dough when they opened their Upper East Side location last year. “I operate under the simple thesis that when you give people something great they’ll appreciate it regardless of what their expectation may have been.” Peleg said. (Ashley Solter)

At some bakeries, innovation starts in the dough. Last holiday season, Breads Bakery rolled out black and whites made with a laminated, croissant-like base instead of the classic doughy, cakey consistency .

“The first time I took a bite of it, it became very clear to me that we’ve elevated this cookie to a new level and given it the treatment that it deserves,” Breads owner Gadi Peleg said. “I think we have done enough to wink at the nostalgic nature of the cookie — there’s enough there to sort of connect you to the memories that you may have associated with a black and white cookie. But it’s just different enough to bring it into a more modern New York, the New York of today.”

At Kossar’s Bagels & Bialys — which now has three locations across the city and one more on the way — customers will find traditional black and whites sitting alongside all-chocolate or all-vanilla frosted versions, as well as multi-color and M&M-topped versions.

Kossar’s will frost the cookies with green for St. Patrick’s Day or red for Valentine’s Day, but the reboot is only skin deep. According to Bain, the “black and white refers to the chocolate and vanilla flavors of the frosting, and not the color.”

For Brian Zaro, too, the flavor and color innovations are all about customer satisfaction, and this year the new black and white varieties are also available at the Zaro’s outpost at the Bryant Park Winter Village. “It’s new for us,” Zaro said. “But so far so good.”