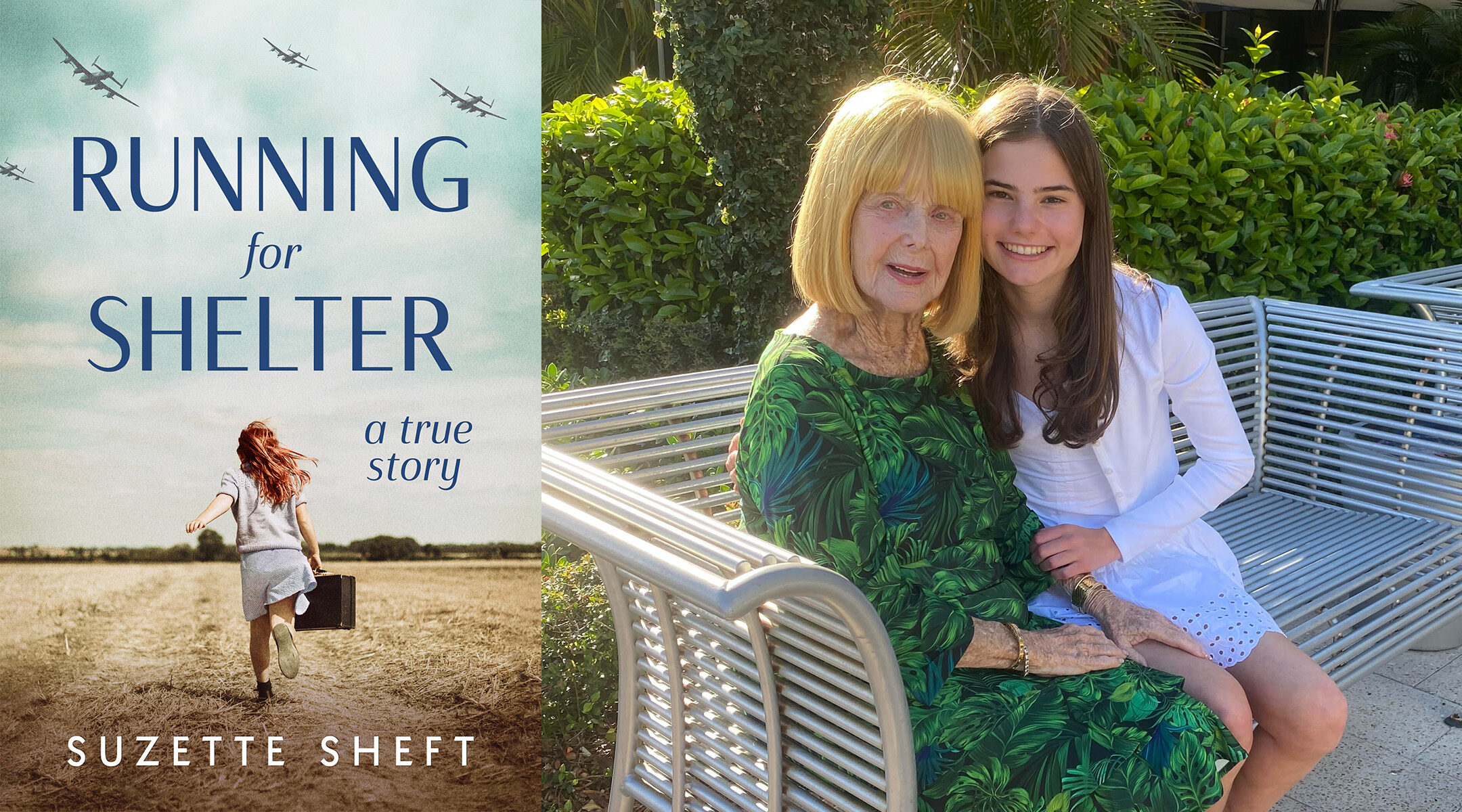 Suzette Sheft and her grandmother, Monique Sheft. Earlier this month, Sheft released a novel about her grandmother's story escaping from Austria to France during the Holocaust. (Courtesy)
Advertisement

(New York Jewish Week) — In May of 1937, 7-year-old Inge Eisinger lived in a luxurious Vienna apartment with a pantry stocked with favorite foods and a staff to keep her company. Though she had a strained relationship with her mother and an absent father, Inge, who was mostly raised by her maternal grandmother Anna, was living a charmed life.

This is the scene that opens “Running for Shelter,” a young adult novel about the Holocaust written by a young adult herself: 16-year-old Suzette Sheft, who is a junior at the Horace Mann School in the Bronx. In the novel, Sheft retells her grandmother’s story of surviving the Holocaust.

Published by Amsterdam Publishers, which specializes in Holocaust memoirs, the book is a delicate and powerful reminder of the importance of recording one’s family history. It’s a lesson Sheft learned too early in life: Her father, Peter, died of pancreatic cancer when Sheft was just 13 and she soon realized she was forgetting all the stories he told her about his childhood.

“I fantasized about rewinding time, so I could go back and record my favorite stories about his childhood,” Sheft writes in an author’s note. “I wished I had taken the time to write these stories down when I had the chance, because his death allowed me to understand the vitality of preserving the stories of our loved ones before it is too late.”

In memory of her father, Sheft recorded the story of his mother, her grandmother Monique Sheft, who was once the Viennese school girl Inge Eisinger.

In pre-war Austria, Eisinger had been living a completely assimilated life — so much so that her parents never even told her that she was Jewish. Following the Nazi takeover of Austria, her mother managed to whisk the two of them away to Switzerland, then Paris, but soon abandoned her. After a twisting and tragic story, Eisinger eventually reunited with her grandmother and moved to a village in Central France to wait out the war, changing her name to the more French “Monique.”

Sheft’s novel ends in 1946, when the two are on the boat to New York after the war and Eisinger’s grandmother reveals to her that she and her family are actually Jewish.

In spite of this — or perhaps because of it — Sheft, who lives in Manhattan with her mom, her twin brother and two dogs, is very committed to her Jewish identity. “Although my grandmother never really practiced Judaism, my dad was very involved in the Jewish world,” she said. “He was very passionate about Jewish causes and just Judaism, in general. So I felt very connected to the Jewish world because of him.”

The New York Jewish Week talked with Sheft about what the book means to her, why its subject matter is important and what she learned in the process of putting it together. (At the time of his death, Peter Sheft was a member of the board of directors of 70 Faces Media, the New York Jewish Week’s parent organization.)

New York Jewish Week: What was the process of writing the book; how did the idea begin and how did you collect your grandmother’s story?

Suzette Sheft: I had heard a lot of my grandmother’s stories from my dad. I always had an interest in the Holocaust — I would go to Holocaust museums in every city I visited, and I almost exclusively read books about World War II and the Holocaust growing up. So I kind of knew in the back of my head that I wanted to do something like this, but [my father’s death] sparked and ignited the necessity of doing it as soon as possible.

As for the process, a few summers ago I spent a week with my grandmother, interviewing her every day about her escape from Austria to France. At first she shared physical elements of her life, like her apartment and her family dynamics and her school life, but then she began to talk to me about the time leading up to the war — the years before the Germans invaded Austria. As she spoke, I recorded everything she said in bullet point form and I would periodically stop and ask for more detail. The next day, at the beginning of the conversation, I would recap what we had talked about, and then allow her to elaborate or clarify the story.

Every event that happens is true, and everything actually happened to her, but there are some small details that I embellished. For me, it was really helpful because, while I love creativity and writing, I sometimes struggle to pick an idea. So the fact that she had all these little stories, and I could expand from those, was something I loved while writing this. I had to use fiction when describing the atmosphere of certain places and also to write the dialogue because I can’t know exactly what they said or how they said it.

Do you have a favorite story your grandma told you that you made sure to get in the book?

Inge goes to a boarding school [in France] with her host family and there the children play a game where they pick someone to be the “torturer,” who is usually whoever they think the ugliest person is. My grandma had red hair and green eyes, and I guess she wasn’t the traditional standard of beauty. They picked her to be the torturer and she would have to pull people’s hair and scratch them. There would also be a queen, who was usually the prettiest girl with blond hair and blue eyes, and she would be protected. I thought it was interesting because to me it was the children’s way of understanding what was going on in the world around them. It’s a bit complicated, but when she told me this story I was completely shocked. It was really fascinating.

For people your age, why do you think Holocaust education is still relevant and important?

Some people my age don’t know anything about the Holocaust. I recently came across a statistic that talked about how little Gen Z knew about the Holocaust. There’s also been a spike in antisemitism and a decrease in awareness of history. For example, with Kanye West, who has a lot of followers, saying antisemitic remarks, a lot of people are going to just go along with what he says. There’s also just been a lot of hate crimes towards Jewish people, especially during COVID.

Lastly, the number of living Holocaust survivors is diminishing by the day. Gen Z is the last generation probably that is ever going to have the ability and the opportunity to speak with Holocaust survivors before they’re all gone. It’s important that we share this book now and then we educate people now before it’s too late.