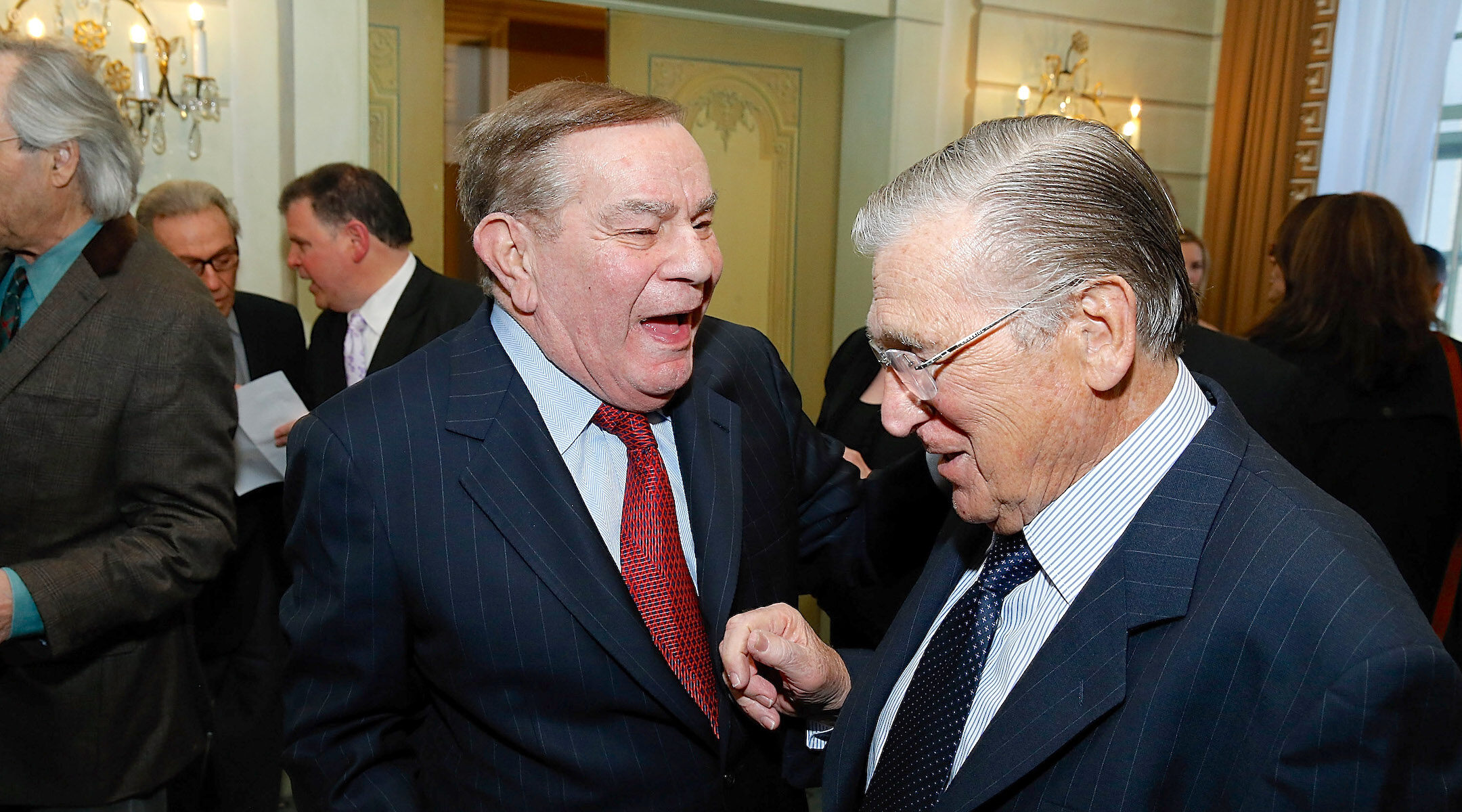 For years he served as dean of the Friars Club, the New York city clubhouse of popular entertainment, where faded stars and up-and-comers gathered to puff on cigars, trade crude jokes and roast one another with, well, even cruder jokes.

In 1991, long after the Borscht Belt itself had faded as a popular tourist spot, he created “Catskills on Broadway,” a revue starring him and fellow tummlers Dick Capri, Marilyn Michaels and Mal Z. Lawrence. It ran for 453 performances.

“‘Catskills on Broadway,” the New York Times said in its upbeat review, “manages to reproduce the ambiance of the Catskills. The basic difference is that on Broadway there is not a nosh in sight. But there is a groaning board of jokes about eaters and stuffers.”

Born Fred Kirschenbaum on May 28, 1937 in Newark, New Jersey, and raised in Jamaica, Queens, Roman started emceeing at age 15 at the the Crystal Spring Hotel in the Catskills, which was owned by his uncle and grandfather. He soon was performing at hotels and resorts in the region for the largely Jewish crowd, and later played the “big rooms” in Las Vegas and Atlantic City. A highlight of his career was opening for Frank Sinatra.

Although never a crossover star like Alan King, Jackie Mason or Joan Rivers — three other Jewish comics with roots in the Catskills — he nonetheless stayed busy, most recently with a recurring role in the Amazon series “Red Oaks.”

But the comic’s comic was also credited with reviving the Friars Club, which had lost much of its luster when he first arrived in 1970. As its elected dean (“Every two years, they keep re-electing me,” Roman told a reporter in 2005. “No one seems to run against me. Maybe no one wants it.”), he experimented by admitting women and holding showcases for young comics. The changes worked, and younger comics like Susie Essman, Jeff Ross and Paul Reiser became regulars.

The younger comedians have “added a wonderful new vibrancy to the club,” Roman told the New York Jewish Week in 2000. “This is going to continue to be a wonderfully funny Friars Club.”

Reiser was one of the comedians remembering Roman on Twitter this week. “A great loss to the world of comedy,” he wrote. “He was such a huge supporter & mentor when I was starting out. A GREAT comic, the ultimate pro with the biggest heart. I will miss our phone calls and his big, beauty [sic] laugh.”

Ross, who earned the title of “Roastmaster General” at the Friars Club, remembered Roman with a quip about his booming voice: “They call him Freddie Roman because you can hear him in Italy.”

My very first Friars roast joke… “They call him Freddie Roman because you can hear him in Italy”. ❤️❤️❤️

After its Broadway run, “Catskills on Broadway” toured around the country, keeping the Borscht Belt flame burning. In his shtick, Roman commented about everything from his childhood in Queens to his “retirement” in Florida.

“I took a cholesterol test,” Roman quipped. “My number came back 911.”

For years his home base was a condo in Fort Lee, New Jersey, from which he would “commute” to the Friars Club on E. 55th St.

While Roman never got his own sitcom or became a household name, he appeared to have no regrets.

“I’ve met everyone and been a lot of places,” he told the New York Times. “Alan [his son, a TV producer] put me in one of his sitcoms once, playing myself. That’s the greatest honor. And his daughter, who is 4, laughs at my jokes. Who can beat that?”