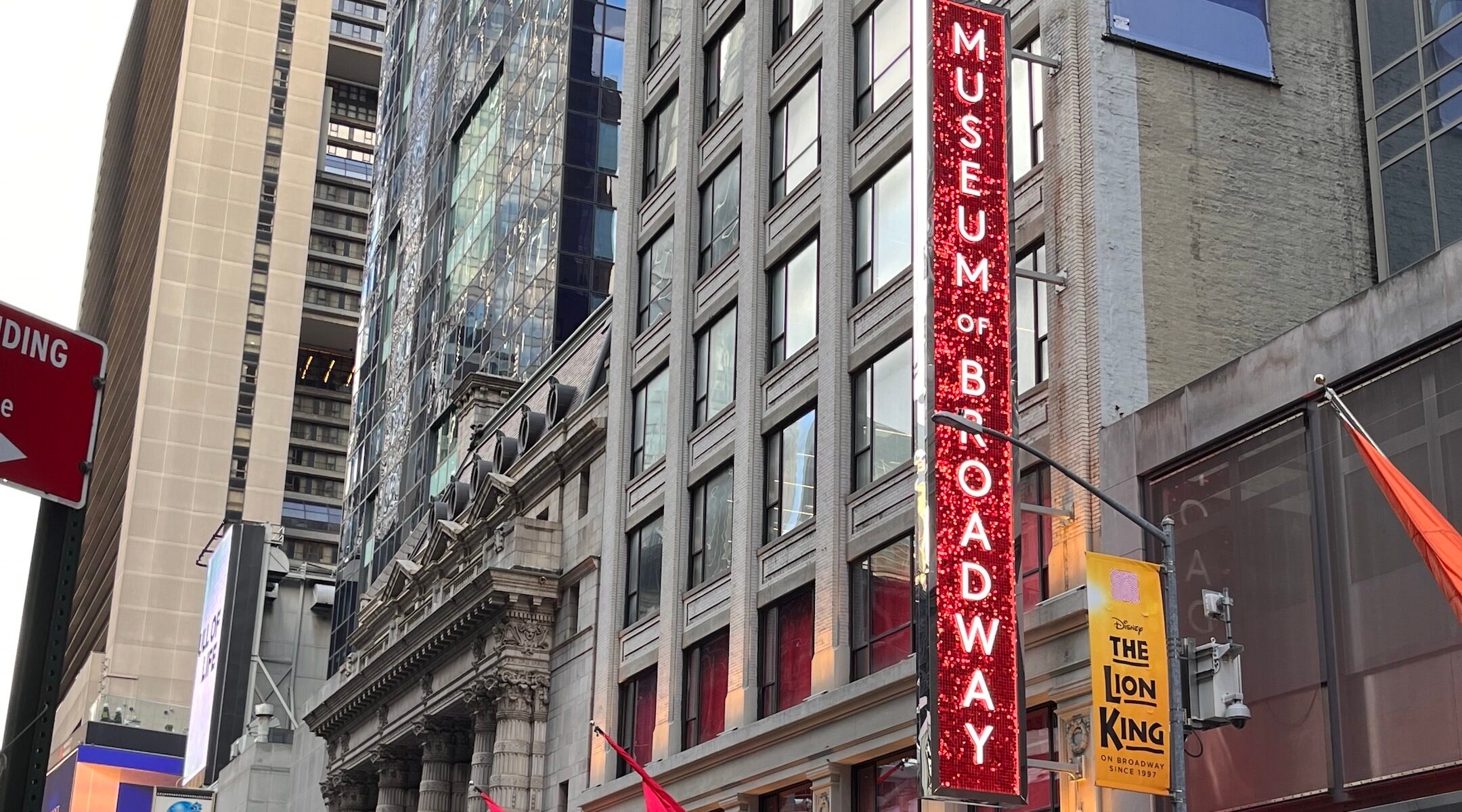 The Museum of Broadway opened last month in the heart of Manhattan's Theater District. (All photos NYJW)
Advertisement

(New York Jewish Week) — There’s a reliably funny Twitter account called @JewWhoHasItAll, which imagines a universe where nearly everyone is Jewish and those who aren’t are the outliers.

That’s the sensation I got on a visit to the Museum of Broadway, which opened last month. A three-story tribute to the Theater District located in its very heart, it is organized around a series of rooms dedicated to landmark musicals and plays, and the majority bear the stamp of Jewish creators: Jerome Kern and Oscar Hammerstein’s “Showboat,” Richard Rodgers and Hammerstein’s “Oklahoma!”, Leonard Bernstein’s “West Side Story,” Stephen Sondheim’s “Company,” Tony Kushner’s “Angels in America.”

Other projects dedicated to the history of Broadway aren’t shy about noting the over-representation of Jews in the business. “Broadway Musicals: A Jewish Legacy,” a documentary that seems to run on a nearly endless loop on my local PBS station, notes that “over the [first] 50-year period of its development, the songs of the Broadway musical were created almost exclusively by Jewish Americans.”

If the Museum of Broadway acknowledges this, I didn’t notice. Some might take this as an omission or a snub, the way critics objected when a new museum about the history of Hollywood initially overlooked the essential Jewish contribution to the movie business. But in this case, the Jewishness of Broadway is taken as a given. You’d have to be culturally illiterate not to notice how many of the most celebrated creators are Jewish: In addition to the musical tributes, there are wall placards singling out the contributions of Sondheim and the director Harold Prince, a corner devoted to “Fiddler on the Roof” and a gallery celebrating Joe Papp (born Joseph Papirofsky) and his Public Theater, that reliable pipeline of breakthrough Broadway shows.

(There were, however, frequent mentions of the specifically African-American contributions to Broadway. That seemed a deliberate attempt to counter perceptions that Broadway is indeed the “Great White Way.”)

The museum, whose opening was delayed by the pandemic, is a collaboration with Playbill, Broadway Cares/Equity Fights AIDS (which is supported by a portion of the stiff $39 admission charge), the Al Hirschfeld Foundation, Concord Theatricals and Goodspeed Musicals. Its approach is chronological, with a timeline that pulls visitors from room to room, from vaudeville, through Broadway’s “Golden Age” and up to the present. Original costumes and props are on display in Instagram-ready settings that resemble the original sets for various shows.

Among the paraphernalia and stagecraft are a number of Jewish highlights. Here are seven: 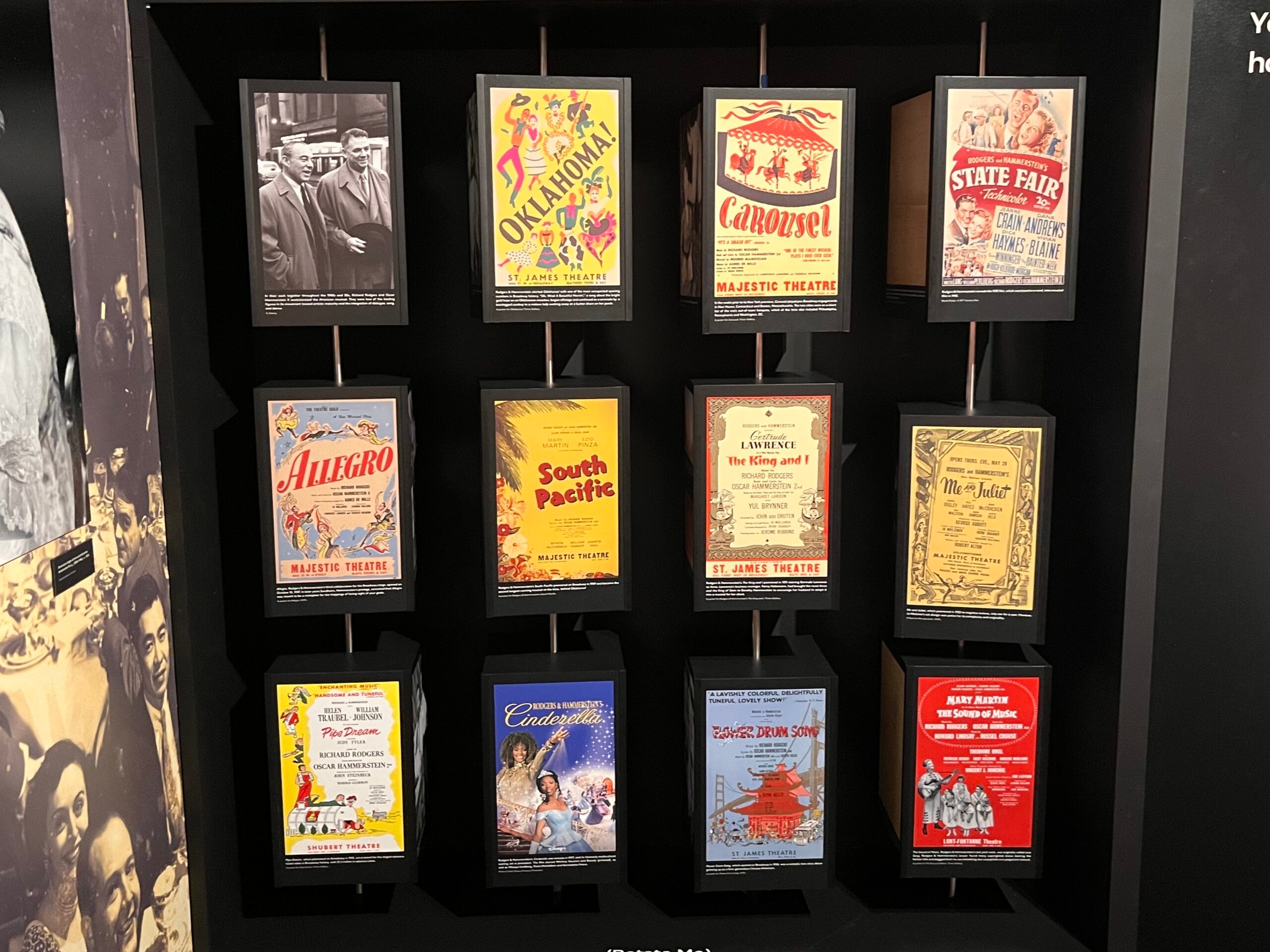 A sample of Rodgers and Hammerstein musicals, on display at the Museum of Broadway. (NYJW)

Just past the cornstalks celebrating the ground-breaking 1943 musical “Oklahoma!” is a wall display showcasing the duo’s most important collaborations, including “Carousel,” “South Pacific,” “The King and I,” “Flower Drum Song” and “The Sound of Music.” Rodgers, working with Hammerstein and before him Lorenz Hart, wrote more than 900 songs and 41 Broadway musicals. Combine that with Hammerstein’s work with Kern, and it is hard to imagine two more important figures in the history of musical comedy. 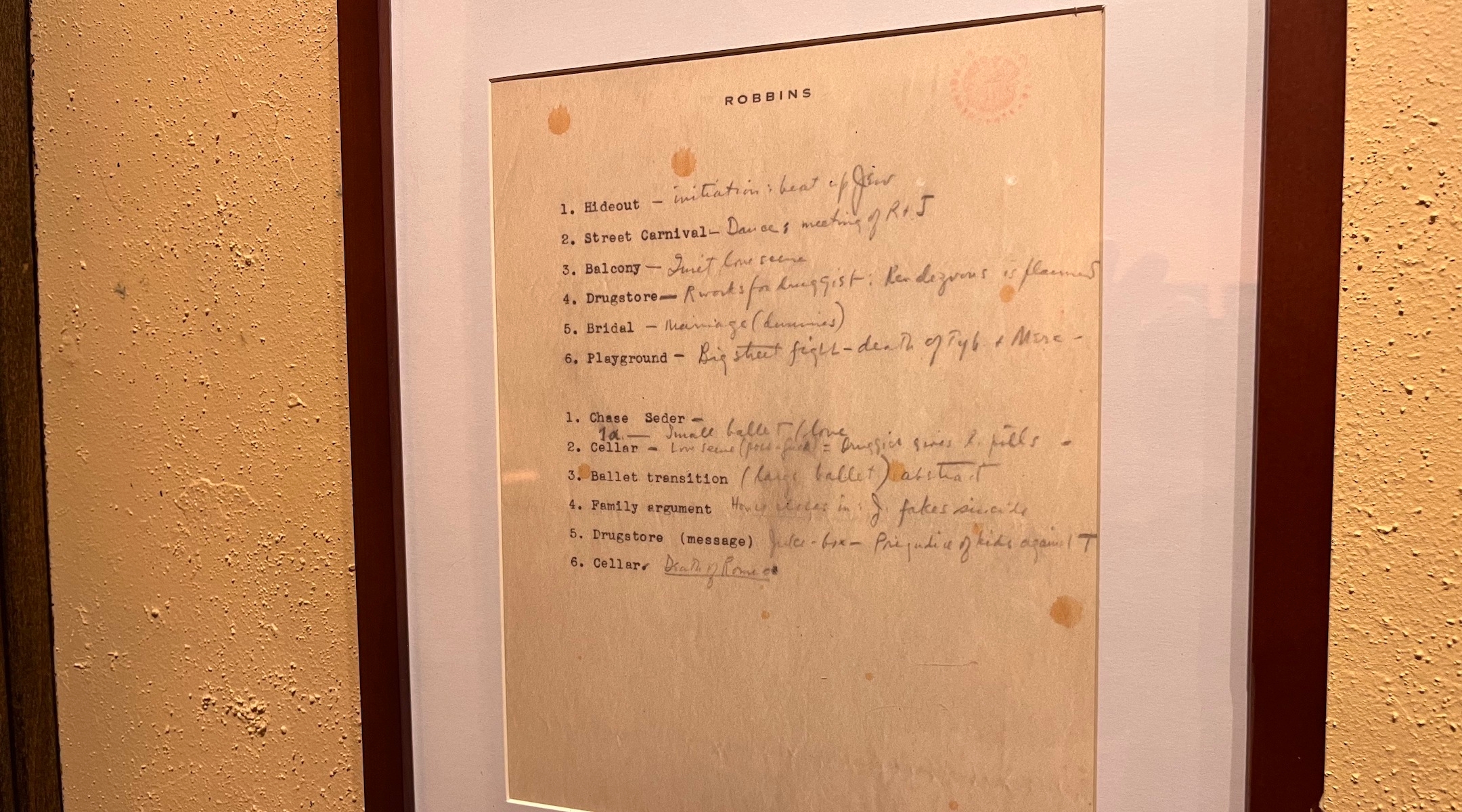 Choreographer Jerome Robbins suggested a “seder” scene in an early conception of what became “West Side Story.” (NYJW)

Look closely at this list of proposed scenes for a musical based on “Romeo and Juliet” and you’ll see the word “seder.” Robbins (born Jerome Rabinowitz) originally proposed that the show focus on a star-crossed love story between a Jewish girl and an Irish boy, but the choreographer and his fellow Jewish collaborators — composer Leonard Bernstein, lyricist Stephen Sondheim and playwright Arthur Laurents — soon felt the interfaith idea had already been exhausted in plays like “Abie’s Irish Rose.” When the show premiered in 1957, the gangs were Puerto Rican and a medley of ethnic whites. 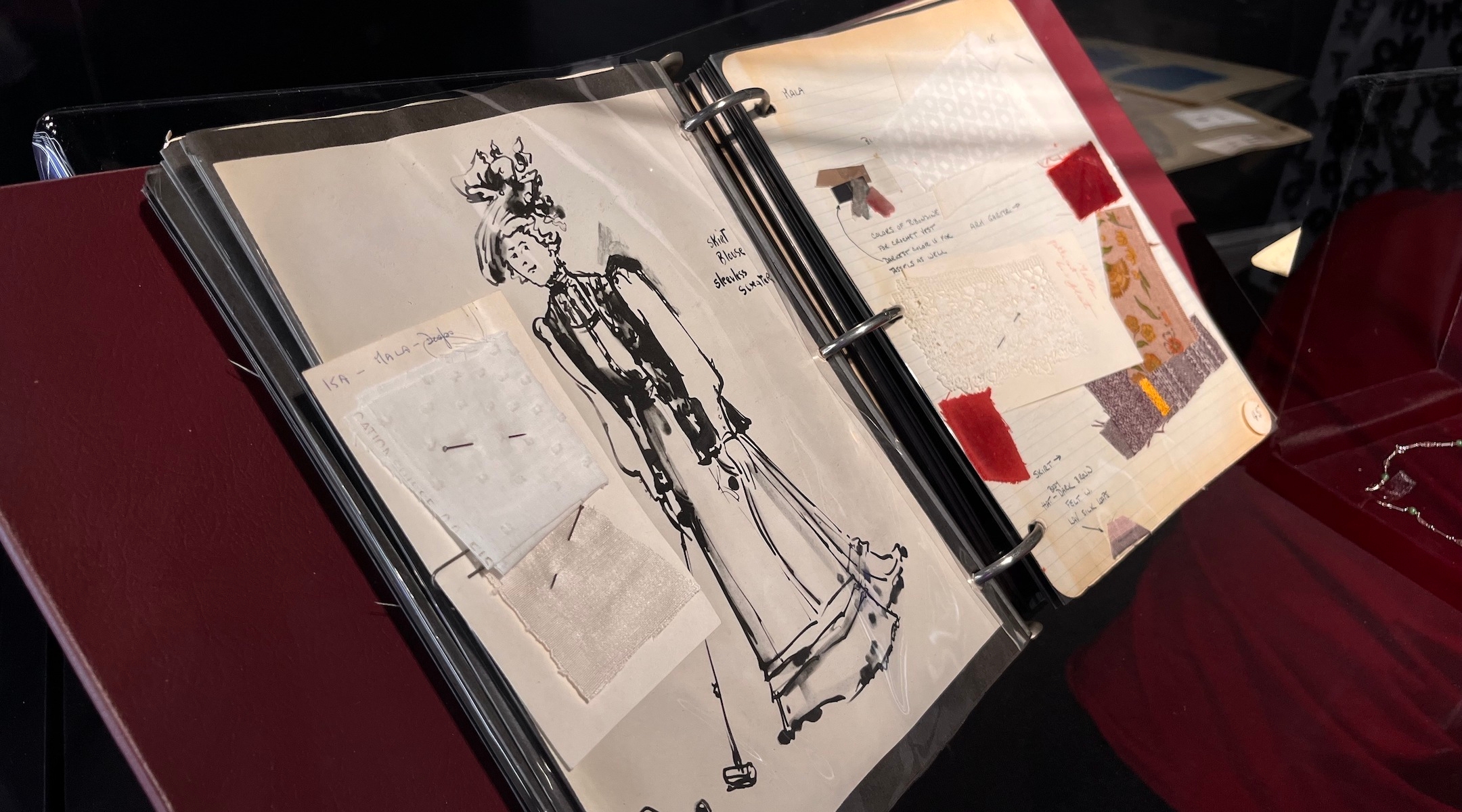 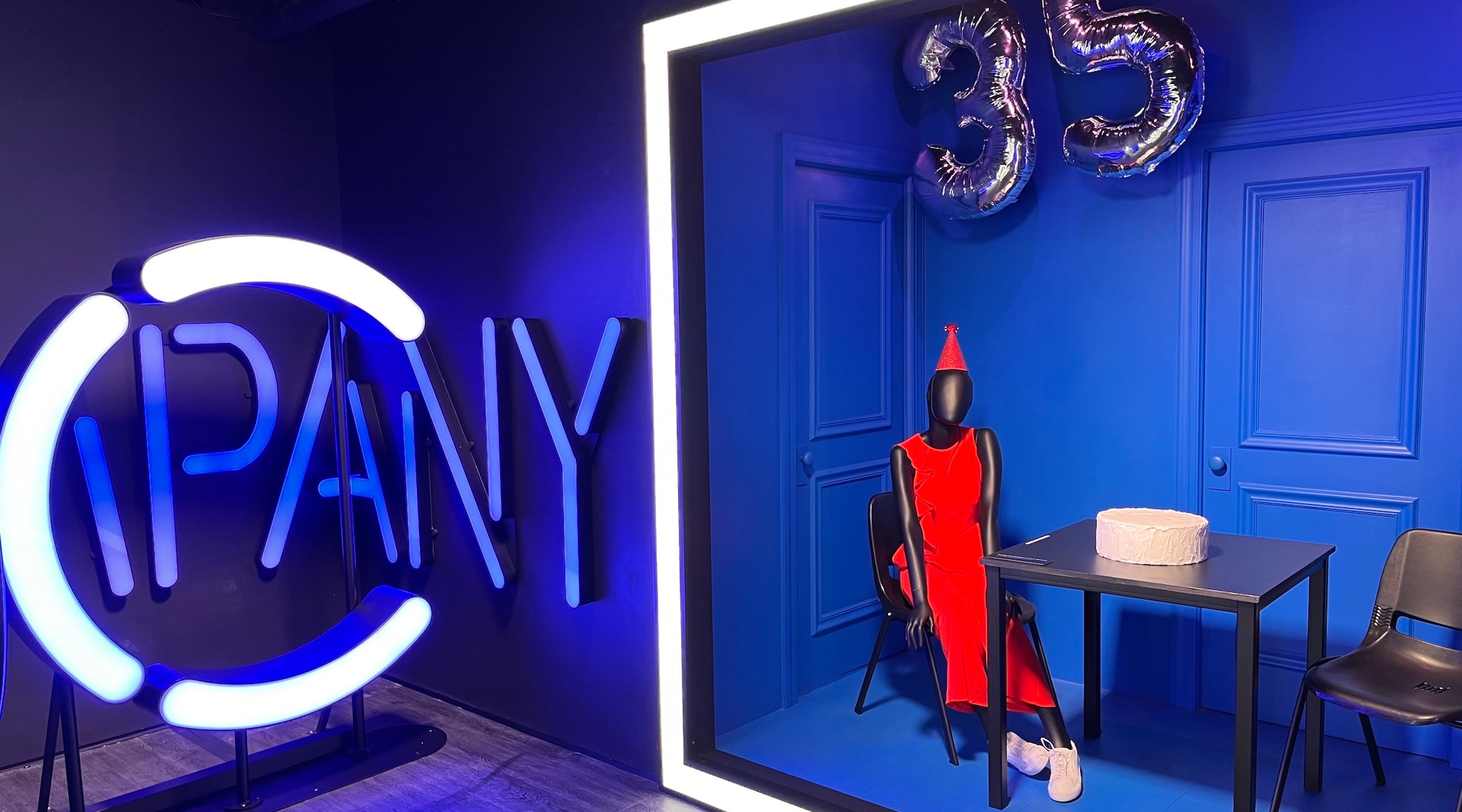 A display at the Museum of Broadway celebrates a recent revival of “Company.” (NYJW)

Sondheim and Prince emerge as the museum’s lodestars. “Their intense and fruitful partnership and their creative trailblazing in [the 1970s] resulted in an extraordinary artistic innovation and a slew of provocative new works,” a wall card proclaims. “Company” (1970) was a largely plotless exploration of urban anomie. The museum calls it a “frank, even painful look at modern life,” perfectly attuned to the upper-middle class theatergoers who, it says, are the “backbone” of the Broadway audience. It’s the show people love or hate if they love or hate Sondheim. The “Company” exhibit includes photos of the original cast and spare set, and a backdrop that draws on the recent gender-bending revival. 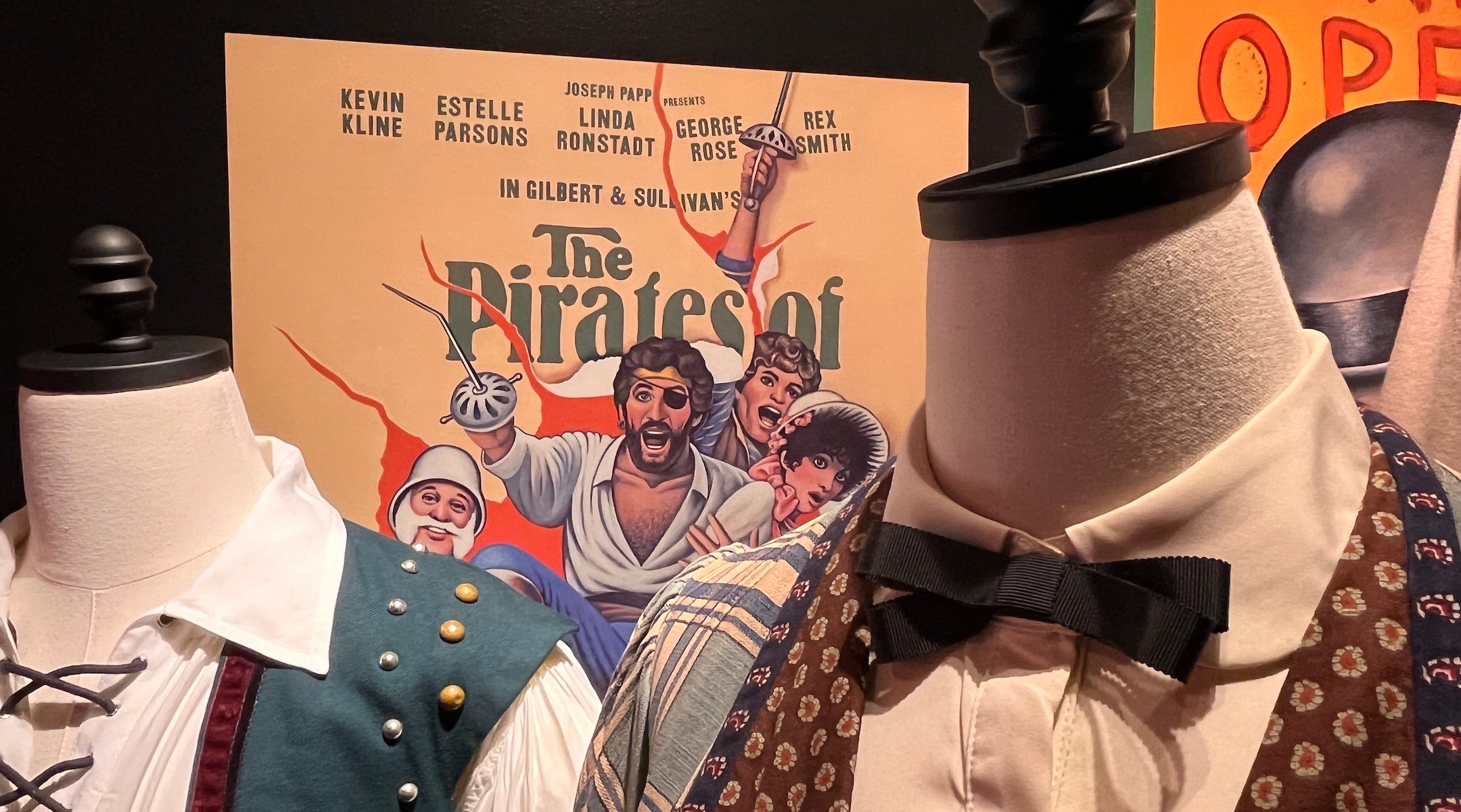 Costumes from productions that originated at Joseph Papp’s Public Theater on display at the Museum of Broadway. (NYJW)

Joe Papp flipped the script on how shows made it to Broadway: His Public Theater produced edgy off-Broadway plays that drew audiences downtown, and then successfully transferred that same buzz to the “Big Stem.” Papp, a son of Yiddish-speaking parents who grew up in a Brooklyn slum, founded the New York Shakespeare Festival. A section of the museum includes costumes and posters from important productions that originated at The Public — including wildly popular revivals of “The Pirates of Penzance” and “The Threepenny Opera” — and a dress Meryl Streep wore in her Broadway debut, in “Trelawny of the ‘Wells.’” Two other musicals developed at The Public — “Hair” and “A Chorus Line” — get their own tribute rooms. 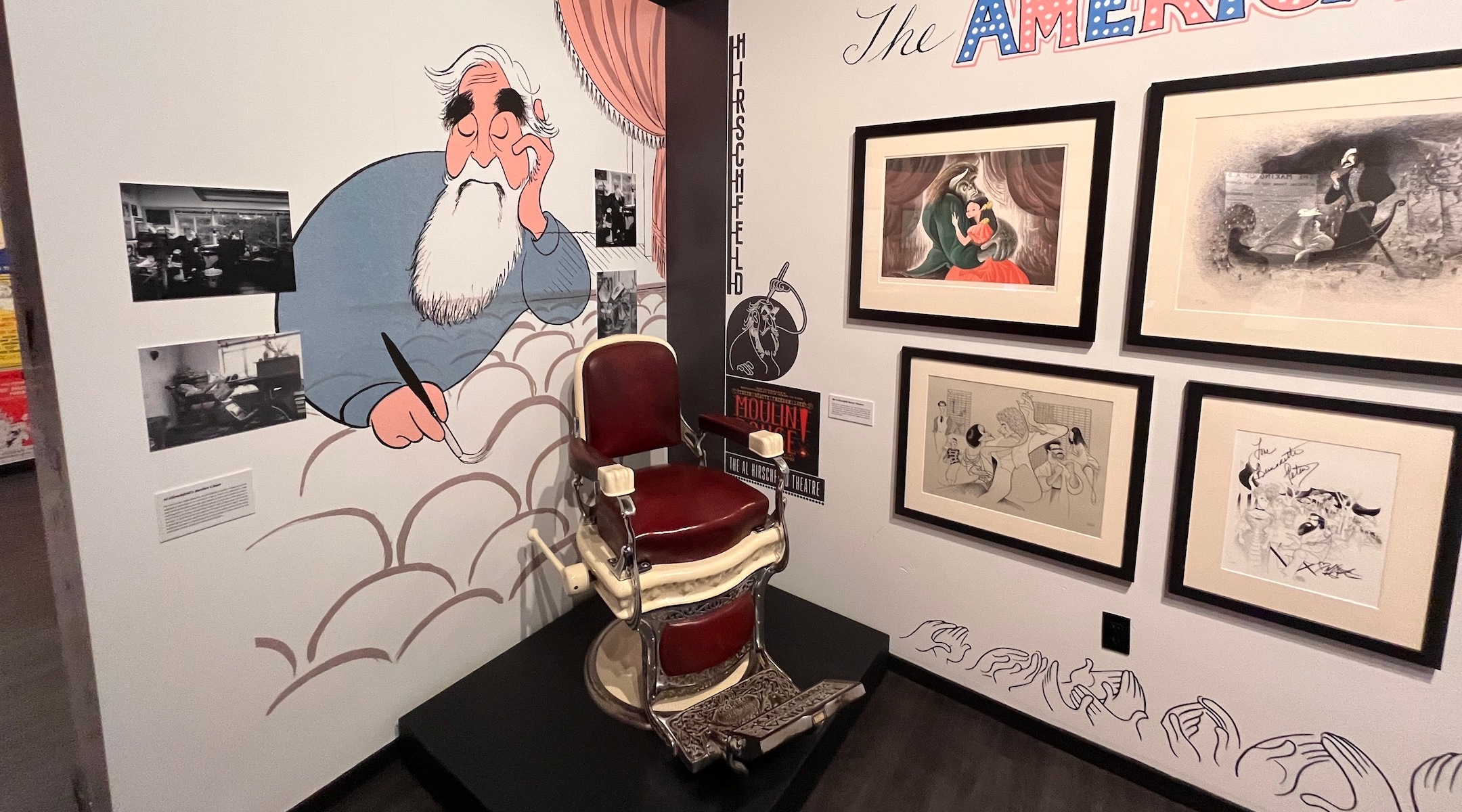 A room at the Museum of Broadway includes works by the famed caricaturist Al Hirschfeld. (NYJW)

The museum has an entire gallery dedicated to the work of artist Al Hirschfeld and his caricatures of Broadway stars and productions from 1923-2001. His pen-and-ink drawings were a visual shorthand for “Broadway,” and it would sometimes seem that the stars he drew would come to resemble his drawings, not the other way around. The museum includes his wonderfully kooky Barbra Streisand in “Funny Girl” and a bearish, brooding Zero Mostel as Tevye. On display is a barber chair similar to the one he used in his studio (the original had fallen apart by the 1990s). 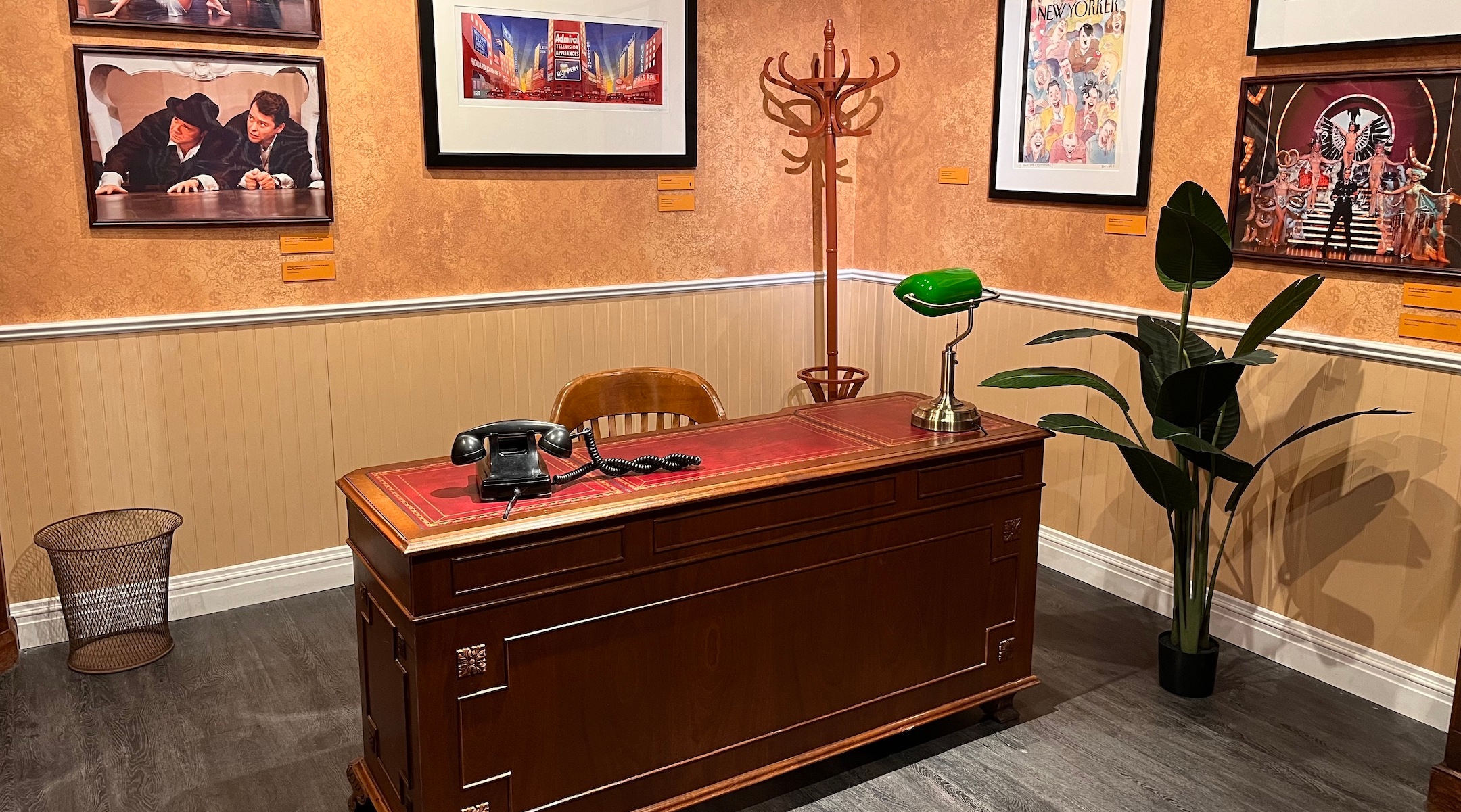 An exhibit space at the Museum of Broadway evokes the scenery from the Mel Brooks musical “The Producers.” (NYJW)

You can sit behind a desk and pretend you are Broadway producer Max Bialystock, who was played by Nathan Lane in the phenomenally successful 2001 musical adaptation of Mel Brooks’ 1967 film about the worst musical ever staged for Broadway. The display is a reminder of the impact of the show, and not only on ticket prices: It proved the viability of adapting movies for Broadway, and earned a record-setting 12 Tony Awards. The museum calls the musical, with its tap-dancing Nazis and sweet and conniving Jewish protagonists, a “glittering homage to Broadway’s past” — a past that is unmistakably Jewish.