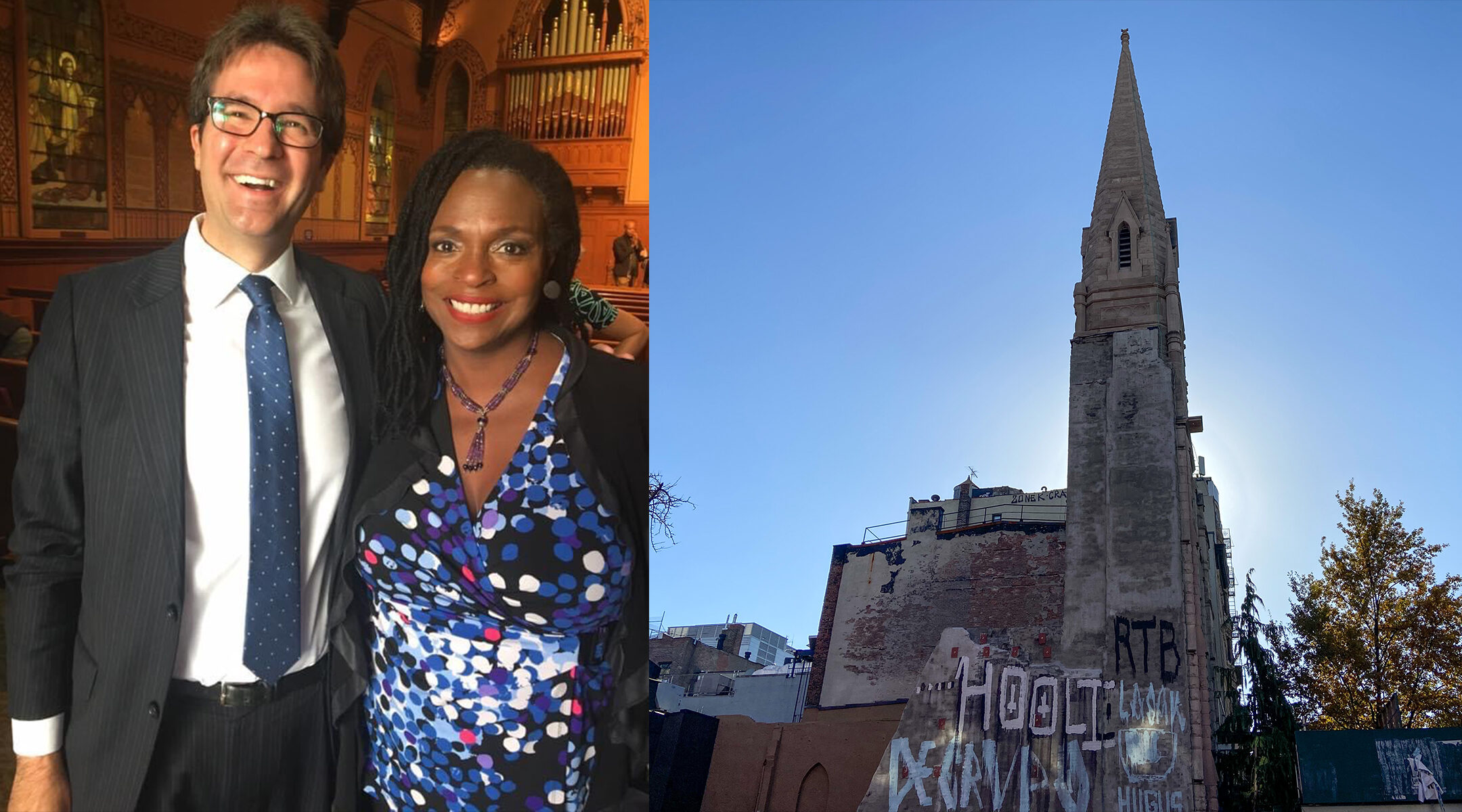 Rabbi Josh Stanton of East End Temple has been hosting the Reverend Dr. Jacqui Lewis and Middle Collegiate Church for almost two years at his synagogue after a fire destroyed their church. (Courtesy/Jacob Henry)
Advertisement

(New York Jewish Week) — After a six-alarm fire left a historic Manhattan church homeless, a synagogue stepped in to provide a space for church-goers to continue worshiping while they figure out a plan for a new home.

Two years later, the bond between the two congregations has only grown, with a new twist: East End Temple on E. 17th St. is supporting Middle Collegiate Church in its clash with the Landmarks Preservation Commission over plans to rebuild their damaged building in the East Village.

Dec. 5 marked the two-year anniversary of the fire that brought her church to the Reform congregation, or “out of a place in the wilderness,” as the Reverend Dr. Jacqui Lewis told the New York Jewish Week. Lewis said that East End’s Rabbi Josh Stanton was one of the first people who reached out to her after the fire, which started next door and destroyed the 128-year-old sanctuary.

“We just made a covenant to move in there,” Lewis said. “Josh was offering me a tabernacle. This big-hearted rabbi opens the door to a church, in a time of rising antisemitism, that’s just bold, fierce love at work.”

Stanton told the New York Jewish Week that the relationship between the two faith communities “predates the fire itself.”

“The reverend has been a friend and a mentor for years,” Stanton said. “When her community’s building went up in flames, I reached out to her and just said, ‘anything you need, just know that I’m here, know that our community is here.’”

Middle Collegiate Church started using the temple’s space on Easter Sunday that spring. The synagogue’s president Brian Lifsec said he was there on the first day.

“It felt like a tent in the desert for these congregants,” Lifsec said.

It’s not all bleak out there.

I went to church last Sunday, where East End Temple, a Jewish synagogue in the East Village, has been hosting @middlechurch for almost two years after a fire destroyed their historic building. pic.twitter.com/0FjtlXr7TA

Stanton said that East End Temple covers “upwards of 95% of the cost” for the church to rent the space.

“That’s because of the generosity of our donors,” Stanton said. “And because our community understands that walking the walk of Judaism means reaching out to people who might themselves not be Jewish.”

Lewis is the first woman and first African-American to serve as a senior minister for the Collegiate church system, which dates back to the Reformed Dutch Church congregations that formed in the New York area in the 1600s. She is comfortable leading church services in front of an ark, a menorah and Hebrew scriptures, but aches to get back into her own building.

How and whether she can do that depends in part on the Landmarks Preservation Commission, which is responsible for preserving New York City’s historically significant buildings. It seeks to protect the historic facade made of limestone that remains standing. The church, following an 18-month study by several architectural and engineering firms, says there is too much damage to the existing structure to integrate it into a new home.

“The walls themselves are historic,” Stanton said. “Despite the church’s best efforts, there is no way to keep them safely up. What is so sad and problematic is that from an architectural standpoint, there is nothing they can do.”

Lewis said that the church has spent over $4 million to secure the site, clean up debris, stabilize the facade with stainless steel and paint the bricks so they don’t deteriorate — and it is still not safe to rebuild.

“We did that because we wanted the facade,” Lewis said on Sunday after prayer, as she led some church members to the site of the burnt-down building. “We just can’t afford it. We’re wanting to build a building that is appropriate for this historic neighborhood but also has the capacity for 22nd-century ministry.” In a phone call last week, Lewis said that she doesn’t want this to feel like she’s in “a battle” with the preservation community.

“But some parts of the preservation community are pretty strident about us keeping up the wall,” Lewis said.

The church is waiting on a decision from the commission on Dec. 13, which will decide the fate of their building.

Anthony Donovan, a church member who has lived in Greenwich Village for 31 years, told the New York Jewish Week that “there are deep pockets of real estate that would really love this facade” as part of their own plans.

“Luxury housing would look fantastic behind this facade,” Donovan said. “And they have millions to keep that facade that we don’t have.”

Village Preservation, an activist group opposed to the demolition of the facade, said in an emailed press release that alternatives need to be studied.

“We are urging the Landmarks Preservation Commission not to grant such permission at this time, because we don’t believe there is sufficient documentation that alternatives to preserve the historic facade have been fully explored, nor that there is sufficient evidence at this time to justify the permanent and irreversible removal,” the organization said.

“The facade is on life support,” Lewis said. “We could pull the plug and come back to life. We could have a resurrection.  We could have a new life that is both historic and moves into the 22nd century, and that’s what we want to do.”

Assembly member Harvey Epstein, who is Jewish and represents the district, gave testimony supporting the church at a previous hearing with the Landmark Preservation Commission.

“While I understand Landmark’s concerns, I think more important than just what that physical piece is that the actual church and the people behind it get to come back,” Epstein told the New York Jewish Week over the phone.

He added that Rabbi Stanton is an example of someone “living Jewish values everyday” by allowing the church to worship at East End Temple.

Stanton said that if it is decided that the walls have to stay up, then the conversation will move into “the realm of heartbreaking decisions.”

“It is not clear if the walls have to stay up, that the church will have to rebuild at all, even if it raises significant funds to do so,” Stanton said. “If they move out of this area, there’s going to be a huge gaping void for hundreds of thousands of New Yorkers. It just wouldn’t be the same.”

The building has served the community since 1892. Before the fire, it served as a community hub for other programs, some run by other synagogues, that include soup kitchens and Alcoholics Anonymous meetings. 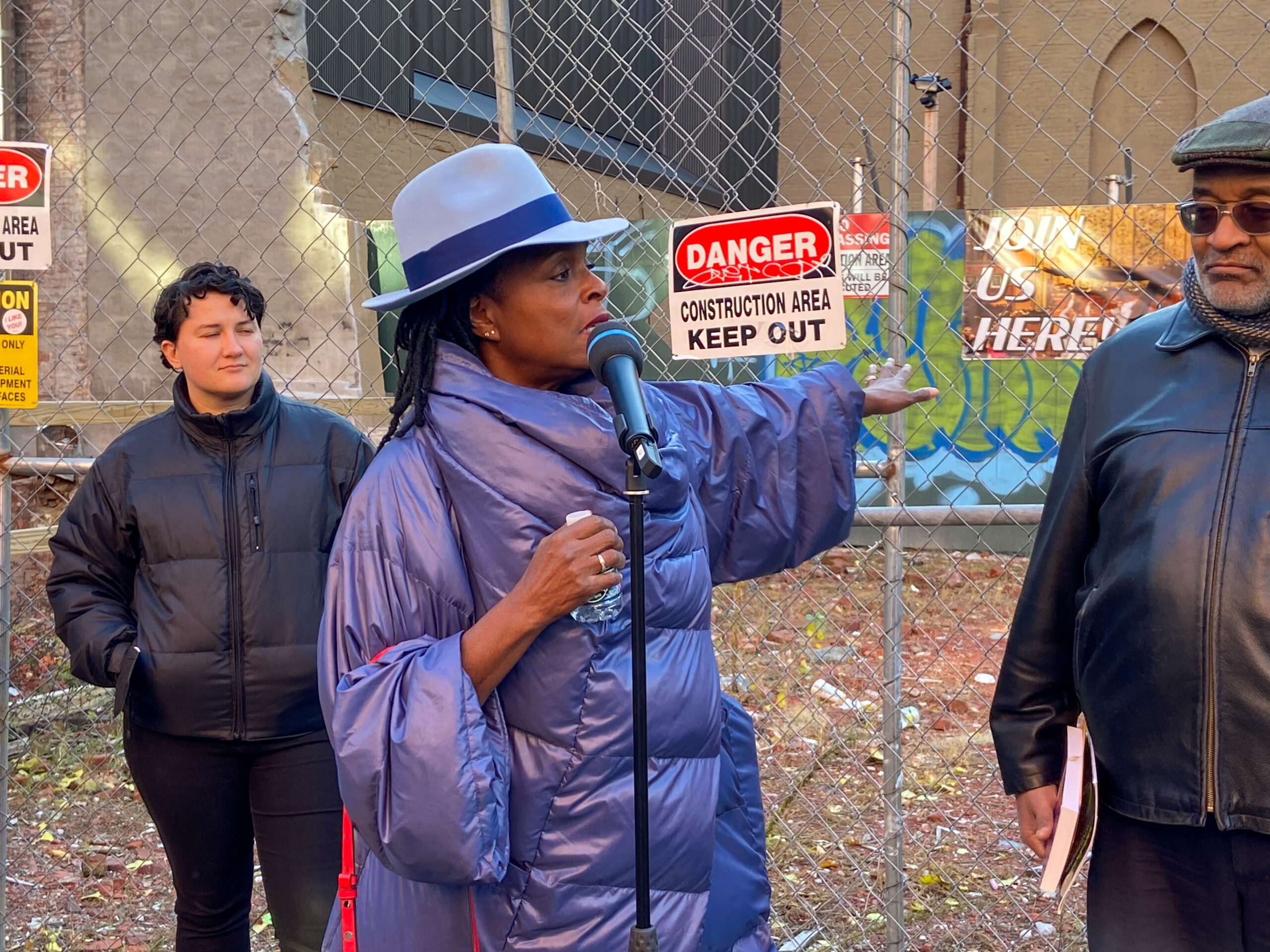 It has also played a role in supporting people during the AIDS crisis, helping people pay rent during Covid and more recently, supporting Ukraine in its war with Russia.

Together, the church and synagogue communities also hold a “food for families” program, where members help feed 1,500 families every Sunday.

Edna Benitez, a church-goer who has lived in the Village for 27 years, told the New York Jewish Week that when the fire broke out, the church was housing a Torah for another synagogue, The Shul of New York.

“They had an ancient Torah,” Benitez said. “Our fire destroyed the building, but the Torah stayed. It’s a huge symbol. We’re here two years later celebrating in a temple. We housed the Torah, this incredible, prized possession that meant so much to you, and now you’re housing us.”

Whatever happens with the Landmarks Commission, Lewis said that she expects her partnership with Stanton and East End Temple “to be lifelong.”

“We have so many things to do together,” Lewis said. “I know that we’ll be welcome there, and I also know that they know that we need a bigger space. In the meantime, they’ve been incredible hosts and they are offering us ongoing hospitality.”

Outside the church facade, Stanton spoke out how in a time of troubling antisemitism — fueled by celebrities like Kanye West and Kyrie Irving and propagated by groups like the Black Hebrew Israelite sect — the relationship between his synagogue and the church represents “real life.”

“While antisemitism is on the rise, so too is allyship,” Stanton said. “The Reverend Dr. Jacqui Lewis, who embodies allyship at its best, is one of the people who reaches out every single time that something awful happens to a Jewish community.”

Lewis, who can command a stage (or bimah), led a passionate sermon on Sunday, with the fire on the back of everyone’s mind.

“Could we do a little interior work as we go along this pilgrim’s journey so that we are not accidentally putting fuel on the fire that is raging and burning down the world?” she said.