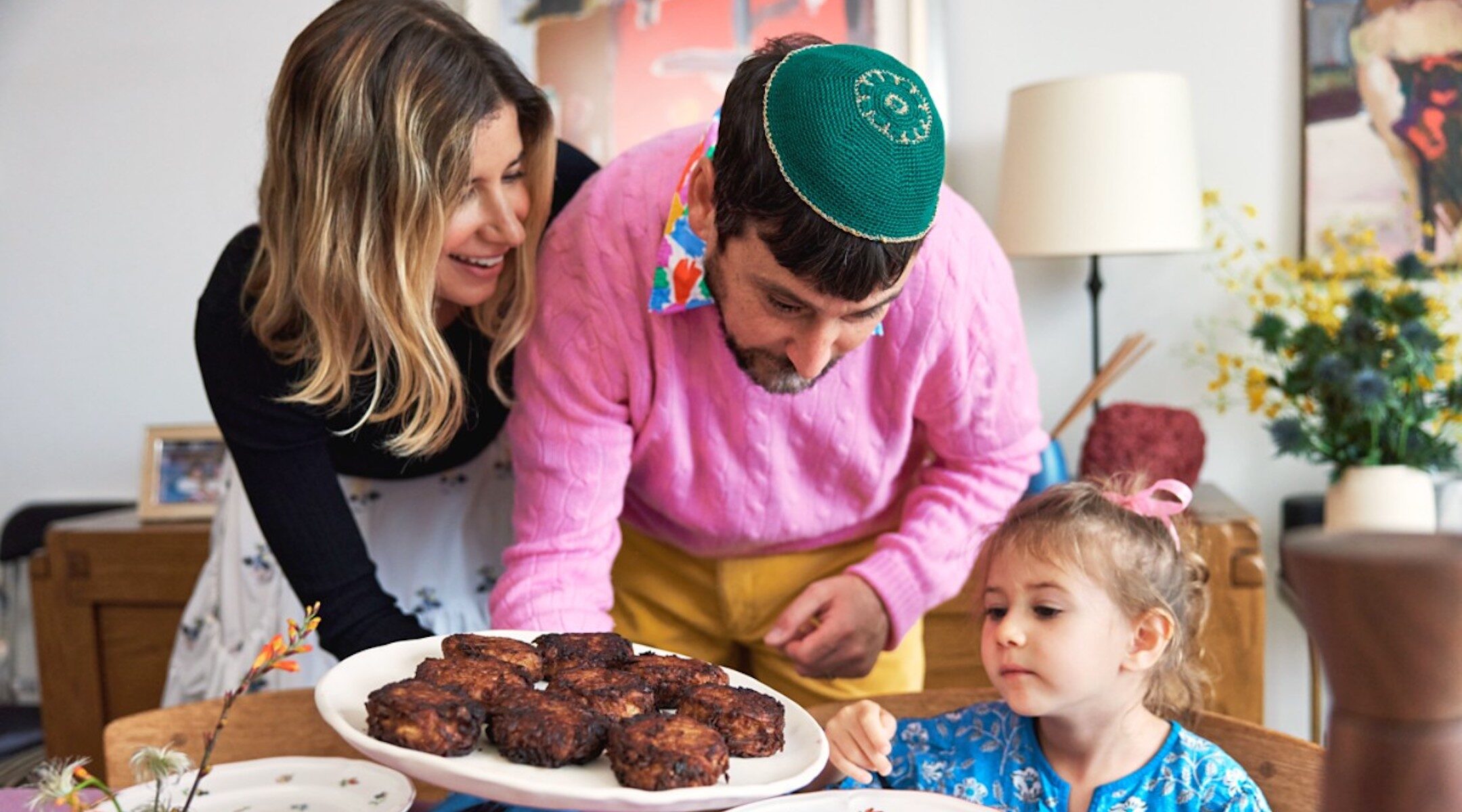 Sara Brown-Rubinstein, Mordechai Rubinstein and their daughter Isabella are the faces of Nordstrom's 'Make Merry' holiday campaign plastered around the city's subways. (Courtesy of Nordstrom)
Advertisement

(New York Jewish Week) — For photographer and Instagram blogger Mordechai Rubinstein, seeing his face plastered all over the subway this holiday season has been an unexpected delight.

Rubinstein is decidedly not a dermatologist (a la subway-famous Dr. Zizmor), nor is he hawking subscription meds or beauty products. Rather, Rubinstein is featured in Nordstrom’s prominent “Make Merry” holiday campaign, where he’s seen celebrating Hanukkah alongside his wife Sara Brown-Rubinstein and their 5-year-old daughter, Isabella.

The ads have been prominently displayed in subway and bus lines across the city. “We first saw it in the wild — we didn’t even know until people started sending us pictures,” said Rubinstein, who assumed the family photo shoot, which happened over the summer in their Greenpoint, Brooklyn home, would be used exclusively on social media. “It was a huge surprise, I don’t know how else to say it.”

The ads spotlight the family of three eating latkes and lighting the menorah together. Rubinstein — who’s known to his 127,000 Instagram followers as @mistermort and describes himself in his bio as “SHMUCK AT LARGE, GARMENTOLOGIST, ANTHROPOLOGIST, photographer, photojournalist and author” — wears a bright pink sweater over a floral shirt and mustard pants, completing the look with a green knit kippah. Meanwhile, Sara and Isabella keep it more simple, wearing a black sweater and white maxi skirt, and a blue and white dress, respectively. 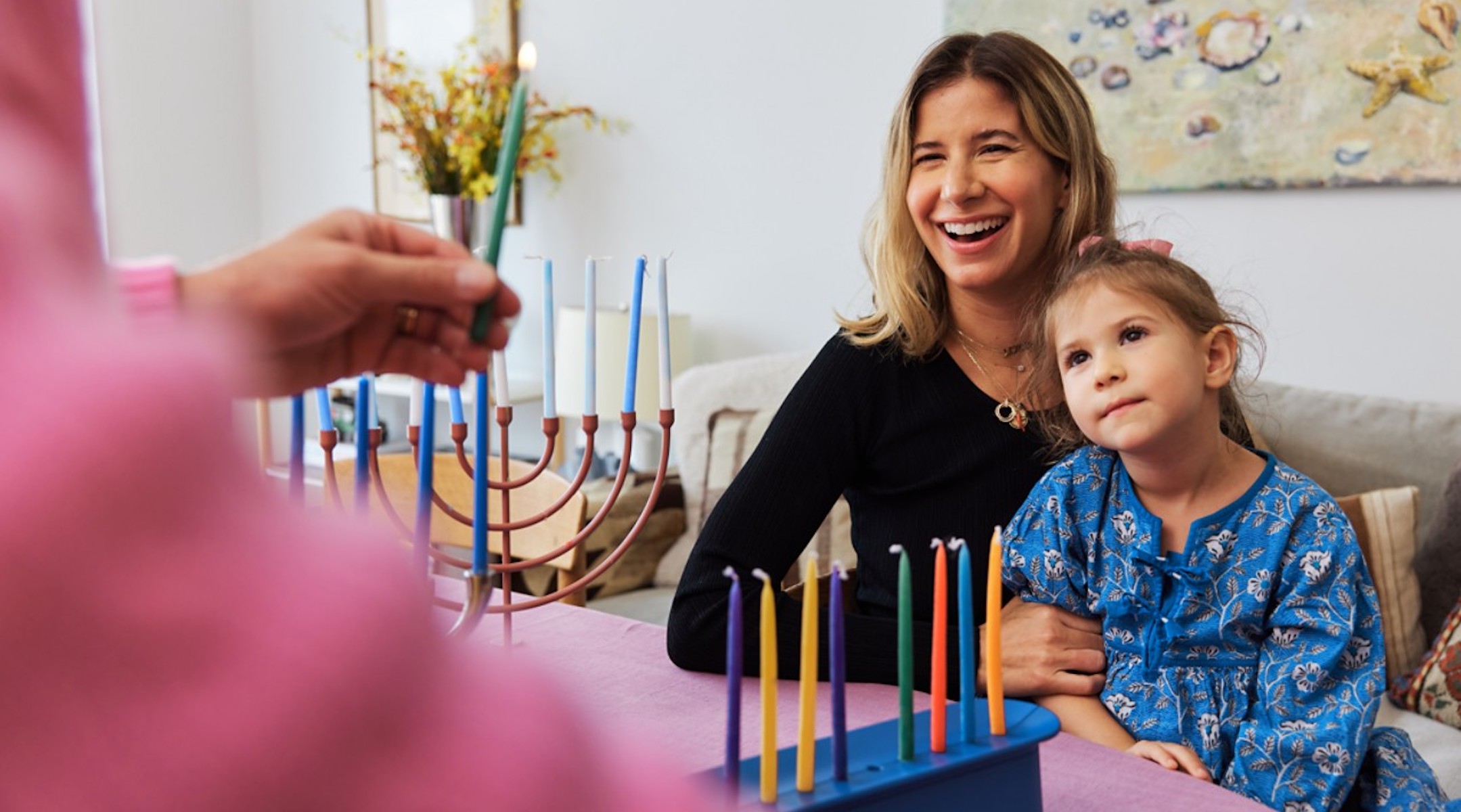 Each member of the family lights their own menorah on Hanukkah, the couple said. (Courtesy of Nordstrom)

The campaign features other notable New Yorkers celebrating the holidays, including actress Christina Ricci and her hairdresser husband, Mark Hampton, and actor and singer Leslie Odom, Jr., his wife Nicolette Robinson and their two kids. (Actress Robinson is Jewish, and though the Nordstrom ads mostly focus on their family’s Christmas situation, there is also a menorah in the photos.)

“When they came to us for the project, we actually didn’t realize how public facing it was going to be,” Brown-Rubinstein, an interior designer for Ralph Lauren stores, told the New York Jewish Week. “But we love Nordstrom and everything they stand for, and we feel like we’re just a great team of people. They are always featuring such great people from different communities and we love working with them.”

For the shoot, the couple said they had nearly complete creative control — they picked out the decor, food, prayer books and outfits they would be wearing for their pretend Hanukkah party.

“Everything was kosher, obviously. It’s pretty sick to have our yarmulkes and latkes in a Hanukkah ad and not some wack pajamas,” said Rubinstein. “They [Nordstrom] let it be authentic to us.”

Even the latkes — which one observer likened to a hockey puck — are legit: they brought them in from Russ and Daughters, Brown-Rubinstein said.

“Inclusivity is important to us as a company, and we know it is something our customers value too,” Red Godfrey, vice president of creative at Nordstrom, told the New York Jewish Week via email. “Our campaign spreads cheer by showing the real human connection through warm and intimate moments shared amongst loved ones in their most personal settings.

“We aimed to capture the authenticity of real families making merry together and giving us a glimpse of what the holidays look like in their homes,” Godfrey added.

Rubinstein is part of the Lubavitch community and was raised in Rhode Island, Maryland and Brooklyn — his parents now live in Crown Heights. Brown-Rubinstein, who grew up in Connecticut, attended Modern Orthodox synagogues as a child, but now considers herself more culturally Jewish. The couple is dedicated to raising their daughter with a strong Jewish identity.

“I’m Lubavitch — I live for mivtzoim,” Rubinstein said, referring to Chabad’s outreach to less observant Jews, such as the practice of Chabad emissaries asking New Yorkers on the street if they are Jewish during Sukkot and inviting them to shake the lulav.

Rubinstein said the experience of representing and reaching out to other Jewish New Yorkers via the Nordstrom campaign felt very similar. “It’s an honor,” he said.

Alongside the ads, Rubinstein collaborated with Nordstrom to design two handmade, luxury menorahs in the shape of a car and a truck that can be purchased on Nordstrom’s website for a cool $585 and $800 each. 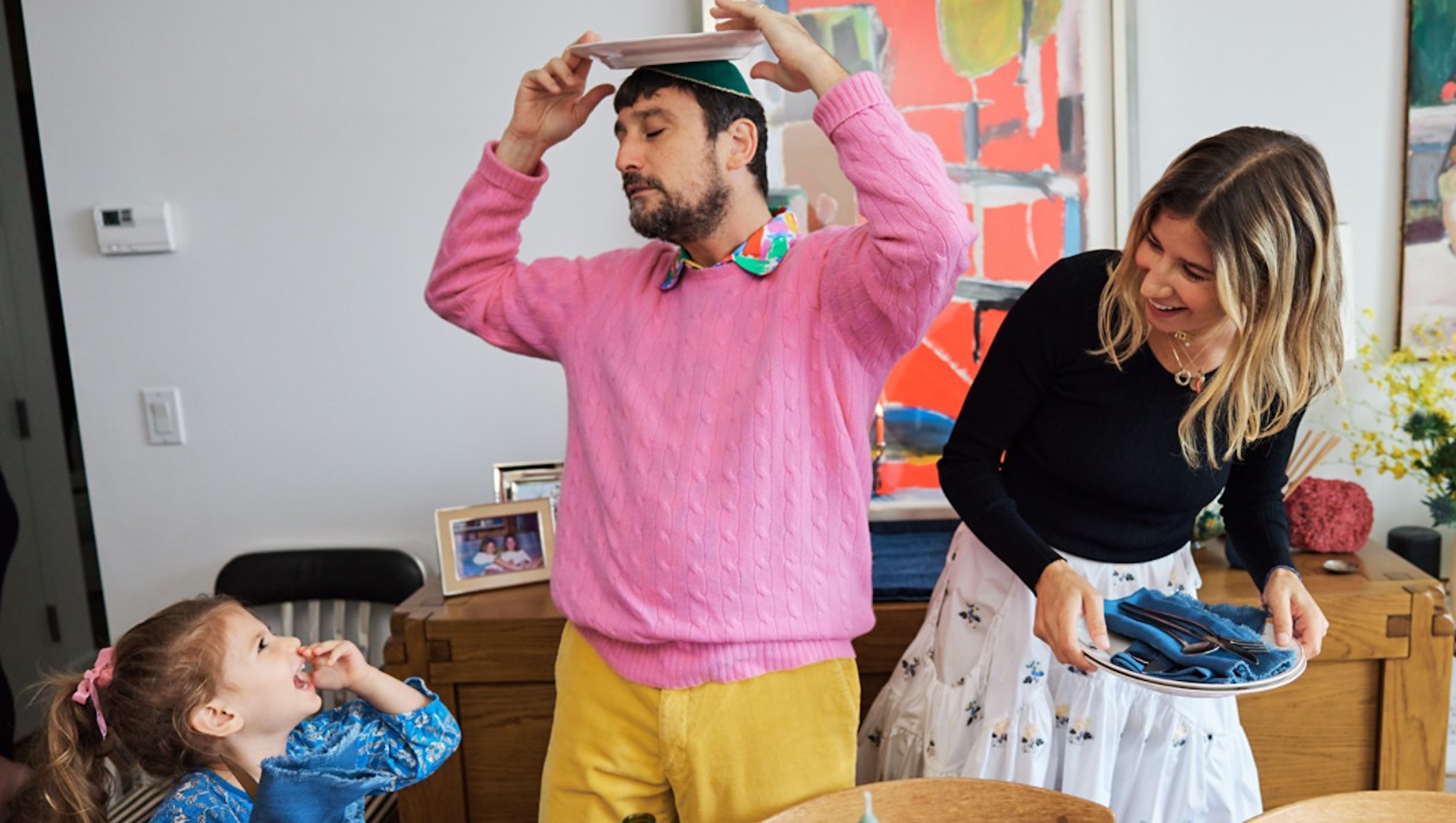 Mordechai Rubinstein and Sara Brown-Rubinstein live in Greenpoint with their daughter Isabella and are committed to creating a Jewish life for her. (Courtesy of Nordstrom)

The couple also curated their ideal holiday entertaining items on Nordstrom’s website, including menorahs, cutlery, dishes, and other gifts and shared their Hanukkah traditions with Nordstrom, which include making a latke recipe courtesy of Rubinstein’s sister, Chani.

Now that the eight-day holiday is officially here, the family, just like in year’s past, will light their own menorahs; eat latkes, sufganiyot and gelt; and spend time with family and friends at Hanukkah parties.

Though they have worked with Nordstrom before on a Father’s Day campaign, this is the first time the Rubinsteins have showcased their Jewish identity in such a public, outward-facing way.

“I’m like, very Jewy — I’m the most Jewish,” Rubinstein said. “I love sharing when I’m in Crown Heights with my family, or on Jewish holidays and stuff, I try to share as much as I can. But it’s not often that I get to incorporate it into work — like, never.”

“A big part of my work is documenting and capturing how people wear their clothes, so I’ll put up pictures [on Instagram] if I’m in Crown Heights or Hasidic Brooklyn. I’ll definitely photograph and post from there. But as far as modeling in a campaign like this, it’s something I’ve never really done. To be able to wear a yarmulke [in a campaign] is brand new,” he added.

Interestingly, unlike many American department stores — Macy’s, Neiman-Marcus, Bloomingdales and Bergdorf Goodman, to name a few — Nordstrom does not have Jewish roots. Founded in Seattle 1901 by Swedish immigrants who made their first fortune during the Alaskan gold rush, Nordstrom has been expanding ever since. They opened a seven-story flagship store on 57th and Broadway at the end of 2019.

“We’re proud to be a part of the community,” Godfrey said. “We’re particularly excited about the way this campaign is showing up in New York City and have received positive feedback from customers and local New Yorkers who are seeing the images on billboards, in the subway and on buses.”

For the couple, who met at a concert at now-closed Hiro Ballroom in 2007, the reactions to the ad from friends, family and strangers have also been their favorite part of the experience — a teacher at Isabella’s school called with excitement after seeing the family’s photos on the subway. Even strangers have taken to posting and tagging Rubinstein on Instagram when they see spot the ad.

“It’s really been very heartwarming, so many we haven’t spoken to in a long time have reached out,” Brown-Rubinstein said.

The family hasn’t seen the ad all together yet — Brown-Rubinstein and Isabella rarely take the subway — but Rubinstein said he travels on the train specifically so he can see it. “All I want is to get my family in front of the picture of ourselves on a city bus framed,” he said.