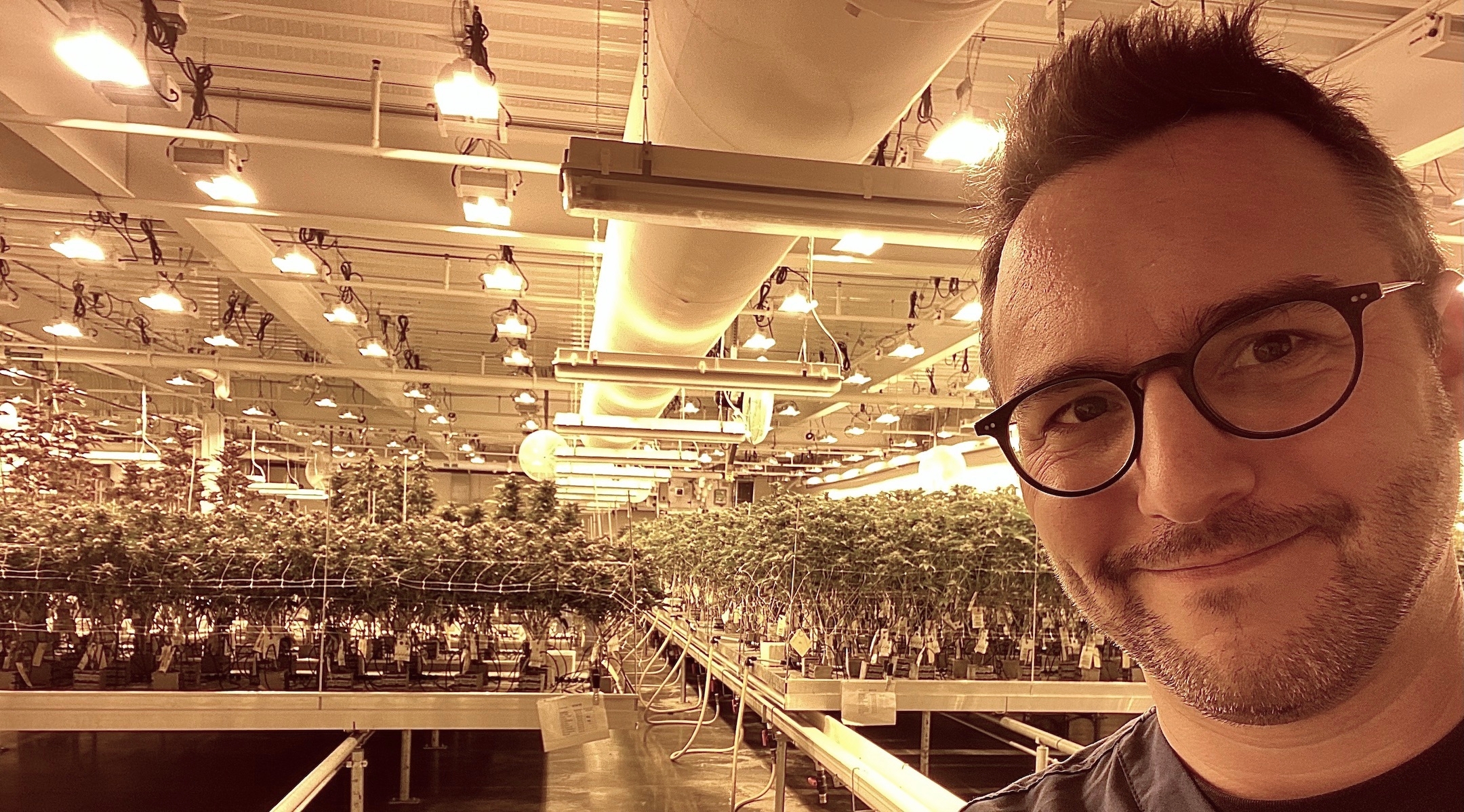 Rabbi James Kahn at the Maryland cultivation facility of Holistic Industries, where he serves as the executive director of social impact and corporate responsibility. (Courtesy)
Advertisement

(New York Jewish Week) — As New York gears up for a new landscape of legal marijuana, one rabbi will bring his experience retailing weed to help others “squeeze more out of life.”

Rabbi James Kahn is part of a company, “Keep It A 100,” that is one of the first to be licensed to open a cannabis dispensary in the state. When he wasn’t teaching Jewish college students or running chaplaincy services for a Jewish social service agency, he helped run a family-run marijuana business in Washington, D.C. and is the executive director of Liberty Cannabis Cares, the social impact arm of Holistic Industries, a prominent dispensary business in Maryland.

“Suffering is not a mitzvah,” Kahn, who was ordained at Boston’s Hebrew College and has served as the senior Jewish educator at the University of Maryland Hillel, told the New York Jewish Week. “Giving people permission to use cannabis to enjoy and to take time for self care, for healing, for connecting with people, it’s just another tool that Hashem has given us to live better lives.”

Keep It A 100 is one of the 36 winners of the state’s Conditional Adult-Use Retail Dispensary (CAURD) program, which offered the licenses to sell weed to people and nonprofits who had previously been convicted of marijuana-related crimes. New York’s first dispensary, opening Thursday at 750 Broadway in Manhattan’s Astor Place neighborhood, is being run by Housing Works, the HIV/AIDS service organization.

“When done right, cannabis can be a force for good — for individuals and the communities they live in,” Kahn said. “That is my mission.”

Kahn has partnered with Marquis Hayes, a Bronx native and former drug dealer who got out of prison in 2007 and has since become a highly regarded professional chef. He will source the product for Keep It A 100, while Kahn will provide capital and expertise. Their first “retail experience” will be on Long Island. 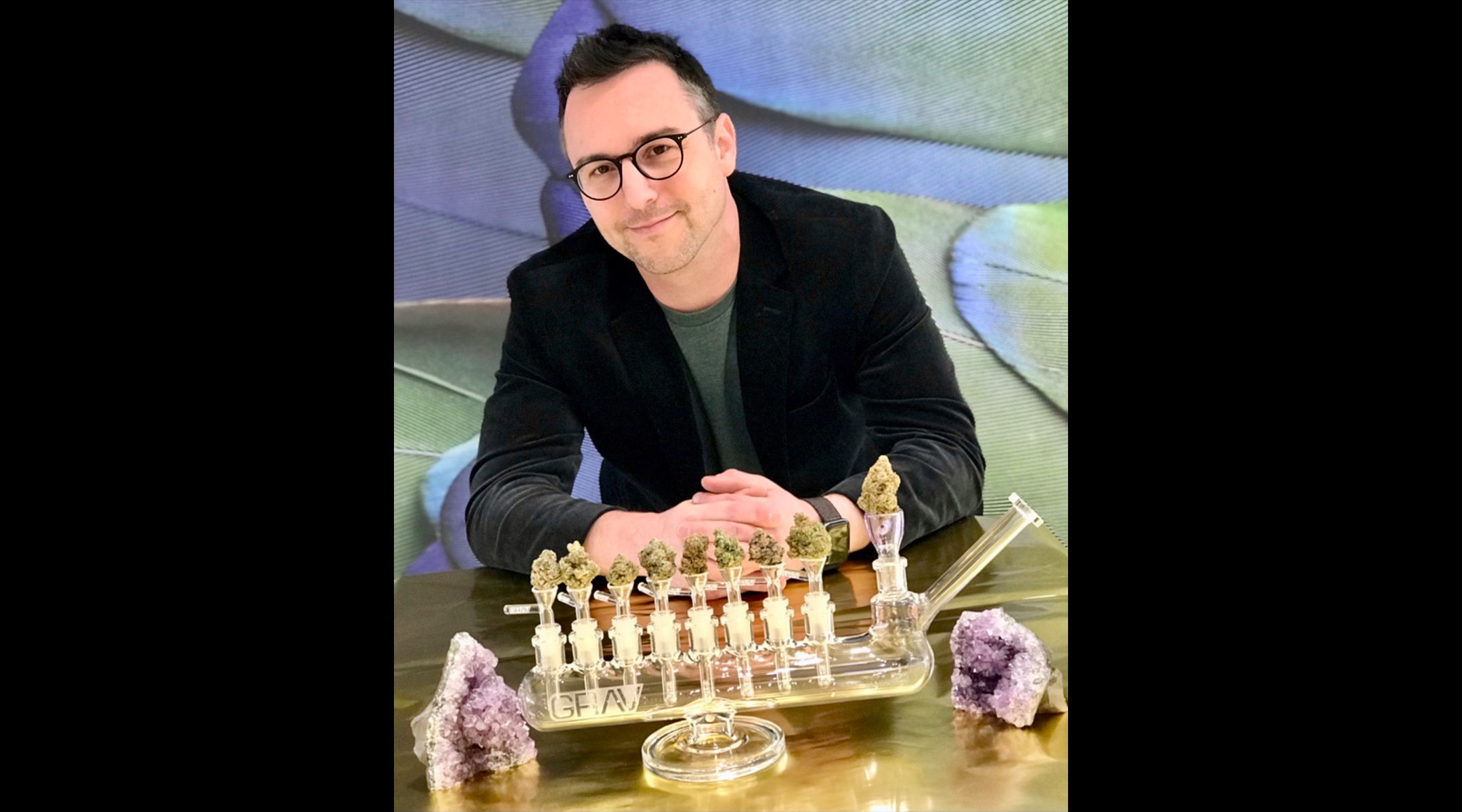 Rabbi James Kahn, shown with a menorah-shaped bong, saw the benefits of cannabis when his grandfather sought relief from multiple sclerosis. (Courtesy)

“It’s focused on giving licenses to people who have been injured by the war on drugs, who have really worked to not let that injury define them, but have come out of that place and form businesses that were profitable,” Kahn said of the CAURD program. “I wanted to take what I know about how to run a successful and impactful cannabis retail store and share that knowledge with a partner who really deserves this opportunity. I want to make sure he is as successful as possible.”

Kahn does not have a set date for when the dispensary will open, but said that “it will be in a few months.”

Kahn also worked at the Washington, D.C.-area Jewish Social Service Agency. At Liberty Cannabis Care, he works “to make cannabis a force for good in every state we operate in, and in every neighborhood we’re lucky to be a part of,” according to its mission statement.

Other partners in Keep It A 100 include psychotherapist Kim Stetz and experienced Maryland cannabis business owner Christina Betancourt Johnson.

Kahn’s connection to cannabis goes back to his grandfather: When Kahn was a teenager, his mother’s father suffered from “severe” multiple sclerosis and asked Kahn to help him find marijuana.

“He was hesitant to try cannabis because of the stigma that surrounded it,” Kahn said. “He was not a fan of hippies or cannabis. An aide offered him cannabis and it worked. The first bong I ever saw was my grandfather’s.”

Kahn’s father, Rabbi Jeffrey Kahn, was a rabbi during the AIDS epidemic in the 1980s, where many people were “benefitting from cannabis around that time.”

“[My father] was thinking about it back then,” Kahn said. “There were a lot of folks who were concerned about the stigma and shame that was attached to cannabis. Was cannabis kosher? Not just from the technical standpoint — it is just a plant — but from a moral standpoint.”

Kahn said that he sees his dispensaries as a gathering place for “folks of every kind and background who love cannabis.”

“It’s a place to be seen and to be valued and to get to talk about their favorite plan,” Kahn said. “Marquis is a world-renowned chef and knows how to create this unique experience.”

He added that the dispensary will also offer a delivery service, which will “probably open prior to the retail store.”

He added that while cannabis has not been “at the forefront of the modern Jewish age, the cannabis industry is full of Jews.” A current exhibit at the YIVO Institute for Jewish Research, “Am Yisrael High: The Story of Jews and Cannabis,” also explores the extensive Jewish presence in the weed industry, legal and not.

“Judaism is relevant because it helps us squeeze more out of life,” Kahn said. “It’s helped me use cannabis in a way that I would call sacred.”

Kahn said he is fascinated by the history of cannabis within Judaism, mentioning an archaeological dig site in Tel Arad in Israel, where traces of cannabis were found in the ancient remnants of a Jewish temple.

“This would have created a dense smoke that is responsible for creating a high from cannabis,” Kahn said.

He added that he has had “interesting experiences reading sacred texts while consuming cannabis.”

“All cannabis is medicine,” Kahn said. “The word ‘recreational’ is often seen as less than. We Jews have long known the value of rest, of stopping. That’s at the heart of Shabbat. In order to have holiness, we need to give ourselves the space to experience it.”