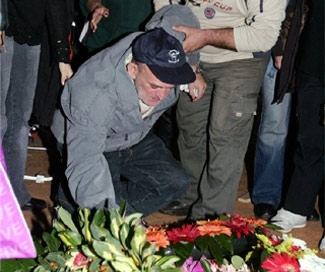 Sderot resident Michael Slotzker touches the grave of his wife Faina, who was killed by a Palestinian Kassam rocket Nov. 15.

SDEROT, Israel, Dec. 4 (JTA) — A warm, late-autumn sun spills over empty swing sets and slides. The children of this working-class border town have no time to play. Listening for alerts of falling rockets from Gaza, they scurry between home and school.
It’s a routine that has intensified in recent weeks with the number of Kassam rockets fired toward Sderot increasing. Even in the days after a fragile cease-fire goes into effect, the unease continues.
“My kids won’t sleep upstairs anymore,” says Sigal Avitan, 38, who grew up here and cannot imagine leaving — not even after more than 1,100 rockets shot at the area in a little over a year.
“Every night I have to spread out blankets on the floor of the living room. My two oldest sleep there, my two youngest sleep in my bed,” she says. “This is no kind of life. This is not normal.
“This morning my daughter said she did not want to go to school and I told her, ‘But there is a cease-fire now.’ She replied, ‘Yesterday there was also a cease-fire and a rocket fell while I was walking to school.’ ”
A sleepy town of low-rise buildings and eucalyptus tree-lined streets in southern Israel, Sderot is comprised of a hodgepodge of immigrant groups — extended Moroccan families that first settled here in the 1950s and more recent arrivals from Ethiopia, Ukraine, Azerbaijan, Russia and other countries of the former Soviet Union.
The wave of Russian-speaking immigrants to Israel that began in 1990 more than doubled Sderot’s population to 24,000. Residents describe it as a close-knit community where people look out for one another.
Sderot is one of Israel’s many development towns. The concept of establishing towns in the rural periphery was created soon after the state was established in 1948, part of a policy to settle areas sparsely populated by Jews.
With little infrastructure or industry, many development towns floundered economically. They sometimes are portrayed as dumping grounds for immigrants, usually among the weakest socioeconomic segments of Israeli society.
Sderot is far, by Israeli standards, from the country’s more prosperous center. But in the last six years it has found itself unwittingly on one of the front lines of the Israeli-Palestinian conflict.
Its location about two miles from the Gaza border has made Sderot an easy target for terrorists’ Kassam rockets. Before a surprise and partial truce went into effect about a week ago, fighting had escalated, especially in recent months, between the Israeli army and Palestinian terrorist groups. Two Sderot residents, both Russian-speaking immigrants, were killed in the past two weeks.
After Israel’s historic withdrawal from Gaza was completed in September 2005, the rocket fire that had been aimed mostly at Gaza Jewish settlements was turned to the next available target: Sderot and surrounding villages and farms. However, even in the five years before then, rockets were launched sporadically at Sderot.
Residents say they’re frustrated by a feeling that they don’t matter to the government or the rest of the public. They feel stuck in a state of second-class citizenship even as they put their lives on the line.
“Nation, be ashamed. You have forgotten us in this war,” reads a small, hand-printed sign taped to a pole along the roadside.
“This has become a depressed place,” says Hanan Klein, 24, who knows many people who have moved out of town recently. “Living here is like playing Russian roulette. You hear an alert and the rocket will fall where it will.”
Business has plummeted at the hair salon where Klein works. Those with appointments cancel after a rocket scare. Others prefer to get haircuts and do errands outside of town.
Bloria Dadon, 55, the owner of a small business in Sderot, wore a sign that read “Save Our City” at a demonstration by local businesspeople Monday.
“We want security and business … we don’t want pity or donations,” she says. “It’s been six years [of Kassams] and no prime minister has visited us even once.”
“They think we’re weak,” she adds, referring to the country’s image of Sderot. “We are simply good, quiet people, but now it’s time to start speaking out.”
When Amir Peretz, a former Sderot mayor and hometown hero, took office as Israel’s defense minister, there were hopes he would at last champion the underdog town.
But Peretz, a former trade union leader with scant military background, was criticized for his decisions in the Lebanon war this summer and has yet to recover politically. Sderot residents support him as one of their own, but some wonder about his effectiveness.
Across a major road and open, yellowing fields lies Gaza. Beyond the border are the squat buildings of Beit Lahiya and Beit Hanoun, the towns from where the rockets are fired.
It’s an area Israeli forces had retaken in the past five months prior to the cease-fire. About 400 Palestinians have been killed in the fighting. Some were terrorists, others civilians caught in the cross-fire.
Longtime Sderot residents remember more peaceful days when they shopped in those towns and enjoyed friendly relations with Gazan neighbors.
Sadia Cohen, 71, has been living in Sderot since he emigrated from Morocco in 1955. A retired electrician, he now does odd jobs at a local elementary school. Part of his work lately is to welcome the children to school in the mornings, hoping a smile and friendly question will help soothe them.
“We all just want to live,” he says of the people of Israel and Gaza. “But what happens? They shoot. We shoot. And we all sit in the middle and suffer.”
Meanwhile, Liron Maimoni, 24, steps out of a bridal salon onto an empty dark street, her hair curled and her hands smoothing over a strapless dress of layered silk. She and her groom grew up in Sderot but did not consider celebrating here.
Instead, they ride in a ribbon-festooned car to their wedding — a safe distance outside of town.