In search of Heschel’s legacy 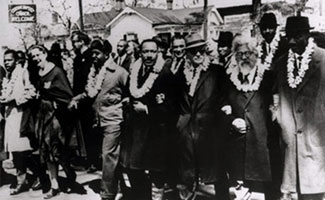 NEW YORK, Jan. 8 (JTA) — They are forever joined in an iconic image of the rabbi and the preacher marching arm in arm for civil rights, but Abraham Joshua Heschel and Martin Luther King Jr. are this year linked in commemoration as well. As Americans pause to mark King’s memory Jan. 15, the Jewish community is gearing up to honor the legacy of one of the 20th century’s great Jewish thinkers on the 100th anniversary of his birth.

In March, Brandeis University will host a two-day symposium on Heschel, who was born Jan. 11, 1907, and over the next 65 years became one of America’s most prominent rabbis, renowned for his political activism and his innovative writings on theology and the Jewish prophets.

Other events are scheduled at the Manhattan school that bears Heschel’s name, at a spiritual retreat center in Connecticut and in cities as far afield as London, Berlin, Milan and Krakow.

King’s birthday has become a national holiday and an occasion to reflect on America’s interracial relations, but at the Jewish Theological Seminary, the institution where Heschel taught for the last 27 years of his life, no public memorials are planned.

Heschel’s relationship with JTS is said to have been fraught with tension. But the seminary’s incoming chancellor, Arnold Eisen, says a two-hour meeting he had with Heschel in his book-laden office around 1970 was personally transformative.

“It overwhelmed me,” said Eisen, adding that he considers Heschel the most important Jewish thinker of the 20th century.

Eisen’s predecessors, however, didn’t always hold Heschel in such high esteem, seeing him as something of an outsider — a mystic and a political activist in an institution renowned for neither.

In a 1997 institutional history of JTS that runs more than 1,700 pages, the only extended section on Heschel details his “mistreatment” by the administration. Elsewhere, he is described as a “fish out of water” and as oppressed by the school.

“The seminary was not a place that was receptive to his spiritual message or to any form of spirituality at the time,” Rabbi Michael Lerner, founder of the progressive journal Tikkun and one of a small group of students who gathered around Heschel at the seminary in the 1960s, told JTA.

“Heschel felt very isolated there, and that isolation increased when he began to take the ethical dimension of Judaism seriously and apply it to contemporary life,” added Lerner, who was not ordained at JTS.

Such claims prompt counterclaims that Heschel’s legacy is being appropriated to advance a political agenda, or that the seminary’s critics are “misreading the data.”

Some point to Heschel’s outspoken opposition to the Vietnam War, which ran afoul of conservative figures at the seminary. And of course there was his activism — a common avocation in the ferment of the 1960s, perhaps, but hardly typical of the bookish rabbis and academics who were his colleagues.

Nevertheless, Heschel’s legacy has aged well. He is the most frequently cited rabbinic source on issues of social justice and perhaps is most widely remembered for the arresting photo of him marching beside leaders of the civil rights movement in Selma, Ala., in 1965.

His influence is felt everywhere from the National Mall in Washington, where thousands of Jews of all denominations gathered last summer to protest the atrocities unfolding in Darfur, Sudan, to the slums of the Third World, where American Jews now volunteer through groups like the American Jewish World Service, an organization whose leader was influenced by her childhood encounters with Heschel.

“He was very much a person who enjoyed his Judaism and his scholarship and made a huge effort to apply it to the times in which he lived,” AJWS President Ruth Messinger said. “And that had a real impact on young and not-so-young Jews at that time. And that’s something that we at AJWS continue to do.”

While it was unusual in Heschel’s era to see bearded rabbis marching with black leaders, Jewish leaders are now routinely active on the most pressing issues of the day, a change many lay squarely at the feet of the soft-spoken professor with thick black glasses and an unruly, Einstein-esque shock of white hair.

Heschel was ahead of his time in other ways, too. He was among the first rabbis to energetically reach out to leaders of other faiths, meeting with Pope Paul VI at the Vatican in 1964 and becoming, in 1965, the first rabbi appointed to the faculty of New York’s Union Theological Seminary, a liberal Christian institution.

Along with Martin Buber, Heschel is the most widely read 20th-century Jewish thinker at Christian seminaries and bible colleges.

“More than any other single Jewish author, his works have been absolutely life-changing,” said Marvin Wilson, a professor of bible and theology who teaches a seminar on Heschel at Gordon College, a Christian college in Wenham, Mass.

Wilson says that next to the Bible, Heschel’s “God in Search of Man” is the most influential work he has ever read.

“For Heschel, the God of scripture is alive, he’s dynamic, and he has pathos toward humanity,” Wilson said. “That for Christians is a very attractive concept, that God is the reality to come to grips with.”

While some argue over what was Heschel’s greatest achievement, it was his legacy of political activism, and in particular his friendship with King, that made him an icon in the Jewish community and beyond.

“They were kindred spirits,” said Heschel’s daughter, Susannah, a professor of Jewish studies at Dartmouth College.

After Heschel’s death in 1972, the family was visited every Friday afternoon for years by the rabbi of a small Chasidic synagogue in Manhattan where Heschel occasionally had prayed.

Susannah Heschel says her father felt at home there, as it reminded him of his childhood in Poland. It was that kind of compassion, she says, that inspired him to leave the comforts of the academy to pursue his social-justice work.

“That moment, when Rabbi Cywiak came to the door, was a reminder of who my father really was,”she said. “And in a sense, that was the moment of his inner being, of his heart and his soul. And it was out of that that he went to march in Selma.”