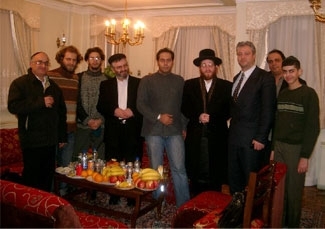 VIENNA, Jan. 9 (JTA) — Three lawsuits have been filed against a Viennese rabbi who attended a Holocaust denial conference in Iran in December. The suits, filed by the Vienna Jewish community, the Documentation Center of the Austrian Resistance Movement and a Jewish Holocaust victim who has not gone public, accuse Moishe Arye Friedman of Holocaust denial and propagation of Nazi ideology.

Both charges carry large fines and jail time, though the suits’ chances of success are unclear.

“Let me say that there are moments when you have to do something even when it’s not sure when it will be successful,” said Raimund Fastenbauer, general secretary for Jewish affairs for the 7,500-strong Jewish Community of Vienna.

International media were filled with photographs of Friedman, wearing traditional Chasidic garb and long sidelocks, warmly shaking hands with a beaming Iranian President Mahmoud Ahmadinejad at a conference of Holocaust deniers in Tehran.

The images enraged Jews around the world, who argued that the presence of Jews — even from fringe groups like the Neturei Karta or of someone like Friedman, who does not appear to represent any group — allows rabid anti-Zionists and anti-Semites a cover for their ideology.

Most of the speakers at the Iranian Foreign Ministry event, including former Ku Klux Klan leader David Duke, argue that Zionists invented or exaggerated the Holocaust, which took 6 million Jewish lives, to justify the creation of the State of Israel.

“I am not a denier of the Holocaust, but I think it is legitimate to cast doubt on some statistics,” The New York Times reported Friedman as saying during the conference.

According to the Times, the Austria Press Agency reported that Friedman calculates the Holocaust death toll as closer to 1 million. He told the BBC during the conference that the Holocaust was used as a “tool of commercial, military and media power.”

Speaking to JTA by phone, Friedman would not elaborate on his participation in the conference.

He did, however, try to drum up interest in his meeting with Iranian Jews, who he said “visited me in Tehran at the guest house of the foreign minister where I was staying. Their situation in Iran is very good. They came to me… and gave their presents to me.”

A Brooklyn native, Friedman grew up in the anti-Zionist Satmar Chasidic community there. The Satmar community, however, issued a statement condemning those who attended the conference.

Nor is Friedman affiliated with the Neturei Karta, an anti-Zionist sect known for its association with groups and individuals devoted to the destruction of Israel, such as the late PLO leader Yasser Arafat and Ahmadinejad.

Friedman is the self-proclaimed chief rabbi of the “Orthodox anti-Zionist Jewish community in Vienna.” The Austrian press, which has shown a particular relish for documenting Friedman’s outlandish behavior, reported that he has hundreds, even thousands of followers.

But Rabbi Josef Pardes, head of the Mizrachi Orthodox congregation in Vienna, said Friedman “has no followers at all. He is all alone. No Jew in Vienna will have anything to do with him.”

Paul Chaim Eisenberg, Austria’s chief rabbi, said the press indeed likes to write about rabbis who criticize Israel, “but I think now even they understand that he does not represent anyone but himself, maybe at most five other people.

“The whole Orthodox world has disassociated itself from Friedman,” Eisenberg said. “Even those who are against Israel would never dream of attending a conference that denied the Holocaust.”

Fastenbauer said the community board would meet soon and it was likely that Friedman would be “thrown out of the Jewish community.” He also said that since the conference, some fervently Orthodox Jews have spit in Friedman’s face in the street and that police had to be called in. No further details were available.

Contradictions arise between Friedman and the organized Jewish community on even basic details. Although Friedman calls himself a rabbi and is often referred to as such in the press, many Jewish authorities say he was not ordained.

Friedman moved to Vienna some 10 years ago from Antwerp, his wife’s hometown. He fell into a dispute with the Viennese Jewish community over his effort to control a synagogue, and four years of court battles followed.

The tiny synagogue operated under the auspices of the Vienna Jewish Community, an umbrella group recognized and funded by the government. Fastenbauer said Friedman had been invited to lead the congregation, but he “tried to take control of the synagogue. He said everything there, including the Torah scrolls, belonged to him.”

The result, according to Fastenbauer, was that the synagogue members ousted Friedman but were so tired of the dispute, they stopped going there.

“He is alone there now,” Fastenbauer said.

Friedman, however, told JTA that he had been victorious in his court cases involving the “Zionist community of Vienna.” He added that the synagogue had been founded in order to be independent from the official community.

“We pray for the peaceful destruction of Israel,” he added.

For the trial he obtained free legal aid from Evald Stadler, an Austrian ombudsman, defender of a priest who accused Jews of ritual murder and former adviser to far-right politician Joerg Haider and his Freedom Party. Haider is a vocal critic of the Viennese Jewish community, particularly its Holocaust restitution efforts and the money it receives from the government.

Friedman’s name has been linked in the Austrian press with extremist Austrian politicians such as Andreas Molzer, a member of the European Parliament who hung the Palestinian flag outside his home during Israel’s war with Hezbollah last summer.

Stadler and John Gudenus were guests at the bar mitzvah of Friedman’s son in 2005. Gudenus, a former member of the Austrian Parliament, has publicly questioned the existence of gas chambers during the Holocaust.

“Friedman is a fig leaf for anti-Semites who can say they have a Jewish ally,” said an Israeli diplomat who asked not to be named. “He was wearing a kaffiyeh when he went to hug Arafat in Paris,” the diplomat said, referring to Friedman’s visit to Arafat in the hospital before the Palestinian Authority president died.

In May, Friedman met with Hamas member and P.A. Cabinet Minister Atef Adwan in Stockholm, attempting to strengthen ties between the terrorist group and anti-Zionist Jews.

Friedman told JTA that he and his followers were planning an explanation of the Tehran conference.

Hannah Lessing, general secretary of the Austrian National Fund for Victims of Nazism, said she hopes prosecutors “take a serious look at charging Friedman for denying the Holocaust.”

“When some non-Jews see Friedman embracing Ahmadinejad, what are they thinking?” Lessing said. “They are laughing. It’s disgusting.”