Is outreach to Muslims effective? 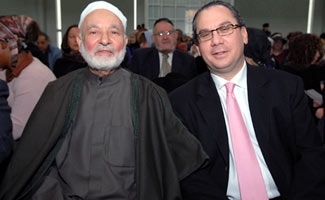 NEW YORK, Jan. 22 (JTA) — It was billed as a historic first — the visit last November of an imam to the New York Synagogue. But the visit turned sour when the imam, Omar Abu Namous, launched into a barrage of criticism of Israel, calling for a binational state of Arabs and Jews to replace Israel and denying the historical record of Arab belligerence against the Jewish state.

Earlier this month they tried again, this time at Abu Namous’ mosque, the Islamic Cultural Center of New York, the city’s largest.

Timed to coincide with Martin Luther King Day, the event was filled with lofty rhetoric about tolerance and coexistence. Weightier issues such as the Arab-Israeli conflict were officially banned from the discussion.

But toward the end, Schneier pressed Abu Namous to speak out against anti-Semitism in the Muslim world, and in particular against a major London mosque that reportedly is selling a DVD in which Jews are described as pigs who will be exterminated on the day of judgment.

Abu Namous responded with a speech about the Middle East conflict, arguing that its persistence had enabled Islamic extremists to become central political players, despite what he said was widespread disdain in the Muslim world for their ideology.

“The Muslim nation is not able to stop them,” Abu Namous said, even though he said that most Muslims reject the extremists. “This is a political problem, not a religious one. We are as much victimized as you are.”

The exchange highlighted the difficulties Jewish groups face in advancing dialogue with Muslims and in weeding out those with extremist views.

Despite enormous strides in recent years in Jewish relations with the black and Christian communities, dialogue with Muslim Americans still presents significant challenges, from profound disagreements regarding the Israeli-Arab conflict to substantial mistrust of Muslims who sometimes appear to send mixed messages.

It was the latter concern that prompted the Conference of Presidents of Major American Jewish Organizations to condemn Palestinian Authority President Mahmoud Abbas last week for remarks earlier this month that seemed to encourage violence against Israelis.

Abbas is widely viewed as a moderate alternative to Hamas and someone with whom Israel should negotiate. But his call for violence at a Jan. 11 rally of his Fatah movement, which like Hamas has been deeply involved in terrorism against Israelis, “casts doubt” on his commitment to a peaceful negotiated settlement, the Presidents Conference said.

“Psychologically, the Jews and the West are yearning for moderates to exist and to articulate what their moderation consists of,” said Charles Jacobs, director of the David Project, a Boston-based pro-Israel group. “It’s driven by hope that moderation exists and can prevail. And then there is tremendous disappointment when it doesn’t work out.”

That kind of disappointment was evident on both sides after the November meeting between Schneier and Abu Namous. Schneier said after the event that he had not been fully aware of the imam’s views. Abu Namous told JTA he believed he was being interrogated for past statements and felt forced to defend his religion.

Both sides seemed to studiously avoid controversy in their second conversation, taking the Israeli-Palestinian conflict off the table and veering toward seemingly safer theological territory, emphasizing the common Abrahamic heritage of the Jewish and Muslim faiths.

The approach made for a less confrontational exchange, but it sidestepped what some regard as the central dividing issue between Jews and Muslims.

“It’s kind of like the elephant in the room,” said Danielle Josephs, a Rutgers University student and founder of the Middle East Coexistence House, where Jewish and Muslim students live together and attend coexistence seminars.

Some say theology is an even more dangerous discussion than politics, given a tendency in the Muslim community to view non-Muslims as infidels.

What’s really necessary, observers say, is not a search for moderate Muslim voices but a reformation within Islam comparable to Nostra Aetate, the landmark 1965 Vatican declaration that absolved Jews of guilt for the killing of Jesus and paved the way for dialogue between the Jewish community and the Catholic Church.

“The fact of the matter is, I think there is a reformation taking place that might go on for another hundred years,” said David Carroll, a New York Archdiocese official involved in interfaith dialogue with both Jews and Muslims. “And what it will end in, we do not know.”

Like others involved in interfaith efforts, Carroll stresses the importance of choosing dialogue partners carefully, though it’s precisely that desire — to vet Muslim partners for their views of Jews and Israel — that generated such friction at the November meeting with Abu Namous.

Still, Schneier rejected the notion that dialogue should be cut off entirely, citing experience from his early days of reaching out to blacks when the Black Power movement — with its strains of anti-Semitic rhetoric — led many Jews to cut them off altogether. Today, Schneier said, black anti-Semitic voices have been marginalized.

Abu Namous also told JTA that his experience in November had caused him to revise his view of the Middle East conflict. Seeing Jewish anger in the face of his call for Israelis and Palestinians to unite in one state, and when he denied that Arab countries had ever attacked Israel, he now believes the ideal formula would be “a two-state solution under a federal government.”

The modification of Abu Namous’ political views notwithstanding, few consider the objective of interfaith dialogue to be agreement — that would be nearly impossible — but to develop trust and an ability to see one’s interlocutors as human beings.

Schneier, for his part, sets a more ambitious goal.

“I think the time has arrived to move from dialogue to action,” he said. “I think the ultimate test, and the way that one can truly gauge the measure and the growth of this dialogue, is when push comes to shove and we are confronted with a situation that would require the imam’s response. Let’s see how he reacts.”