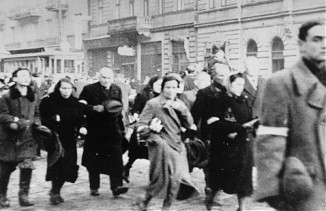 Jews are rounded up for deportation from the Warsaw Ghetto circa 1942. (USHMM, courtesy of Instytut Pamieci Narodowej)
Advertisement

NEW YORK (JTA) — Reaction to recent revelations of corporate complicity, unrevealed insurance company involvement and the great number of IBM punch cards among the papers in a secret archive in Bad Arolsen, Germany, have reignited a grassroots campaign among Holocaust survivors to recover Nazi-era insurance claims against companies such as the Italian insurance giant Generali.Following a series of revelations that began last year in the Jewish media, grassroots survivor and second-generation groups in Miami and New York have mounted a fierce campaign in Congress to supersede international agreements brokered by the State Department to settle insurance claims through the International Commission on Holocaust Era Insurance, or ICHEIC, as well as adverse Supreme Court rulings that have denied survivors the right to sue to recover policy claims or disgorge profits from the insurance companies.The groups have used revelations about the unreleased Bad Arolsen records as a rallying point to prove that their insurance claims have been pushed into oblivion. Key congressional leaders agree and have promised swift action.Thus, two separate issues — the opening of the Bad Arolsen archives and the quest to recover unpaid insurance claims — have been joined into a single cause among survivor groups and key congressional leaders.The latest round of efforts began last fall when officials of survivor groups unsuccessfully demanded that ICHEIC and other authorities postpone the final disposition of claims pending further research in the International Tracing Service files at Bad Arolsen. The groups include such elected bodies as the Miami-based Holocaust Survivors Foundation USA and the Queens, N.Y.-based National Association of Jewish Child Holocaust Survivors.The International Tracing Service, or ITS, was established by the Allies after the war to help families trace Holocaust and war victims. The Allies forwarded millions of captured documents to the facility in Bad Arolsen. The International Red Cross was given custody and control of the archives, which provided information on individuals only to survivors and their families. A typical family request could take years to process.In January, Holocaust survivors petitioned federal Judge George Daniels to reject a settlement with Generali because ICHEIC had failed to publish the names of all Jews whom the company insured before World War II. The petition, which included numerous quotations from the Jewish media about Bad Arolsen’s insurance documentation, decried the alleged rush to judgment.Daniels temporarily delayed a decision, but ultimately finalized the permanent settlement with a limited extension for claims based on discoveries that might emerge from the Bad Arolsen archive.Having lost in court — and convinced that established Jewish organizations would not aid them — survivor groups lobbied Congress to link the campaign to open Bad Arolsen to the separate campaign to recover insurance claims and compel disclosure of the names of those insured.On March 28, U.S. Rep. Ileana Ros-Lehtinen (R-Fla.) introduced the Holocaust Insurance Accountability Act of 2007 to enthusiastic support on both sides of the aisle.The act seeks to supersede the international agreements brokered by the State Department to settle insurance claims through ICHEIC. The bill concludes that ICHEIC, which is due to terminate operations soon, “did not make sufficient effort to investigate” or compile the names of Holocaust-era insureds or the claims due to survivors. The bill adds that recent media disclosures about the contents of Bad Arolsen have given new justification to such legislation.In response, a representative for ICHEIC said the commission had accomplished its mission of identifying and settling unpaid Holocaust-era life insurance claims by processing more than 90,000 claims and distributing more than $306 million to more than 48,000 claimants. More than half of the funds distributed via ICHEIC were the result of its archival research and matching work, the representative said..Still, Ros-Lehtinen’s bill would require insurers to disclose comprehensive lists of Jewish policyholders from the Nazi era. The legislation also would enable federal lawsuits to recover money from insurers, thus overruling ICHEIC’s final word and a variety of Supreme Court rulings that have denied survivors’ rights to sue or gain access to policyholder names.The proposed law thus would trump both the executive and judicial branches on Holocaust-era insurance.The same day that Ros-Lehtinen’s bill was introduced, Rep. Robert Wexler (D-Fla.), chairman of the House Foreign Affairs Committee’s Subcommittee on Europe, convened an extraordinary hearing on Bad Arolsen. The purpose was to orchestrate congressional pressure on the 11 governments — the United States, France, England, Belgium, Greece, Luxembourg, Netherlands, Poland, Israel, Italy and Germany — that control the ITS to rush full access to its archives, providing the insurance information that has been submerged for decades.Members of the Foreign Affairs Committee sat stony and grim faced, some holding back tears, as the hearing unfolded about the Bad Arolsen archives and their impact on survivors’ decades-long effort to recover their insurance claims.Survivor David Schaecter of Miami, who admitted he was “emotionally overcome,” spoke of impoverished survivors in South Florida who cannot afford housing or medicine because their insurance payouts were first denied by the insurance companies and then by ICHEIC.”I am begging this Congress,” Schaecter implored, “to please believe us. We have been wrongly stripped of our pride and property.”Leo Rechter of Queens pleaded, “Open up Bad Arolsen to expose the Holocaust profiteers.”Rep. Albio Sires (D-N.J.) held back tears both in the hearing room and in the corridor. Wexler promised to fast-track legislation and action to open Bad Arolsen.”We will take the next step and then the next step, and then the next step,” Wexler said.(Edwin Black is the New York Times best-selling author of the award-winning “IBM and the Holocaust” and is responsible for a series of investigations revealing the contents of the ITS archives at Bad Arolsen. His stories on the subject can be viewed at http://www.ibmandtheholocaust.com/BadArolsenArticles.php.)