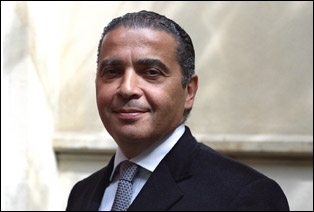 PARIS (JTA) – On the wall of Pierre Besnainou’s top-floor office, next to a large rooftop patio overlooking the Arc de Triomphe in Paris, hangs a painting of a desert oasis scene. Elderly and young Jewish men arrive, a young Jewish woman cooks, and their Arab companions bring in the camels and set up camp. The sense of Jewish-Arab cohabitation is obvious and striking, a throwback to Besnainou’s childhood and adolescence in Tunisia.”I believe it and you’ve got to believe it too – Arabs and Jews can live together,” says the 51-year-old president of the European Jewish Congress. “I’m not giving any lessons, but I am in Jerusalem and Tel Aviv very regularly.”Besnainou is seeking to win a second two-year term heading the EJC, running against Moshe Kantor, the president of the Russian Jewish Congress, in a race that has been hotly contested. The June 26 vote at the group’s general assembly in Brussels is seen by insiders as too close to call.The EJC has two major areas of concern: dealing with the security and well-being of some 3 million European Jews and promoting Israel’s position to European leaders and their constituents. In his first term, Besnainou said the beating death of a young Jew, Ilan Halimi, in a Paris suburb in February 2006 “was one of the most difficult situations I have ever faced.””They tortured him for three weeks because they thought he was rich, and then because they hated Jews,” Besnainou said. French and European Jewish leaders called on French officials to toughen their stand against anti-Semitism, and Interior Minister Nicolas Sarkozy responded. The number of anti-Semitic incidents in France has dropped, and Sarkozy in April won the French presidency. Besnainou, a millionaire businessman who says he has retired from the business world, paid for Halimi’s funeral and burial in Jerusalem. He has been taking care of the Halimi family out of his own pocket. “Every European country must be more severe against anti-Semitic violence,” he said. Besnainou came to France at age 20 from Tunisia and went into business importing electronic and audiovisual equipment. That drive propelled him to create and develop the Liberty Surf Internet portal, which he later sold.Now he says he devotes his time to the EJC and the United Jewish Social Fund, a Jewish welfare organization in France that he serves as president.In March 2005 he founded AMI, Aliyah et Meilleure Integration, which complements the Jewish Agency on the model of Nefesh B’ Nefesh in the United States. Hundreds of French Jews have already availed themselves of AMI funds and administrative help when moving to Israel.Besnainou and Jewish Agency Chairman Ze’ev Bielski have developed a close professional and personal relationship through the AMI-Jewish Agency link, a Jewish Agency official said.”Bielski has great respect for Besnainou’s work bringing Jews to live in Israel,” said Yarden Vatikay, the Jewish Agency’s communications director.Besnainou said he and Kantor both have the qualities necessary to govern a European organization.”But it is worrisome that Russian Jews have shown little opposition to the political choices of their leaders,” Besnainou said. “When Ismail Haniyeh, the Hamas leader, was received by the Russian foreign affairs minister, local Russian Jews did not protest. What could happen in the future? “Even more worrisome are the very strong economic and diplomatic relations between Russia and Iran. If Mr. Kantor is elected, he may have to choose between the interests of Jewish communities and those of his own country.”Responding to his critics, who say he spends too much time globe trotting, Besnainou said, “I have always moved around building relationships based on trust between Europeans, Americans and Israelis, and also with the Arab world. “I have been to Jordan and my country of birth, Tunisia, and in the future I hope to be able to pursue diplomatic relations with moderate Palestinians who are trying to work with the Israelis. I think it can be done. And I can imagine a better world for all of us.”