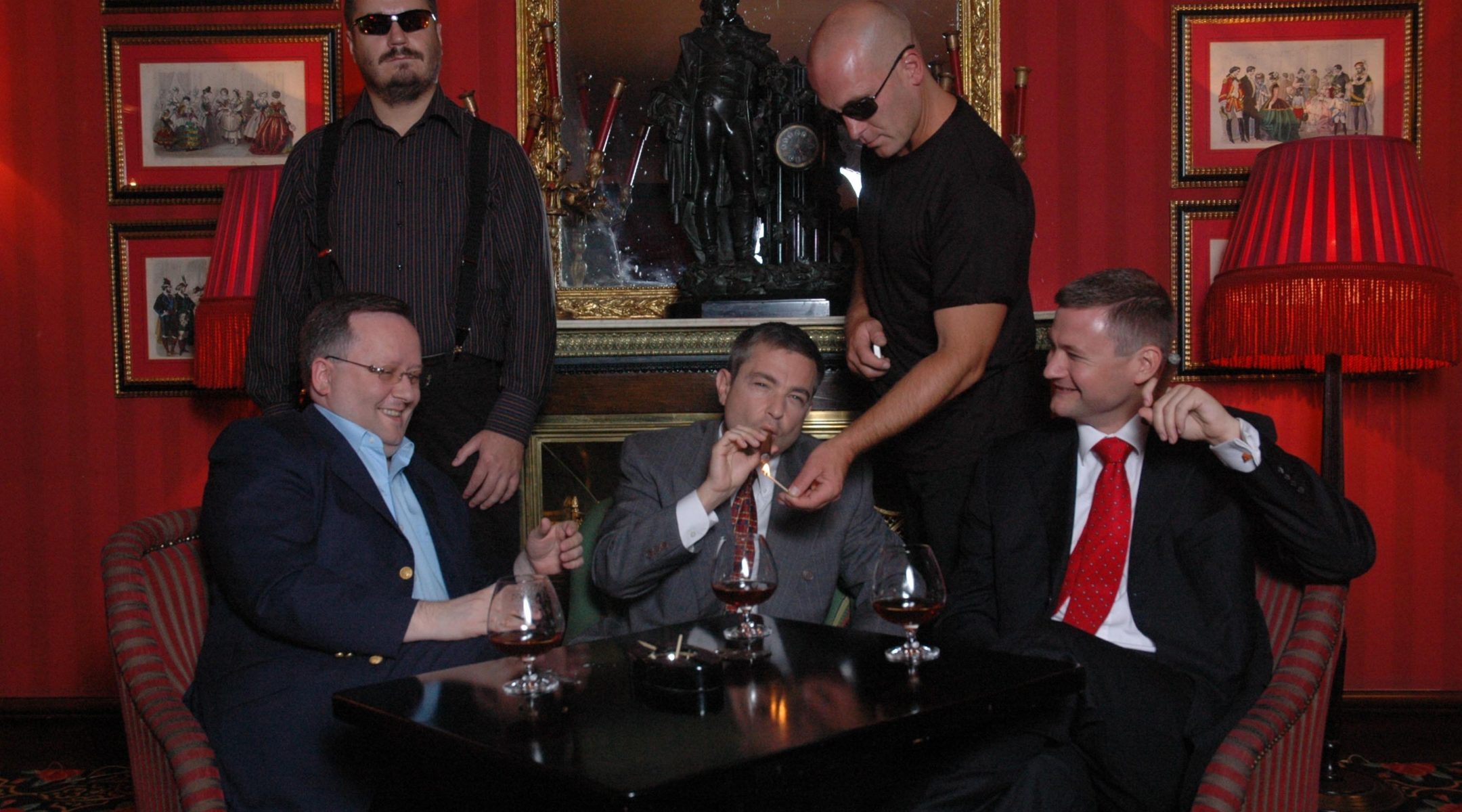 Alex Frishberg, seated at center, poses with friends dressed as characters in his semi-autobiographical novel "The Steel Barons." (Courtesy of Alex Frishberg)
Advertisement

KIEV, Ukraine (JTA) – When Alex Frishberg ditched his job as an attorney in Washington in 1991 and moved back to his native Kiev, he found that the quiet, cozy city of his childhood had transformed into a melting pot that belched out big-time racketeers and clueless bureaucrats. So he wrote about it.”The Steel Barons,” released this spring in English and Russian, is Frishberg’s semi-autobiographical novel. It tells of a young American lawyer who gets caught up with black marketeers and ex-KGB mercenaries in the maelstrom of a newly independent Ukraine, where the old rules no longer applied and new ones had yet to be invented.Frishberg was 11 when his family left Ukraine for St. Louis during the first big wave of Soviet Jewish emigration. He returned at 28 during the second, much larger exodus of Jews from Ukraine. He became part of a small community of Jews born in the former Soviet Union and raised abroad who now were bucking the outgoing tide and returning “home” for fortune and adventure.”I wrote the book from the perspective of a foreigner,” Frishberg said at a recent party launching his book in Kiev. “I had landed in a place that was very different from Washington, D.C., and I started taking notes about what was going on around me.”The book, fast paced and brimming with dark humor, “describes the lives of ordinary people and the systematic corruption they face on nearly every level,” Frishberg says in the author’s notes.Much of the book is true, Frishberg said, though he changed many of the names – per his grandmother’s advice – “so I could live a little longer.””Sasha,” the ex-KGB mercenary the American lawyer hires for protection, was based on an actual security man Frishberg met. The man made money on the side by offering protection and debt collection to rich businessmen, until a shootout blinded him in one eye.And the novel’s main female character is based on Frishberg’s wife, Lena, whom he met 10 years ago. They live in Kiev with their 3-year-old son, Daniel.Speaking to JTA after his book launch, Frishberg said his parents, both psychiatrists, wanted him to become a doctor. Instead he studied English at the University of Missouri and earned a law degree from the Washington University School of Law.”By 1991, I was on the make at Hogan & Hartson, one of the largest law firms in Washington, D.C.,” he said.But he was sure his career would be more exciting in Ukraine, where, as he writes, the “economic revolution made overnight billionaires out of well-connected individuals” while making paupers out of the rest.What he saw in Kiev was shocking, Frishberg said.In “Life on the Outpost,” one of a dozen short stories he penned since returning to Ukraine, he wrote: “These days few can afford to pay bribes to state doctors, and fewer still get medical supplies like antibiotics and disposable syringes. Each winter scores of pensioners die quietly in their apartments, completely unnoticed for lack of basic medical care. To make things worse, the authorities here do not bury people anymore; the land plots are too expensive and the caskets are out of [the] price range of most, if not all, pensioners.””Life on the Outpost ” won an English-language fiction prize from a Kiev-based agency.”The Steel Barons ” may win wider recognition for Frishberg, who freely acknowledges that he would be pleased to achieve fame as an author.For now he spends his days at Frishberg & Partners, a corporate law firm he established upon his return to Kiev. He and his colleagues have spent 15 years dealing with the countless obstacles national and foreign companies face as they try to navigate the turbulent waters of local business practices.Frishberg said that eradicating the racketeers was one of Ukraine’s biggest achievements of the 1990s. Many were forced to leave for America or Israel, he said. One notable case he cited is that of Semyon Yufa, a former waiter who swindled thousands out of their money through a pyramid scheme and fled to Los Angeles in 1998, having failed in his bid to enter the Ukrainian Parliament and thus protect himself from criminal prosecution.But like many other former gangsters, Yufa’s troubles followed him: His offices in Los Angeles were bombed with Molotov cocktails.”From what I heard, he’s been in Israel ever since,” Frishberg said.Most of the racketeers who remained in Kiev eventually were imprisoned or killed. Many did not come out alive from prison. Those who did no longer could muscle people around, and times had changed.Some of the lesser racketeers went into politics and, through their government connections, bought out state-owned enterprises ranging from soft drink plants to cement factories to regional power grids – anything they could get their hands on. The local media is full of their stories. Because steel mills are responsible for about a third of the nation’s exports, many of them became true steel barons, much like their American counterparts of the early 1900s.The 2004 Orange Revolution, when public demonstrations against electoral fraud brought President Viktor Yushchenko to office, gave hope for a better life to many people. But not all those hopes have been realized.”Unfortunately, things have not changed much,” Frishberg said. “To get the root of corruption, we have to understand its full extent.””A normal life is all we ever wanted,” he writes in “Life on the Outpost.”He writes: “Something to eat, sometimes to laugh. But the criminals have taken over the government. Billions of dollars are siphoned off per advice of the foreigners, only to end up in the pockets of the thieves who preside over us. Just look at their shiny new cars and those gold watches.”