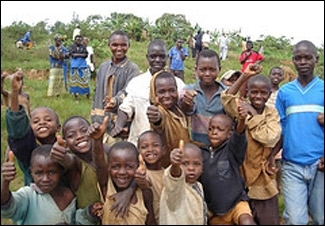 The JDC's Shalom-Agahozo Village aims to provide a structured learning environment for Rwandan orphans, many of them with HIV/AIDS. (Courtesy of JDC)
Advertisement

NEW YORK (JTA) – Anne Heyman heard a statistic nearly two years ago that would change her life: Fifteen percent of Rwandan children are orphans due to the 1994 genocide that murdered 800,000 people in 100 days.

“I couldn’t let go of this notion,” Heyman said. “There was really no future for Rwanda.”

Heyman, a non-practicing attorney born in South Africa, has spent the past two years pushing for the creation of a Jewish-sponsored institution in Rwanda to help tackle the dire situation.

Her determination is paying off – she attended a groundbreaking ceremony on Friday in Rwamagana, Rwanda, for the Agahozo Shalom Youth Village, which will serve 500 impoverished orphans.

Agahozo – Kinyarwanda for “the place where tears are dried” – is modeled after the Youth Aliyah Village of Yemin Orde, which was founded in 1953 and initially housed Holocaust orphans.

To help realize her vision, Heyman turned to the American Jewish Joint Distribution Committee. Israeli officials, including many Ethopian Israelis, have been involved in the formulation of the youth village.

“We will strive to the extent that it’s possible to create a normal environment,” Heyman told JTA in a phone interview from her hotel room in Rwanda. “As far as I know it’s unprecedented.”

The JDC is promising that the village will provide Rwandan orphans, many of them infected with HIV and suffering from AIDS, with a “safe, structured environment with a rich community life where children are exposed to all elements of parental and familial normalcy, thereby providing wholeness in the wake of destruction.”

“[Jews] have a collective experience with the Rwandans, having come through genocide,” said Will Recant, the JDC’s assistant executive vice president. “We’re very much invested in the long-term sustainable commitment to make this happen.”

Heyman said she hopes that students from all over Rwanda will come to the village and impart what they have learned to their home communities when they graduate.

“The effect of this project will be felt over the country,” Heyman said.

Recant said numerous high-ranking political and business leaders are supportive of the school, which is slated to open in 2009.

“We’ve been received at the highest levels of the Rwandan government,” he said.

Recant and Heyman both said they hope eventually to replicate the villages in other parts of Africa.

Heyman said in order to provide the greatest benefit, the JDC is trying to hire as many qualified Rwandan people and companies. But due to the shortage of qualified Rwandan teachers, she said, some positions will be filled from outside the country.

Recant, who has extensive experience leading the JDC’s nonsectarian humanitarian programs, said those not often exposed to Jews and Israelis gain a great appreciation for them when they see the work being done by Jewish organizations.

“The work itself speaks volumes,” he said. “They see we have no horns.”

“I’ve never felt more warmly welcomed as a Jew” than at any other time while doing humanitarian work, Heyman said. “There’s a tremendous sense of admiration and respect toward Israel” as they see how much the Jewish state achieved in so little time.

“This project,” she said, “really brings back Israel as being a light unto the nations.”