Hillel moves on campus in FSU 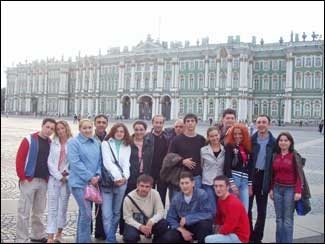 Hillel student leaders participated in a recent seminar in St. Petersburg, Russia. The seminar was one of two that heralded a new phase of Hillel activity in the region. (Courtesy of The Hillel Foundation)
Advertisement

STRELNA, Russia (JTA) – The hip-hop music was the same, as were the Israeli flags, the “boker tov” wake-up call and the close-knit, friendly atmosphere born of years spent together in Jewish summer camps.

But a recent Hillel leadership conference in this northern suburb of St. Petersburg differed from similar gatherings in North America in subtle and not-so-subtle ways.

There were few yarmulkes or other obvious signs of Jewish observance among the 200 young Jews from more than 20 Russian and Ukrainian cities who attended the four-day conference and training session, or its sister conference taking place concurrently in Kiev.

Also, many of the participants were in their mid- to late 20s, typical in a region where Hillel is not an on-campus organization but a city-centered Jewish youth club that draws teenagers as well as young married couples.

The dual conferences in late August and early September came nine months into Hillel’s new partnership in the former Soviet Union with the Jewish Agency for Israel and the American Jewish Joint Distribution Committee.

It also heralded a new phase of Hillel activity in the region, notably an aggressive move onto college campuses and the privatization of some key operations.

Avraham Infeld, president of the Chais Family Foundation and president emeritus of Hillel, told JTA that Russian society has changed tremendously even in the past five years.

“The Jewish world, too, has been changing swiftly,” he said. “Every year, more and more Jewish educational centers open their doors in every corner of this huge country. After 13 years in the former Soviet Union, Hillel is now moving from an organization of students to an organization for students.”

Aaron Goldberg, associate vice president of Hillel’s international division, said the “club” model was constructed when Hillel started working in the former Soviet Union and young Jews were eager for any connection to their Jewish roots.

“Today the situation is much more complex,” Goldberg said. “There are so many more opportunities for young Jews, and we need new models for engaging them. The club model is not working anymore. We need to come up with new programs that will work in this very competitive environment.”

Those new programs might include Hillel-sponsored book clubs or music festivals, Goldberg suggested, run in local theaters or university student centers. The important thing is that they be open to the public, Jewish and non-Jewish, “whoever wants to go,” he said.

An interesting twist is that many of the projects will be commercial. For example, in early October a Cafe Hillel will open in Odessa, Ukraine, as a business venture operated by a young Jewish returnee from Israel.

This represents something quite new for Hillel, Goldberg said. The Hillel at the University of California, Los Angeles has a privately run cafe in its building, and similar setups exist in Uruguay, but the projects being developed for the former Soviet Union will operate outside Hillel buildings, situated in the greater community rather than within a Jewish-affiliated space.

“It’s a new concept,” Goldberg explained. “But what’s more important is the mind-set that we have to think differently about how to reach Jewish students in this new reality.”

Dmitry Maryasis, Moscow’s Hillel director, has developed 15 business plans for future Hillel projects in the Russian capital, including a Cafe Hillel like Odessa’s and a youth-run Internet radio. Each would be a commercial venture with Hillel partnership.

Now he’s out looking for investors – not something a Hillel director usually does.

“We have been searching for Jewish businessmen who could contribute to these projects,” he said. “I don’t rule out approaching billionaire Arkady Gaidamak, well known for his interest in media start-ups.”

One of Moscow Hillel’s projects – a “Jewish Fashion House” that capitalizes on Russian Jews’ interest in fashion – has received a small grant from the JDC, Maryasis said.

Leia Berlin, Hillel’s newly appointed director for Russia, sees her priority for the coming year to continue expanding the organization’s field of operation and its partnership with the Jewish Agency and the JDC. She has set an ambitious goal of increasing Hillel’s regular base of participants by 20 percent annually.

“By next September we must reshape Hillel from its current closed-club model, where people gather in our premises, to a chain of open-space events,” she said. “And we are working hand in hand with the Jewish Agency in attracting young people to our events. That is a main condition set by our sponsors.”

Goldberg said the five cities where the Jewish Agency and the JDC have turned over their youth activities to Hillel for an 18-month pilot program are Moscow, Novosibirsk, Samara, Yekaterinburg and Kazan. Each of those Jewish communities has slightly different demographics, and the lessons learned in each will be applied to the rest of the region when the partnership expands late in 2008.

In Novosibirsk, for example, Hillel is experimenting with working on a college campus.

“That experience will be very valuable as we move to other cities where we want to work on campus,” Goldberg said.

This can only help Hillel activists like 25-year-old Eva Langweiler from Izhevsk, a town of 300,000 in the Udmurt republic. She and her fellow activists have run into problems trying to advertise Hillel activities on campus.

“I can’t say the rectors and deans oppose us handing out leaflets or putting up posters in the university buildings, but there is some misunderstanding from the non-Jewish students,” she said. “They suspect we are trying to get their friends involved in sectarianism. That’s why we usually invite students to Hillel by ‘bush telegraph,’ ” meaning by word of mouth.

Some participants at the Strelna convention sounded a somber tone about the commitment of young Jews. Alexandra, a graduate of a Moscow institute of higher learning who preferred not to give her last name, said: “This is my fourth time at a Hillel event.

“I love the joy, the ruach,” Alexandra said, using the Hebrew word for spirit. “But outside Hillel I see many young people who connect to their Jewish roots culturally rather than spiritually.”

“It’s the same way some teens call themselves Goths or Trekkies or whatever,” she said. It’s way easier just to wear a kipa or a Magen David than to observe the daily requirements Judaism imposes. These young people want to have fun, not burden themselves, and their approach to Judaism is no exception.”

JTA correspondent Sue Fishkoff in California contributed to this report.