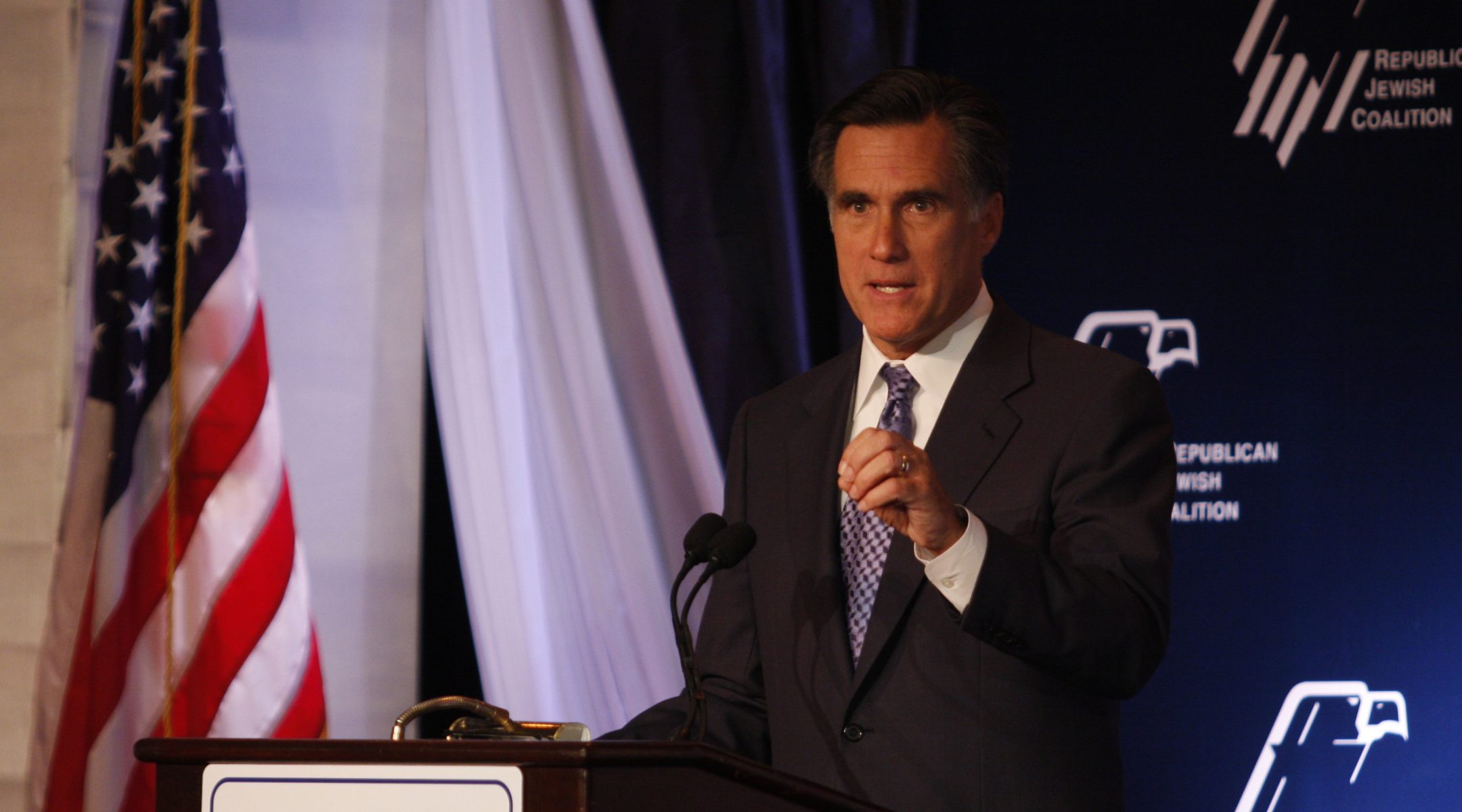 WASHINGTON (JTA) – The leading GOP presidential candidates staked out hawkish positions this week as they spoke before one of the president’s most loyal constituencies: Republican Jews.

Giuliani, the front-runner in national polls and among Jewish fund-raisers, and Romney, who leads in Iowa and New Hampshire, both promised a hard-line approach to Iran and voiced skepticism over the Bush administration’s efforts to broker a Middle East peace deal leading to the creation of a Palestinian state. Thompson also emphasized the Iranian threat. “The terror masters in Tehran and Damascus make only the most minor distinction between the United States of America and Israel,” he said. “They say that America is the Great Satan, and Israel is the Little Satan, and they both must be destroyed.”

McCain said winning in Iraq was critical not just for U.S. interests but for Israel, and declared that “the transforming struggle of the 21st century is our struggle against radical Islamic extremism.”

Brownback recently voiced support for a pro-settler initiative to extend Israeli sovereignty to the West Bank, directly undercutting Bush’s attempt to leave a two-state solution to the Israeli-Palestinian conflict as one of his legacies.

The RJC event comes at a time when the president’s approval ratings are perpetually hovering around 30 percent and many Republican constituencies, lawmakers and candidates are walking away from the Bush White House. Still, many leading Republican Jews remain fiercely loyal to the president and the most hawkish elements of his foreign policy agenda.

This summer Matt Brooks, the RJC’s executive director, and two of the organization’s other board members – Ari Fleischer, Bush’s former White House spokesman, and Sheldon Adelson, a casino mogul – joined in establishing FreedomsWatch, a group dedicated to preserving what likely has become the president’s most unpopular legacy, the Iraq occupation.

Most of the new group’s funders are well known as the RJC’s principal backers, including Mel Sembler, a former ambassador to Rome, and Richard Fox, an RJC founder.

While McCain voiced support for the Iraq invasion and said the current “surge” policy adding troops on the ground is garnering results, the Arizona senator was especially critical of Bush’s overall handling of the war. He claimed some credit for the surge strategy, noting that when he started calling for additional troops in 2004, “I was criticized by Republicans because of my disloyalty.”

McCain’s sharply critical rhetoric was a departure from the earlier part of his campaign, when he refrained from criticizing Bush administration policy. The strategy of backing an unpopular president as well as mismanagement nearly derailed McCain’s campaign in the spring, although he has recovered somewhat.

At the RJC event, McCain also implied another sharp rebuke to Bush, saying he did not trust Russian President Vladimir Putin when it came to seeking international assistance in isolating Iran until it ends its suspected nuclear weapons program.

Romney expressed skepticism about Bush administration plans to convene a peace conference next month in Annapolis, Md. Condoleezza Rice, the secretary of state, says the aim of the conference is Palestinian statehood.

“How could you possibly have a peace conference at this stage?” he asked, noting that the Palestinian Authority leadership had yet to wrest control of the Gaza Strip from Hamas terrorists. “Who would you talk to?”

On several fronts the RJC continues to stake out right-of-center positions, even as Bush and the GOP candidates have moderated their stands.

For example, in recent months the Bush administration has raised its voice on the need to deal with global warming, yet in its September-October bulletin the Republican Jewish organization mocks Democrats who focus on the issue.

The Democratic front-runner, U.S. Sen. Hillary Clinton (D-N.Y.), is criticized for asserting that “we should not hesitate to engage in the world’s most difficult conflicts on a diplomatic front” even though Giuliani has essentially made the same argument.

Still, during his RJC address, Giuliani drew sharp distinctions between himself and Clinton, accusing her of wanting to “negotiate” with Iran. Both candidates favor keeping military options on the table.

Giuliani said he was more decisive than Clinton, noting his order in 1995 ejecting Palestinian leader Yasser Arafat from a Lincoln Center concert.

He also took a subtle dig at his leading competitor in the race, Romney, who is leading in key primary states. Giuliani said that when he ejected Arafat, “I didn’t call for a team of lawyers,” a reference to a recent Romney debate answer to how he would deal with a nuclear-armed Iran.

Giuliani hinted at a split with the Bush administration, saying the time was not ripe to discuss Palestinian statehood. He said Palestinians must recognize Israel and dismantle terrorist groups.
“If they do those two things and they mean it, and time demonstrates that they mean it, then of course we negotiate,” Giuliani said.

Like McCain, Romney has backed the engagement in Iraq but been sharply critical of how it has been carried out.

In addition to standing with Bush on foreign policy, Republican Jews also have emerged as one of the few constituencies willing to touch what has become a third rail in congressional politics: Bush’s determination to roll back parts of the popular State Children’s Health Insurance Program, which reaches children from families that earn above the Medicaid threshold but still cannot afford insurance.

SCHIP has wall-to-wall Jewish community backing, but in recent weeks Noam Neusner, Bush’s former Jewish liaison, defended the president’s position in the Forward and Michael David Epstein, a senior RJC activist, did the same on JTA.

Brooks said such loyalty is natural for a president that has proven second to none in his backing for Israel.

“Bush has earned it,” he said. “Here’s a president who in very difficult and challenging times, especially on core issues like Israel, was there for us and was one of the only world leaders standing shoulder to shoulder with Israel.”

Among other instances, Bush gave Israel slack in putting down a flare-up in the Palestinian intifada in the spring of 2002 and in striking back against Hezbollah in Lebanon in the summer of 2006. Also in April 2004 for recognizing some Israeli settlements as a reality on the ground and repudiating a right of Palestinian refugees to return to Israel.

Prior to the RJC forum, Brooks told JTA that a major goal of the event was to remind “the Jewish community that it will have some important choices to make as we start to address a post-Bush environment.”

Despite the overwhelming focus on foreign policy at the RJC event, and the fact that Brownback’s longstanding rejection of legalized abortion and opposition to gay marriage places him on the opposite side of much of the U.S. Jewish community, he earned applause with comments about family values. “We’ve got to rebuild our family culture,” Brownback said. “The place to raise a child is with a mom and a dad.”

Thompson was the sole candidate asked what once was a perennial for candidates attending Jewish events: Would he pardon Jonathan Pollard, the spy for Israel convicted to a life sentence? “Not unless some new facts were brought to my attention,” Thompson replied. “He spied against my country.”

Mike Huckabee, the former Arkansas governor, was invited but could not attend the event.

Not invited were long-shots U.S. Reps. Duncan Hunter of California, Tom Tancredo of Colorado and Ron Paul of Texas. Paul was rejected because of his consistent voting record against U.S. assistance to Israel and his criticism of the pro-Israel lobby.