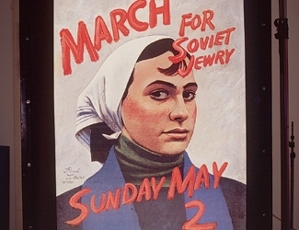 TEL AVIV (JTA) – The ink has begun to fade on the long, scroll-like piece of paper on which 300 Jews from the Soviet Union bravely penned their names and addresses to demand permission to move to Israel in the 1970s.

At the time this seemingly innocuous action put them at risk of state harassment at best and years condemned to prison camp at worst.

The scroll is among hundreds of documents on display in a new exhibit at Beit Hatefusoth, the Nahum Goldmann Museum of the Jewish Diaspora in Tel Aviv. The exhibit opened Tuesday to commemorate the 40th anniversary of the Soviet Jewry struggle.

“There is no end to the stories here,” said Rachel Schnold, the exhibit’s curator. “People paid a very heavy price.”

The unique display, titled “Jews of Struggle: The Jewish National Movement in the USSR, 1967-1989” presents historic perspective to a struggle that mobilized Israel, Soviet Jews and the Jewish Diaspora in an unprecedented show of unity.

It is one element of the Diaspora Museum’s recently launched $50 million campaign to revitalize the institution, which fell on hard economic times in recent years. The goal is to modernize the museum and its message of Jewish unity for a 21st-century audience, upgrading exhibits with interactive displays, digitized archives and other multimedia platforms, explains Hasia Israeli, director general of the museum.

“We are looking for those stories that have a message and that strengthen the sense of belonging and what it means to be part of the Jewish people,” Israeli said.

As part of its revitalization plan, the museum also has launched an educational institute. The International School for Jewish Peoplehood Studies develops curricula, trains teachers and offers educational programming for students from around the world.

The school is supported by the Nadav Fund, a charitable endeavor founded by Russian-Israeli billionaires Leonid Nevzlin, Vladimir Dubov and Mukhail Brudno, all of whom made their fortunes in the oil business. Nevzlin is the chairman of the museum’s board of directors.

Israeli says the exhibit on Jews from the USSR is one of the finest examples of “Jews taking responsibility for one another — a story of wanting to be Jewish.”

The familiar chant “Let my people go” — the rallying cry at protests across the world — echoes from posters covering the exhibit’s walls. Among the posters are placards once held high in demonstrations from Mexico City to Moscow.

The movement to liberate Soviet Jews was a grass-roots effort involving housewives, students and community leaders who stood shoulder to shoulder sending letters and lobbying governments to take a stand. The exhibit reflects this, with photos of demonstrations big and small, from college students dressed in prison uniforms to the mass rally in 1987 at the Washington Mall.

Some of the posters might look familiar to Diaspora visitors, such as one from the 1980s calling on New York Jews to join a Solidarity Sunday where marchers would make their way from City Hall to Battery Park, in lower Manhattan, demanding freedom for their brethren in the Soviet Union.

Doreen Gainsford, a founder of the 35’s Women’s Campaign for Soviet Jewry, said the exhibit is meant to show people what really went on inside the struggle.

“I don’t think Jews in the Soviet Union realized, and I don’t think Jews around the world realized the real struggle that took place — that this was about a few people with the courage, force and motivation that gave them incentive to do this despite the threat of the Gulag,” she said. “There were a few people who stood up, and what we did is to respond to them.”

Gainsford said the exhibit reflects the sense that “this is a piece of Jewish history, and it was people power and it was Jews standing up and fighting for themselves.”

Included in the exhibit are postcards Sharansky received from his wife, Avital, while in prison – a censor left thick lines in blue marker across half of the sentences. Avital Sharansky’s campaign for her husband’s release made Natan Sharansky a household name around the world.

Notebooks are filled with Hebrew words that dissidents in prison used to study furtively, along with the samizdat — the underground publications put out by Soviet Jewish activists — they read. It was dangerous and logistically difficult to make copies of censored works like poems by the Hebrew poet Hayyim Nahman Bialik. Even Leon Uris’ “Exodus” was revered as something akin to the Bible by young Zionist activists.

This year marks 40 years since the struggle for Soviet Jewry began to take form as a real movement, inspired by the Israeli victory in the 1967 Six-Day War. As the exhibit shows, the roots of the struggle began in the immediate aftermath of World War II, when Jews in the Soviet Union were made to feel like outsiders.

A 1957 youth festival held in Moscow and attended by an Israeli delegation was a key moment in the formation of the struggle. Soviet Jewish youth who came and mingled with their Israeli counterparts were left deeply inspired by the interaction, the exhibit demonstrates, but because the Soviet government did not allow contact between its citizens and foreigners, several of the young Jews were arrested.

Tina Brodetsky was among them. She spent the years between 1958 and 1961 in Siberia for her crime.

“I am very proud of my past,” Brodetsky, who now lives in Jerusalem, told JTA. “I always lived without compromise.”

Brodetsky said she hopes the exhibit will help educate young Israelis, including immigrants from the former Soviet Union, about the struggle she and her peers helped drive. Like many other former political prisoners and refusniks, Brodetsky expresses concern over what she calls post-Zionism and a lack of ideology among Israel’s leadership and people.

“Our whole lives we struggled and what did we achieve? Where have we gotten? That remains a major question mark,” she said.

Natan Sharansky, the most famous of all the former Soviet Jewish dissidents and the head of the Committee on the Fortieth Anniversary of the Soviet Jewish Struggle for Freedom, was the main speaker at the exhibit’s opening Tuesday.

Writing in the exhibit’s catalog, Sharansky recounted the long and painful path to liberty made possible by the combined effort of the Soviet Jews themselves and Jews worldwide.

“May the story of Soviet Jewry teach today’s Jewish people,” Sharansky wrote, “that the first step in the vital mission of Tikun Olam, repair of the world, must begin with a belief in the responsibility and mutual concern all Jews must share for one another and together for their state.”