The Soviet Jewry campaign: A timeline 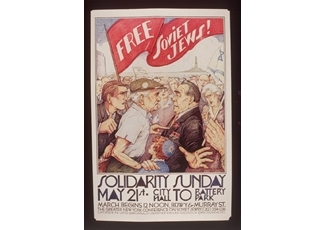 May 1, 1964: 1,000 Jewish students protest outside the Soviet Mission to the United Nations in New York, the first such street demonstration on behalf of Soviet Jewry.

1971: Following the Leningrad Trial of December 1970, which handed down harsh sentences to a handful of refuseniks who tried to hijack a plane to Israel, 27 American Jewish organizations come together to create the National Conference on Soviet Jewry (NCSJ), the successor to the AJCSJ. Together with the Union of Councils for Soviet Jews (UCSJ), it launches a major advocacy effort for Soviet Jewry in Washington. Meanwhile, the Greater New York Conference on Soviet Jewry begins holding “Solidarity Sundays,” mass demonstrations on behalf of Soviet Jews.

January 1975: The Jackson-Vanik Amendment to the Trade Bill of 1974 restricts benefits to non-market countries that limit free emigration, an open challenge to Soviet restrictions on Jewish emigration. Human rights are now tied to U.S. trade policy.

1977-1979: Jewish emigration from the Soviet Union inches upwards again, then stops almost entirely after the Soviet invasion of Afghanistan in December 1979. Altogether, about 200,000 Soviet Jews left for Israel this decade.

Dec. 6, 1987: 250,000 people gather on the National Mall in Washington to demand freedom for Soviet Jews, the largest Soviet Jewry rally in history, on the eve of a summit conference between U.S. President Ronald Reagan and Soviet Premier Mikhail Gorbachev.

Late 1988: Soviet restrictions on Jewish emigration ease. By 1989, the doors are opening wide. Half a million Jews leave in two years.

August 1991: The Soviet Union is formally dissolved. By the end of the decade, more than 1.3 million Jews have left for Israel, the United States, Germany and elsewhere.