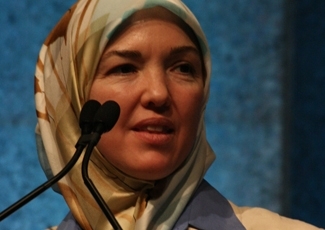 SAN DIEGO (JTA) – Rabbi Eric Yoffie earned only a handful of chuckles in his Saturday sermon to the biennial convention of the Union for Reform Judaism, but one of the heartiest came near the end of a plea for Reform Jews to support state initiatives on health insurance.

As a final point, Yoffie noted that congregations don’t always provide the most healthful food options at synagogue functions, prompting the 6,000 in attendance to burst out laughing.

“I guess we have the answer on that one,” Yoffie observed.

Most of Yoffie’s speech was no laughing matter, calling for more dialogue with Muslim Americans and greater support for Israel in advance of its 60th anniversary. But the centerpiece was urging Reform Jews to revive Shabbat observance.

Yoffie was unflinching in diagnosing the problem: The prevalent bar mitzvah culture in Reform synagogues has made Shabbat morning services more about worshiping a child than worshiping God.

Yoffie’s solution: more Shabbat observance and a reclamation of Shabbat morning services from the bar mitzvah crowd, a call that’s sure to prompt the expected round of comments that Reform is becoming more traditional.

Perhaps in anticipation, Yoffie promised that the new Shabbat initiative would not result in a return to “neo-frumkeit” and the movement would not attempt to dictate personal practice. That line didn’t earn any laughs, but it did produce scattered applause.

Muslim dialogue
One of the more heavily promoted sessions of the biennial was an appearance by Dr. Ingrid Mattson, president of the Islamic Society of North America.

A Canadian-born convert to Islam and the society’s first female president, Mattson is something of a trailblazer. She showed that in August when she invited Yoffie to become the first major Jewish leader to address her organization, an umbrella group of eight Muslim organizations.

Mattson spoke at the biennial’s final plenary on Sunday. Organizers must have expected a paltry showing because the hall was smaller than the one used for the major plenaries, but the room was packed nonetheless.

Her faced swathed in an Islamic headscarf, Mattson spoke in a clipped and sober tone about the Muslim constituencies in North America she represents and their readiness to engage in dialogue with Jews. Her society and the URJ are launching a series of dialogues that are pairing 10 mosques and synagogues across the country.

Though she never paused for applause, the URJ crowd could barely suppress their impulse to cheer Mattson. They applauded when she spoke about the Muslim responsibility to confront the terrorists and extremists in their midst. They stood when she promised to confront any Muslim who denies the truth of the Holocaust. And betraying the crowd’s liberal inclinations, they cheered when she said it was possible to support the Palestinians without being anti-Jewish.

“It is our responsibility to reclaim Islam from the terrorists and the extremists,” Mattson said. “That is why American Muslims have been public in our views on terrorism and extremism in the name of our religion.”

Mattson said the Islamic Society had published the fatwas, press releases, articles and books denouncing Muslim extremism. She also compared negative caricatures of Muslims in the media to the demonization of Jews by Nazi propaganda.

Though she stressed she does not fear a Muslim Holocaust in America, Mattson believes the stereotyping of Muslims accounts for the failure of most Americans to protest waterboarding and other forms of torture against Muslim detainees.

Friedman honored
Of all the hundreds of songs sung in the course of the five-day biennial, more came from the inspiration of one composer than any other. Debbie Friedman’s melodies, many combining traditional liturgies with English lyrics, have become deeply embedded into the movement’s summer camps and worship services, and on Saturday night she was honored with the first Alexander M. Schindler Distinguished Service Award.

For a woman who figures so prominently in the fabric of Reform worship, Friedman herself had a relatively minor role in the ceremony. A tribute concert, in which several of the movement’s leading musical lights performed her songs, and a video in which movement leaders celebrated her contributions – Yoffie called her a “treasure” – preceded a very short speech by Friedman herself. At the end of the evening, Friedman performed two songs.

Friedman in recent years has suffered from a debilitating illness that causes her muscles to twitch uncontrollably. On stage at the biennial, she appeared to have aged considerably since the youthful-looking woman singing in the video just a few years before.

The evening’s most moving moment came when Rabbi Daniel Freelander, the URJ’s vice president, led the audience in singing “Mi Shebeirach,” Friedman’s iconic prayer for healing. Friedman, her eyes moist, sat silently on the stage. For the prayer’s final lines, the musical accompaniment fell away, and it was just 6,000 Jews singing a capella to the woman who had given them the melody.

Political reformers
If it’s true what they say about mixing religion and politics, no one seems to have told the Reform movement. There was politics galore at the biennial, mostly of the liberal variety.

At the opening plenary Dec. 12, the opening day of the biennial, Berkeley Law Professor Goodwin Liu – standing in for an absent Susan Estrich – delivered a scathing indictment of the U.S. Supreme Court, which he described as the most conservative in 30 years. If a Republican is elected in November and appoints a justice – John Paul Stevens, a liberal, is 87 years old – Liu predicted we are “destined for a period of constitutional dark ages.”

The message seemed clear: Elect a Democrat at all costs. Reform leaders, perhaps mindful of nonprofit laws that prevent them from endorsing candidates, vigorously denied that was their intention.

“Absolutely not,” Yoffie said in an interview with JTA in his hotel suite overlooking San Diego bay.

Separately, Rabbi David Saperstein, the movement’s man in Washington, told JTA that the question of judicial nominations was too complex to be reduced to a partisan issue. What matters, Saperstein said, is not which party nominates the justice but what that justice believes in terms of respect for court precedent.

Another well-attended session featured Saperstein with the Rev. Jim Wallis, a liberal evangelical Christian leader and the author of “God’s Politics,” and Albert Vorspan, a former director of the URJ’s Commission on Social Action.

Vorspan in a powerful address blasted the Bush administration for preventing Middle East peace, fomenting “nativist hostility” to new immigrants, tolerating torture at Guantanamo and damaging America’s standing in the world so severely it will take generations to overcome.

Vorspan concluded by encouraging his audience to be “nudniks for conscience.” His audience, seemingly unable to stay in their seats, gave Vorspan – what else? – a standing ovation.

Reform Jews clearly don’t need to be told to elect a Democrat. What they don’t know is which Democrat to elect.

Most of the biennial delegates claimed to be undecided among the candidates. The most important issue for most of those interviewed by JTA seemed to be the question of who would give the Democrats the best chance of winning. But even with the primary season about to start, few people had settled on the answer.