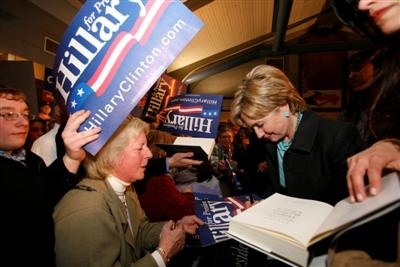 U.S. Senator Hillary Clinton campaigns in New Hampshire, where she won the Democratic primary on Jan. 8. (Courtesy of Hillary for President)
Advertisement

NASHUA, N.H. (JTA) – New Hampshire voters confirmed their reputation for independence Tuesday night, defying polls that had predicted a resounding defeat for the presidential candidate most favored by American Jews.

U.S. Sen. Hillary Rodham Clinton (D-N.Y.), who earned top favorability marks in a recent survey of American Jewish opinion, had gradually been overtaken by U.S. Sen. Barack Obama (D-Ill.) in the days after his stunning victory in the Iowa caucuses, with some predicting a double-digit defeat that would have left her presidential prospects in peril.

But on Tuesday night, she edged Obama in a race so close that both campaigns were exuding confidence and promising to continue into the South and West, and on to states with significant Jewish populations.

“It is very exciting,” Ann Lewis, a senior adviser to the Clinton campaign with a key role in outreach to the Jewish community, told JTA. “We got a lot of happy volunteers. Now they’re celebrating. This is a pretty good moment.”

On the Republican side, the victory by U.S. Sen. John McCain (R-Ariz.) ratcheted up the pressure on another Jewish favorite, former New York City Mayor Rudy Giuliani, whose hopes now hinge on the Florida primary Jan. 29.

With Democrats and Republicans both picking different winners in Iowa and New Hampshire, it seems increasingly likely that the nation could again end up turning its collective eye to Jewish voters in South Florida.

The Sunshine State, which boasts the country’s third largest Jewish population behind New York and California, is poised to provide a major momentum boost as the only state scheduled to hold a primary on Jan. 29, as well as the last to vote before Super Tuesday a week later.

“Where does the Jewish vote matter?” one Democratic consultant mused. “Florida.”

In addition to New York and California, Feb. 5 will feature primaries in several other states with sizable Jewish populations, including New Jersey, Illinois, Georgia, Connecticut and Arizona. On Super Tuesday, 23 states with about two-thirds of the country’s Jewish population will hold primaries.

Giuliani’s so-called “late state” strategy, in which he neglected early states in favor of delegate-rich later states where he believed his chances to be better, was being increasingly called into question this week as his numbers began to slip in Florida.

Even the existence of the strategy was challenged by ABC News, which reported that Giuliani had held more events in New Hampshire than any Republican candidate other than former Massachusetts Gov. Mitt Romney. The Giuliani campaign disputed the figures.

A onetime front-runner in Florida, Giuliani placed fourth in a recent poll that pegged former Arkansas Gov. Mike Huckabee as the winner.

After winning in Iowa, Huckabee placed third in New Hampshire, a result the candidate spun as better than the fifth-place finish the polls had predicted. The Florida poll had Romney in second and McCain in third.

“There’s been no McCain activity in the state of Florida at all,” said Fred Zeidman, a longtime ally of President Bush from their Texas days and a McCain supporter. “He hasn’t had the money to do it. He had to bet on the early primaries to establish a position. He’s just starting to make a move down there. I think that John McCain, with momentum, can make quite a showing in Florida.”

In a sign that Jewish Democrats now see McCain as the man to beat, the National Jewish Democratic Council released a fact sheet that sought to portray McCain as an extremist and predicted he would turn off Jewish voters in a general election.

The NJDC sheet noted his zero rating from the pro-choice group NARAL, his support for the teaching of intelligent design and his statement a few months ago that America might be more comfortable voting for a Christian presidential candidate than a non-Christian one.

“Today’s John McCain has allowed himself to be used as a mouthpiece of the far right who insists America is a Christian nation,” said NJDC Executive Director Ira Forman. “He continues to oppose a woman’s right to choose and has defended disastrous Bush administration policies. Given his record, he will have a very difficult time with Jewish voters in November.”

Obama, meanwhile, enjoyed the support of several prominent Jewish figures in New Hampshire, including the state’s first Democratic representative, Paul Hodes, and Concord businessman Gary Hirshberg. But in a state with only 14,000 Jews, those voices weren’t enough to propel Obama to victory.

“I have been in politics for 40 or more years, and I have been waiting a long time to follow a candidate who actually inspires me,” said Martin Gross, a Jewish New Yorker by birth and a former mayor of Concord. “And this one does.”

In voting Tuesday night, Clinton finished with 39 percent to 36 percent for Obama. On the GOP side, McCain topped Romney, 37 percent to 32 percent.

In interviews around New Hampshire in the days leading up to the primary, Clinton and Obama supporters generally agreed that the policy differences between their preferred candidates were minimal at best. Echoing the statements of the candidates themselves, supporters touted Obama’s capacity to inspire and unite and Clinton’s ability to lead and govern.

Hirshberg, the president and CEO of the organic yogurt company Stonyfield Farm, told JTA on Monday that the decisive factor for him was the way Obama had spoken to his children during a visit to Hirshberg’s home.

“What I noted that night, my kids were asking him questions, and he spoke to them like you and I are talking right now,” Hirshberg said. “Not even the remotest amount of condescension. He looked them in the eye. I thought this would be a dream to have a human being like that in this post.”

Joan Reische, another politically active Jewish New Hampshire resident, said Clinton did “an outstanding job” during a visit to her home last year. But in the end Reische and her husband, Alan, made an early decision to support Obama despite not even knowing at the time where he stood on certain issues.

“As our 41-year-old son said to us, at that point even if we didn’t know where he fell on specific issues, his general mind-set would be such that the chances were very strong that he would come down in the right position on issues we care about,” Reische said.

The emphasis in the Obama camp of inspiration over issues provided an opening for Clinton to recast the decision facing voters in more favorable terms.

In her victory speech Tuesday night, she said she had listened to New Hampshire voters and “found my own voice.” She also framed the choice in the campaign as one between talk and action, speaking of the need to “deliver” on the American dream – a subtle but pointed slap at Obama’s lofty rhetoric.

Clinton’s emphasis on experience would seem to have the potential of playing well among American Jews, who according to a survey conducted in November by the American Jewish Committee find her to be the most favorable candidate.

Some political observers speculate that the wide margin is attributable to strong Jewish support for the Bill Clinton administration and to Hillary Clinton’s seven years as a New York senator, during which she has invested a great deal of time reaching out to Jewish organizations.

“As the campaign field narrows, it is easier and easier to make that comparison” between Clinton and Obama, said Lewis. “More and more people see the strong differences between what these candidates offer. We’re really in a two-person race at this point.”