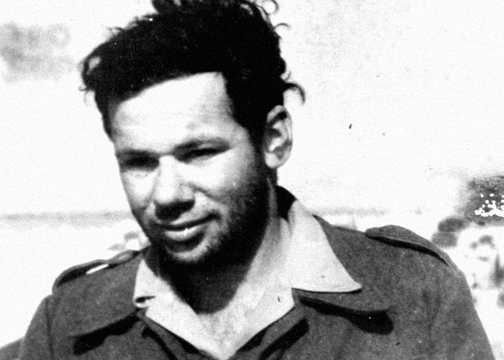 Tom Tugend in 1948, serving with the Israel Defense Forces in the Negev shortly after the founding of the state. (Courtesy of Tom Tugend)
Advertisement

From the corner of our eyes we catch the newspaper headlines: “U.S. RECOGNIZES ISRAEL” screams the Examiner, in type usually reserved for the latest axe murder or Hollywood divorce.

Israel. We slowly formulate the name on our tongue, roll it around, test its flavor for the first time.

We buy up every paper on the newsstand – the San Francisco Chronicle, the News, the Examiner and the Oakland Tribune – an expenditure that would become a daily habit.

Each paper carries the identical releases from the wire services, but there is the hope that an editor or commentator might add a few more words about Israel, fill in background or analyze the situation.

We forget about catching the train and slowly walk down Market Street.

The all-night Newsreel Theatre flashes its attractions: LATEST PICTURES FROM PALESTINE – SEE WHY THE JEWS ARE FIGHTING FOR THEIR COUNTRY.

The newsreels are quite old, something about the first Jewish settlements in the Negev. We applaud enthusiastically.

In the theater lobby, a teletype machine spews out the latest news flashes, “In a simple ceremony, Prime Minister David Ben-Gurion …”

During the next weeks we become restless. We can’t concentrate on our work, are useless for our studies. When we aren’t squatting beside the radio, we are scanning the latest newspapers. When we aren’t writing letters to the editor, we are cabling our congressman to demand an immediate lifting of the U.S. arms embargo on Israel.

Slowly, at first unconsciously, our attitudes as Jews change.

We have never been ashamed of our Jewishness, but many of us were indifferent to it. Few of us belonged to a Zionist organization. Of course, we applauded the accomplishments of those in Palestine and perhaps gave a little money to help them.

But now we gradually begin to speak of this as our fight, our defense and – perhaps – our future.

I meet the shop foreman from an old summer job. What does he think of the Jews’ fight in Israel? A lifelong anti-Semite, he scratches his head, hesitates and admits reluctantly, “Christ, I wouldn’t have believed it.”

A friend, Jewish and anti-Zionist, assesses the new situation.

“Our people in Palestine have done more to eliminate anti-Semitism in the last six months of fighting than we were able to do in the previous 2,000 years of producing the greatest doctors, the greatest scientists and the greatest philosophers,” he says.

We sadly shake our heads at the immaturity of the human race and tune in to the next radio broadcast. “Forces of the Israeli army have taken enemy positions …”

We walk out of the room, our bodies a little straighter, our chins a few inches higher than before.

(This article was written in late May 1948, when Tom Tugend, then 22, was a student at the University of California, Berkeley. It was first printed in November 1948 in the Soldiers Bulletin, published in Israel for English-speaking volunteers in the War of Independence.)