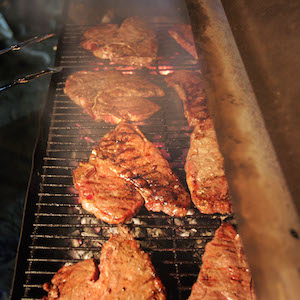 Kosher steak was the appetizer of sorts at the world’s largest barbecue.

Uruguay on Sunday set a world record for the largest barbecue when 1,200 chefs grilled nearly 26,500 pounds of meat on a star-shaped grill nearly a mile long.

Officials worked with Chabad-Lubavitch of Uruguay to make one kosher steak before the rest of the non-kosher steaks were cooked. Chabad said the grill had never been used, so there was no problem with kashrut.

The event was used as publicity to sell Uruguayan beef, according to Chabad. Uruguay wanted to include kosher meat as part of its showcase, as the nation exports more than 24 million pounds of kosher meat annually to Israel, the United States and elsewhere.