TEL AVIV (JTA) – It’s mid-afternoon and Michael Dahan is buying food for his first meal of the day. With rising food prices compounding his already dire economic situation, it has become his habit to skip meals, he admits.

“What can I do?” the unemployed 49-year-old says with a shrug, holding the small carton of milk he has just bought at a grocery store in the rundown Shapira neighborhood of south Tel Aviv. “I hardly have anything to get by on once I’ve paid rent and utilities.”

A block away, on a sidewalk strewn with cigarette butts and plastic bags, Maria Arnov, 28, an immigrant from Latvia and mother of two, says food prices have changed the way she shops. Arnov goes to the store less often and cuts corners wherever she can, like buying cheaper frozen meat and not buying the type of rice her family favors because its price has doubled in the past three months.

Israel, like many parts of the world, has seen food staples such as meat, rice and vegetables rise significantly. Its poor, already struggling to make ends meet, have been hardest hit – along with the nonprofit groups that serve them.

Although it is rare for Israelis to go hungry, food insecurity is a growing problem in their nation as traditional social safety nets fall short and nearly a quarter of Israeli families find themselves subsisting on less nutritious diets than before.

Many of the nonprofit groups that deliver food to the needy say they have been reeling from the one-two punch of rising prices and a sinking dollar.

In Israel, groups that rely in large part on funds raised in the United States have been forced by the dollar’s plunge to cut back on services, sometimes reducing the number of families they serve by as much as 40 percent.

In Beersheva, the social assistance group Beit Moriah has had to reduce the number of food packages it delivers to families every month to 200, down from 500 last year.

At From the Heart, an organization in Rishon LeZion that runs a food distribution project called Lev Chesed, volunteers are overwhelmed by requests they cannot meet.

“We have several hundred people on our waiting lists, but it’s not financially possible to help them,” said Ronen Ziv, the director of the group, which provides food packages to 700 families per week. “We have no government assistance.”

With budgets becoming leaner, government officials for the first time are pushing to develop a policy to combat food insecurity. The first-ever interministerial report on the subject was completed recently, and legislation is pending in the Knesset for a new council on food security to be created to develop coordinated policies to tackle the problem.

The ministerial report, which is pending Cabinet approval, recommends increasing annual state funding for nutrition and food insecurity to $10 million to $15 million from the current $1 million.

“There needs to be an appropriate range of government responses, from funding food assistance programs, to reducing state Value Added Tax on staple foods, to ensuring that having basic foods is seen as a right for all Israelis,” said Batya Kallus, the director of the Forum to Address Food Insecurity and Poverty in Israel.

Established last year, Leket is based on the model of U.S. community food banks. It attempts to coordinate and streamline the efforts of many nonprofit food agencies. In the past decade the number of such groups has grown to about 400, which collectively distribute some 20,000 tons of food per year.

“What we have been seeing in purchasing food to be donated is that people are paying a huge range of prices, from rock bottom to retail,” Kallus said. “We have tried to make sense of that by creating a central purchasing division where organizations can come to Leket and we offer them a wide basket of foods they can purchase that we offer at the lowest possible prices.”

In a 2003 study on food insecurity in Israel commissioned by Leket from the Myers-JDC-Brookdale Institute, researchers found that some 22 percent of Israelis are unable to provide for their basic nutritional needs on a daily basis.

A father of eight in Jerusalem whose family has slipped into poverty after emigrating from the United States many years ago says he lives with food insecurity every day.

“When there is food we are happy, when there isn’t we are not,” said the man, who asked not to be identified. “It’s not a matter of decision-making. When there’s just no money, there is no food.”

He says there are days when the family goes without food.

Ido Nachum, a spokesman for Israel’s welfare ministry, says he hopes the interministerial report’s recommendations will be adopted, including increased state investment and oversight of nonprofits, the establishment of the national council on food insecurity, expanding a hot lunch program for schoolchildren and ensuring government subsidies for those who cannot afford to feed their families adequately.

Far from the corridors of national decision-making, Dahan, the unemployed man in south Tel Aviv, shuffles away with his small bag of provisions, hoping for better days. 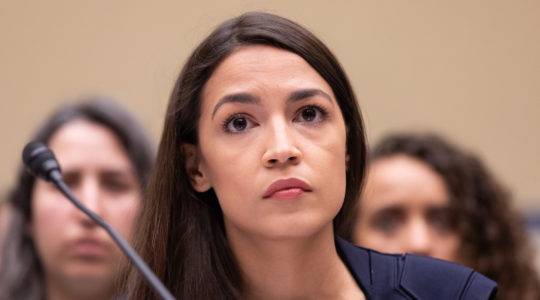