Can Lieberman ease friction rather than sharpen it? 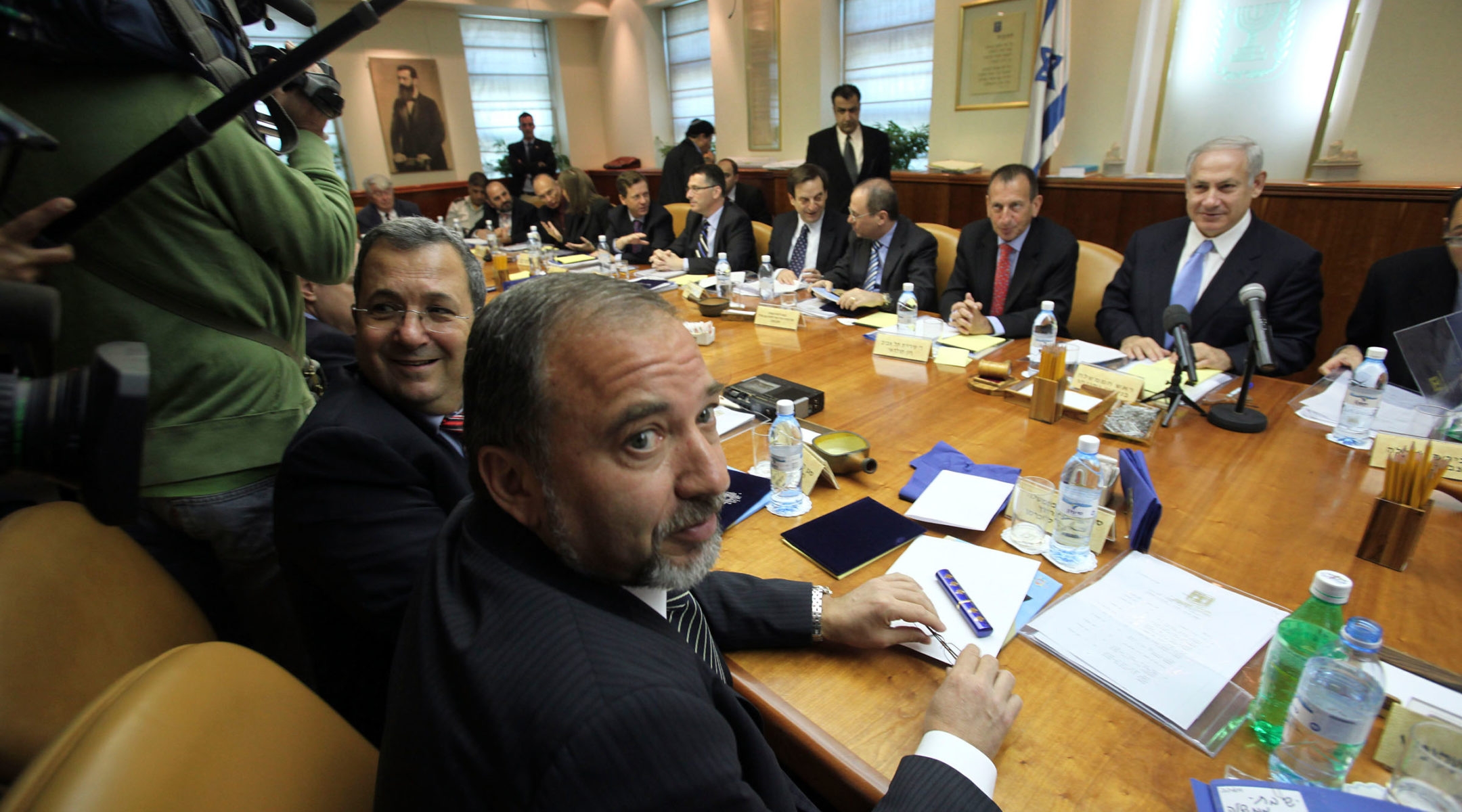 Foreign Minister Avigdor Lieberman, foreground, seen at a Cabinet meeting on April 26, 2009, has been at odds with Defense Minister Ehud Barak, to his left, over negotiating with Syria. (Yossi Zamir / Flash90 / JTA)
Advertisement

JERUSALEM (JTA) — When he left Israel for his first official overseas trip this week, Foreign Minister Avigdor Lieberman faced both diplomatic challenges and a personal test.

The main aims of Lieberman’s five-day trip to Italy, France, the Czech Republic and Germany were to push the Europeans on two points: not to link progress on the Palestinian track to a planned upgrade of the EU’s relations with Israel, and to tighten sanctions against Iran if President Obama’s attempt at dialogue with Tehran fails.

But it also was a personal test for the controversial foreign minister. After a campaign in which Lieberman was painted as an ultranationalist by opponents who compared him to some of Europe’s far-right political figures, he has come under intense media scrutiny.

In Europe, Lieberman wanted to come across as a serious player, not a loose cannon, and the European stage provided an opportunity to correct initially unfavorable first impressions.

In an interview with the Israeli daily Yediot Achronot on the eve of the trip, Italian Foreign Minister Franco Frattini said he would advise Lieberman to lower the tone of his public comments and help build a constructive atmosphere. Frattini indicated that Italy is ready to help Israel overcome its difficulties in Europe, but “needed something from Israel to work with.”

Over the past few weeks, differences with Europe have drawn sharp responses from Israel. Netanyahu has urged the Europeans not to try to dictate terms to Israel and to give his new government the time it needed to complete its foreign policy review before drawing conclusions.

Lieberman’s Foreign Ministry took a blunter tack. Rafi Barak, head of the ministry’s European desk, summoned key European ambassadors last week and warned that if Europe did not lower the tone of its criticism of Israel, it might lose influence in the peace process.

Barak also asked on what authority Benita Ferrero-Waldner, the EU commissioner for external relations, had threatened to freeze the planned upgrade in ties with Israel, since no such decision had been taken by the European Union.

After Frattini met with Lieberman on Monday, the Italian seemed to have adopted Lieberman’s message: Europe, he said, should move closer to Israel or risk being frozen out of the peace process. For his part, Lieberman said Israel would take the initiative, without slogans or declarations, to bring a stable peace to the region.

It was a different tone from the past few weeks, when the new foreign minister offered a stream of hawkish and sometimes puzzling comments.

In his first day on the job, Lieberman declared that those who want peace should prepare for war, and that the Annapolis process with the Palestinians was no longer relevant. Then he came out against the 2002 Arab Peace Initiative, describing it as a blueprint for Israel’s destruction. Only later did Lieberman explain that he was referring only to the paragraph on the right of return to Israel of Palestinian refugees.

In an April 21 interview with the Russian newspaper Moskovskiy Komsomolets, Lieberman said the United States would launch new Middle East initiatives only if Israel wanted them.

“Believe me, America accepts all our decisions,” he was quoted as saying.

In the same interview, Lieberman said Moscow’s influence in the Middle East was underutilized and that he hoped to redress the balance.

“Russia has special influence in the Muslim world, and I consider it a strategic partner that should play a key role in the Middle East,” he said. “I have argued for some time that Israel has insufficient appreciation of the ‘Kremlin factor,’ and I intend to bridge the gap.”

After years of building up the Iranian menace, Lieberman insisted in the interview that the biggest threat to Israel was not Iran but Pakistan and Afghanistan. And asked what Israel could do in the face of the threats to world peace, he said Israel’s task was to bring the United States and Russia closer together.

A few days later, Lieberman caused another diplomatic storm when he told Austria’s Kleine Zeitung newspaper that “To this day, Syria gives refuge to terrorist organization headquarters and supports the Iranian nuclear program. Therefore I cannot see Syria as a genuine partner for an agreement.”

Then he spent the next day explaining that he was ready for talks with Syria “this evening,” as long as there were no preconditions.

Barak insisted in a Cabinet meeting that detaching Syria from the Iranian axis was a supreme Israeli interest and that negotiations with Damascus should in no circumstances be ruled out.

Barak advocates a regional approach to peacemaking: parallel negotiations with the Palestinians and the Syrians, with backing for both tracks from the United States and the Arab world. Barak argues that this approach would help the two tracks energize each other, and that the regional framework would help isolate Iran.

The key question is where Netanyahu stands in the foreign policy argument between Lieberman and Barak.

Netanyahu confidants say the fact that he didn’t censure Lieberman for any of his remarks does not mean that he agrees with them or that he is not in control of foreign policy. They say that after the policy review is complete, there will be one foreign policy and Netanyahu will be calling the shots.

The early signs are that the policy may be more peace-oriented than expected, and that Lieberman will go along with it.

Ahead of an early May meeting with Obama, President Shimon Peres said he would tell the U.S. leader that in Netanyahu he would have a partner for “historic peace moves.”

When Netanyahu and Obama meet later this month, the Israeli leader is expected to offer the U.S. president conditional acceptance of the two-state solution to the Israeli-Palestinian conflict. The appointment of someone who strongly backs the two-state model as Israel’s new ambassador in Washington, Michael Oren, suggests that is the direction Netanyahu will take.

It was Netanyahu’s initial reluctance to make such a commitment that led to a strain in relations with Europe, sharp comments in support of two states by U.S. officials and threats by some senior European officials to freeze the planned upgrade in ties with Israel.