Politics abounds on pope’s mission of peace to Israel 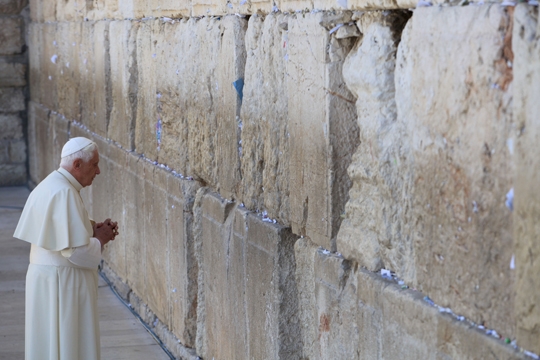 JERUSALEM (JTA) — Coming as a self-described “pilgrim of peace,” Pope Benedict XVI vowed to fight anti-Semitism and called for a Palestinian state in the moments after his arrival in Israel for a five-day visit.

But controversy has marked the visit this week from the start, as the pope’s supposedly non-political trip abounds with politics and his hosts in Israel and the Palestinian Authority parse his words with nearly Talmudic precision eyeing support for their positions.

On Monday, his first day in Israel, the pope was criticized for not being contrite enough about the Holocaust on behalf of the Catholic Church. Later he cut short an interfaith meeting of clergy after a Palestinian Muslim cleric launched a surprise attack on Israel during an impromptu address.

“I come, like so many others before me, to pray at the holy places, to pray especially for peace — peace here in the Holy Land, and peace throughout the world,” Benedict said Monday morning during a welcoming ceremony at Ben Gurion International Airport, where he was met by President Shimon Peres and Prime Minister Benjamin Netanyahu.

Benedict would repeat that desire for peace and interfaith dialogue in every appearance in the early days of his trip, which the Vatican insisted is non-political.

The cry of those killed “echoes in our hearts. It is a cry raised against every act of injustice and violence. It is a perpetual reproach against the spilling of innocent blood.”

Following the visit, in which the pope did not enter the actual museum due to an exhibit that offers an unflattering portrayal of Pope Pius XII, who has been accused of being silent in the face of Nazi atrocities against the Jews during World War II, Lau criticized the pope’s speech in an interview on Israel’s Channel 1.

Lau, a survivor of Buchenwald who serves as the chairman of the Yad Vashem Council, lamented that while Benedict’s predecessor, Pope John Paul II, in his address at the museum nine years ago offered a moving personal expression of grief, the current pope did not go that far, instead offering the Church’s “deep compassion” for those killed in the Holocaust.

Lau also pointed out that the pontiff, who is German by birth and was a member of the Hitler Youth, did not mention the Germans, or Nazis, as those who carried out the genocide, and used the word “killed” instead of “murdered” to describe how the Jews died. And, he added, the pope never said that 6 million were killed, saying only “millions.”

“With all due respect to the Holy See, we cannot ignore the burden he bears, as a young German who joined the Hitler Youth and as a person who joined Hitler’s army, which was an instrument in the extermination,” he said Tuesday on Israel Radio. “He came and told us as if he were a historian, someone looking in from the sidelines, about things that should not have happened. And what can you do? He was a part of them.”

Vatican spokesman the Rev. Federico Lombardi fired back Tuesday, noting that the pope has denounced the Nazis and spoken of his German heritage in previous speeches, including during a visit to the Auschwitz death camp, and used the 6 million figure during his remarks upon arriving in Israel.

Lombardi also said four times that the pope was never a member of the Hitler Youth, whose members were volunteers. Later in the day, however, he had to retract the statement, as the pope has acknowledged joining Hitler Youth — he and others have said he was forced to register against his will.

The spokesman also said that the pope, then known as Joseph Ratzinger, was drafted into the German Army, where he served with anti-aircraft troops.

During a brief visit Tuesday to the Western Wall, the pope placed a handwritten personal prayer between the stones of the wall asking God to “send your peace upon this Holy Land, upon the Middle East, upon the entire human family,” according to a text released by the Office of the Holy See.

Following his quiet reflection at the wall, punctuated by the whirring of camera lens shutters, the pope made a courtesy visit at the compound to the chief rabbis of Israel.  He had made a similar visit to the grand mufti of Jerusalem before his wall appearance.

The day before, the pope had stopped an interfaith conference in Jerusalem after the head of the Palestinian sharia court accused Israel of killing women and children and urged the pope “in the name of the one God to condemn these crimes and press the Israeli government to halt its aggression against the Palestinian people.”

Denouncing the statement, a papal spokesman said, “We hope that such an incident will not damage the mission of the pope aiming at promoting peace and also interreligious dialogue, as he has clearly affirmed in many occasions during this pilgrimage. We hope also that interreligious dialogue in the Holy Land will not be compromised by this incident.”

The pope, who traveled with a 40-person staff and 70 reporters, and stayed at the Papal Nuncio’s residence in Jerusalem during his visit, was scheduled to visit a Palestinian refugee camp in Bethlehem on Wednesday and Nazareth on Thursday, where he will celebrate an open-air Mass. He was to fly back to Rome Friday afternoon on a special El Al flight.

Upon the pope’s arrival, “Operation White Robe,” which included 80,000 police officers and security guards, went into effect to protect his safety.

The pope arrived in Israel after spending two days in Jordan, where he celebrated Mass before an estimated audience of 25,000 in a soccer stadium in Amman.

On Saturday he visited Mount Nebo, from where the Bible says Moses saw the Land of Israel. The pope said the site was a reminder of “the inseparable bond between the Church and the Jewish people.”

Benedict also visited the King Hussein bin Talal Mosque in Amman. He did not remove his shoes while visiting the mosque and engaged in silent reflection rather than prayer, according to reports. In a meeting there with Muslim leaders, the pope called for a “trilateral dialogue,” including the Church, to help bring Jews and Muslims together to discuss peace.

The pope and Peres together planted an olive tree at the president’s residence Monday afternoon, followed by a performance by a choir made up of Jewish and Arab girls joined by Israeli tenor Dudu Fisher, who sang “Bring Him Home” from the musical “Les Miserables” only minutes after the pope met with the family of kidnapped Israeli soldier Gilad Shalit.

“Old divisions have aged and diminished,” Peres told the pope. “So more than the need for another armored vehicle, we need a strong, inspiring spirit to instill both the conviction that peace is attainable, and the burning desire to pursue it.”

“Ties of reconciliation and understanding are now being woven between the Holy See and the Jewish people,” he added. “We cherish this process and your leadership. Our door is open to similar efforts with the Muslim world.”