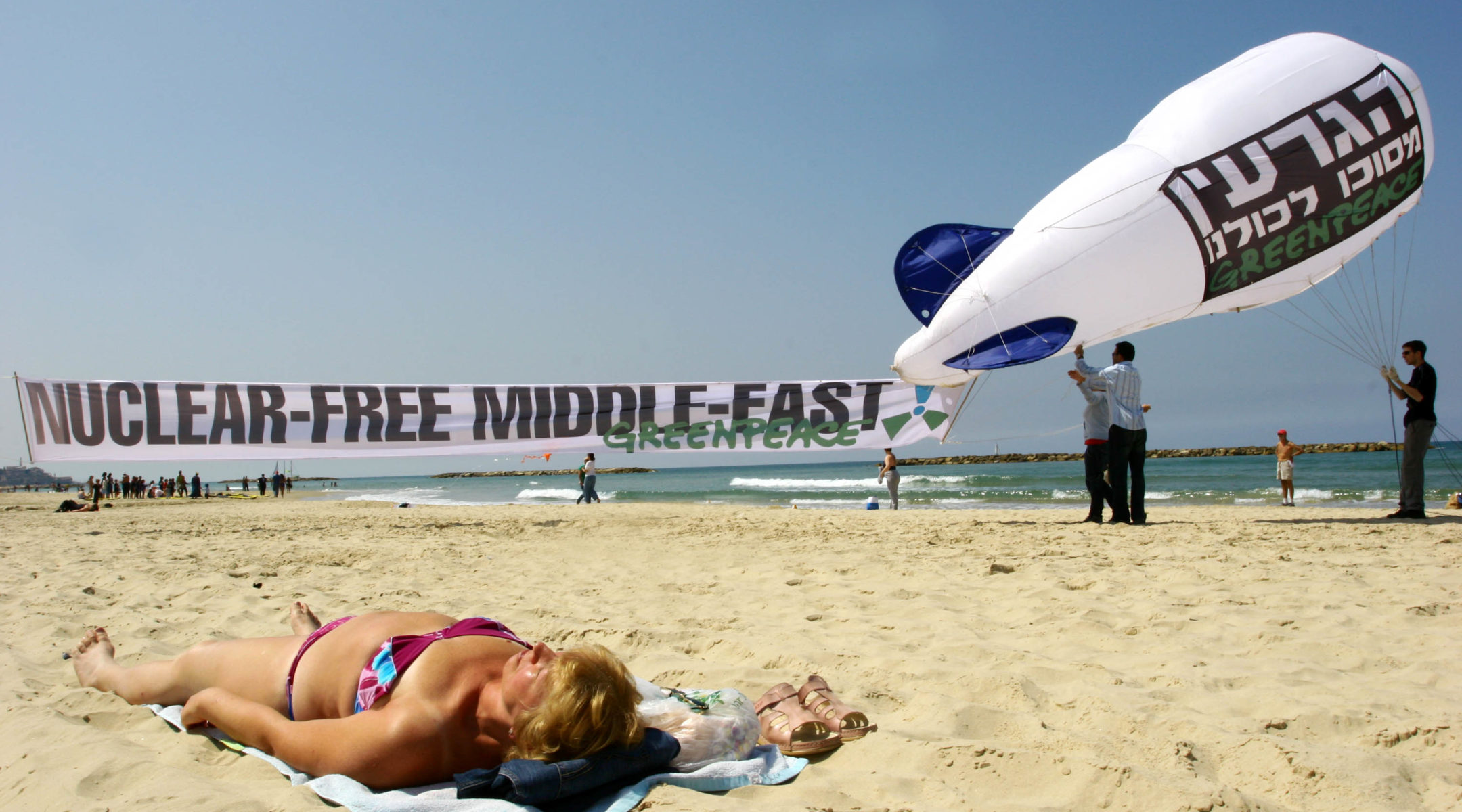 Greenpeace activists fly a zeppelin-shaped ballon over Tel Aviv coasts in 2007 to protest the nuclear threat in the Middle East, a concern the United States broached in its statement urging Israel to sign the non-nuclear proliferation treaty. (Chen Leopold/Flash 90/JTA)
Advertisement

JERUSALEM (JTA) — Given the delicate state of relations between the new administrations in Washington and Jerusalem, an American statement last week about the need for Israel to sign the nuclear non-proliferation treaty, or NPT, touched a raw nerve.

The worst-case scenario is that it portends a “grand bargain” with Iran at Israel’s expense. In this nightmare development, the American side will say to Tehran: Abandon your nuclear weapons program and we will lean on Israel to dismantle its alleged nuclear arsenal.

Few Israeli officials believe it will come to that. However, there is genuine concern at the hint of a more subtle political linkage: That the U.S. could press Israel on the nuclear issue if it continues to resist a solution of the Israeli-Palestinian conflict on the basis of two states for two peoples.

The American statement, bracketing Israel with India, Pakistan and North Korea, came during a U.N. meeting of the 189 signatories of the NPT on May 5.

“Universal adherence to the NPT itself, including by India, Israel, Pakistan and North Korea … remains a fundamental objective of the United States,” U.S. Assistant Secretary of State Rose Gottemoeller declared.

The State Department insists there is nothing new in what Gottemoeller said, pointing out that the United States has long supported universal adherence to the NPT. Indeed, the unwritten 1969 agreement on Israel’s nuclear capabilities between Prime Minister Golda Meir and President Richard Nixon was based on the following principles: Israel would not conduct nuclear tests or make declarations about having nuclear weapons, and in return the United States would not insist on nuclear inspections or pressure Israel to sign the NPT — although it would continue to support the principle of universal adherence to the treaty.

Still, Gottemoeller’s statement caught the Israelis by surprise. There was no prior coordination, and Israeli officials say they only heard about it on the news. In general, the Israelis complain that they are not being briefed by their American counterparts in the same intimate way they were during the Bush era, and they see the Gottemoeller statement as a case in point.

Worse, they think the episode may presage a new American approach that sees Israel making major compromises in the interests of a more stable Middle East, especially when it comes to Iran.

The fundamental American view is that the way to counter Iran’s nuclear program is by building a strong coalition of Middle East moderates, and that this can be done only if progress is made on the Israeli-Palestinian track.

In an interview Sunday with ABC television, Gen. James Jones, the national security adviser, made the linkage very clear.

“We understand Israel’s preoccupation with Iran as an existential threat. We agree with that,” he said. “And by the same token, there are a lot of things you can do to diminish that existential threat by working hard to achieve a two-state solution.

“This is a very strategic issue. It’s extremely important.”

The Israeli fear is that American linkage of all the big issues — Iran, nuclear weapons and the Palestinians — could translate into pressure on Israel on both the Palestinian and the nuclear issues.

Strong regional voices are echoing Washington’s message of linkage. For example, the day after Gottemoeler’s statement, Egyptian Foreign Minister Ahmed Aboul Gheit said his country does not distinguish between the dangers posed by Israeli or Iranian nuclear capabilities.

“Possession of any nuclear weapons in the Middle East is unacceptable to Egypt,” he declared.

Gheit wanted to emphasize the degree to which Egypt is opposed to the idea of an Iranian bomb, but in doing so he reiterated Egypt’s longstanding and vociferous opposition to Israel’s nuclear power. He also picked up on the linkage of the Iranian and Palestinian issues, arguing that since Iran was using the Palestinian issue to destabilize the region, an Israeli-Palestinian peace could do much to check Iran’s regional march.

Egypt and the other Arab countries have another card to play in the regional nuclear stakes — a veiled threat to go nuclear themselves if Iran acquires the bomb.

Martin Indyk, then the U.S. ambassador to Israel, at the time suggested offering those countries an American nuclear umbrella to stop them from actively pursuing nuclear weapons of their own. The Obama administration has not repeated the offer, but has committed itself to preventing Iran from acquiring nuclear weapons.

If successful, the next step could be intensified calls for a nuclear-free Middle East. Officially, Israel is in favor — but only after signing bilateral peace treaties with all the key Middle Eastern players, including Iran. Until then, Israel argues, it will need all the deterrent power it can muster.