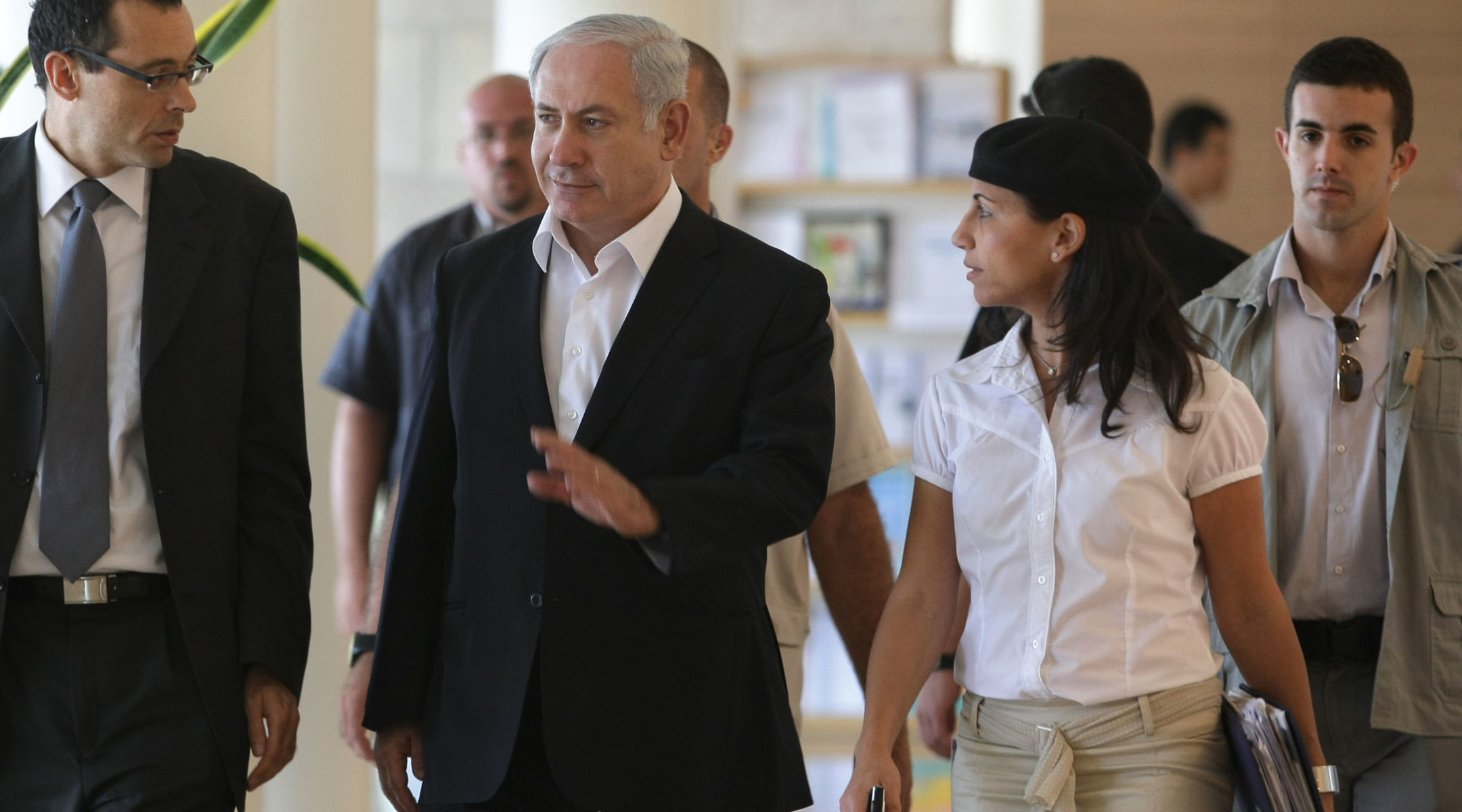 Some say Prime Minister Benjamin Netanyahu, shown arriving for the Likud Party meeting on July 20, 2009 at the Knesset, was eyeing future U.S. concessions when he defied an Obama administration demand to halt a building project in eastern Jerusalem. (Kobi Gideon / Flash 90 / JTA)
Advertisement

JERUSALEM (JTA) — Despite the latest clash between Israel and the Obama administration over building — this time in eastern Jerusalem — the United States is pressing ahead with plans to reopen negotiations on both the Israeli-Palestinian and Israeli-Syrian tracks.

In Sunday’s Cabinet session, Prime Minister Benjamin Netanyahu strongly rejected American criticism of plans by right-wing Jews to build approximately 20 units on the site of the Shepherd Hotel, once home to the Palestinian grand mufti in the mainly Arab neighborhood of Sheik Jarrah. Netanyahu argued that united Jerusalem — east and west — was Israel’s capital, and Jewish building there was not subject to negotiation.

The land in question was bought in 1985 by American billionaire Irving Moskowitz, who received a building permit through regular channels after a wait of more than a decade. Netanyahu insisted that the government had done nothing to hurry things, and had no role in approving the project.

Nevertheless, the prime minister’s critics say the timing could not have been worse and accused the government of trying to derail attempts to get peace talks going.

Some analysts believe Netanyahu deliberately heightened the quarrel over Sheik Jarrah to shift the building controversy focus from the West Bank settlements to Jerusalem, where he has a better case and wide domestic support. They say he may also be hoping to gain American concessions on Jerusalem in return for an Israeli freeze on building in the settlements. The thinking is that this would be seen by the Israeli public as a deal with Obama rather than simply caving in to American pressure on the settlements.

For the Americans, U.S. pressure on Israel over the settlements is not an end in itself but rather a means to regain Palestinian and Arab confidence, so that the United States will be able take the lead in promoting Middle East peace.

On the Palestinian track, the Americans have been hearing very different things from the two parties. Where the Palestinians want to cut straight to a final peace deal, the Israelis suggest a more measured approach.

According to the Palestinian al-Quds newspaper, the Americans favor the final-status approach and are working on a plan whereby they would allow Israel to build hundreds of units in the West Bank, if it allows a final border to be drawn between Israel and a future Palestinian state.

Al-Quds also says the Americans are proposing settling 300,000 Palestinian refugees on land Israel hands over to the Palestinian state in a future land swap. That would enable Palestinians to say they had exercised their “right of return” while also allowing the Israeli government to stop refugees from being settled in Israel proper.

The Netanyahu government, however, does not believe a final peace deal with the Palestinians is possible as long as Hamas controls Gaza.

Some on the right suggest returning to the 2003 peace “road map” and starting from square one. Others on the left, like President Shimon Peres and Labor Party leader and Defense Minister Ehud Barak, suggest circumventing Hamas by going for an interim Palestinian state in most of the West Bank with temporary borders. This, they argue, would create a dynamic toward full Palestinian statehood and, at the same time, allow Israel to keep all the large settlement blocs — at least until final borders are established down the road.

Palestinian Authority President Mahmoud Abbas, however, is strongly opposed to any temporary borders because he believes they will end up being final. Peres suggests that Israel and the United States negotiate with the Arab world in an effort to have the moderates convince the Palestinians to go along.

The equation would change if Abbas’ Fatah movement and Hamas can agree on a national unity government, thus paving the way for talks on a final peace with the Palestinian people as a whole.

It is a scenario not beyond the bounds of possibility. Shin Bet chief Yuval Diskin maintains that Hamas is considering an added emphasis on diplomacy and pushing for a Palestinian state within the 1967 borders in return for a long-term cease-fire, or “hudna.”

On the Syrian track, the Americans already have put a tentative peace blueprint on the table.

Drawn up by Frederick Hoff, the U.S. official responsible for the Israel-Syria file, the plan reportedly envisages peace in interlocking stages: First, the Israeli army withdraws from part of the Golan Heights and an international force takes over the evacuated areas, part of which becomes a peace park that both Israelis and Syrians can visit during the day. After a long period of building trust in this way, and gradually normalizing relations, Israeli settlements on the Golan would be dismantled and Israeli forces would withdraw to the final border based on the June 4, 1967 lines, with some amendments made by Hoff.

But it won’t be so easy. Netanyahu is not ready to commit to full withdrawal from the Golan as a precondition for talks, and without such a commitment Syria’s president, Bashar Asad, is unlikely to engage. Also, Assad may be reluctant to sever his ties with Iran, making peace with him and the heavy price it would entail less appealing.

As on the Palestinian track, much will depend on President Obama. After all the hard work in setting up peacemaking on both tracks, will the American president have the political will to follow through and lean on all parties to go the extra mile?