Victory for Israel in Goldstone delay, fury among Palestinians

Richard Goldstone addresses the media after presenting his commission's report on the Gaza war to the United Nations Human Rights Council in Geneva on Sept. 29, 2009. (UN Photo / Jean-Marc Ferre)
Advertisement 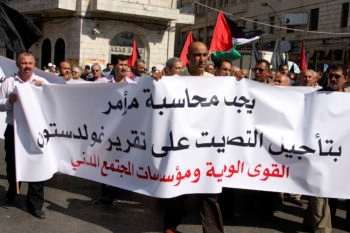 NEW YORK (JTA) – It long has been considered almost axiomatic at the United Nations that there’s no real sense for Israel to try to muster opposition to U.N. resolutions it considers hostile, particularly when those resolutions don’t carry the force of law.

The powerful 56-member Arab-Muslim bloc known as the Organization of the Islamic Conference, coupled with the complacency of Western governments, has made passage of anti-Israel resolutions in bodies such as the General Assembly and the U.N. Human Rights Council in Geneva a virtual guarantee.

So supporters of Israel were surprised and pleased when the Geneva-based council elected last week to delay a vote on endorsing the Goldstone report on the Israel-Hamas war — effectively setting aside a resolution considered negative for Israel — until the council’s next session in March.

But the firestorm of controversy it generated among Palestinians almost immediately fueled a new effort to take the matter directly to the U.N. Security Council. On Wednesday, at the urging of Libya, the Security Council held consultations in New York to decide whether or not to hold an official emergency session to discuss the Goldstone report. The council ended up rejecting the idea, but it did move up its monthly meeting in October by a week and said the Goldstone report could be discussed then.

“I think the Palestinians got the message that they had to make a choice: Either cooperate with Israel, including on the peace process, or pursue a futile political campaign based on the one-sided Goldstone report,” said Hillel Neuer, executive director of UN Watch.

Once the Palestinian Authority, which is not a member of the 47-member Human Rights Council, asked to delay the vote, other Arab and Muslim countries followed suit. The Pakistani delegation to the council made the announcement last Friday on behalf of the Muslim bloc, officially citing the need for more time to discuss the Goldstone report.

Advocates for Israel initially took the delay as a hopeful sign that strong pressure by Israel and its allies actually can yield positive results.

“What happened on the Goldstone report suggests, maybe for the first time, that complacency on Israel may have eroded,” said Felice Gaer, an expert on U.N. affairs and the director of the American Jewish Committee’s Jacob Blaustein Institute for Human Rights. “It’s a phenomenal outcome. I don’t believe this has ever happened before.”

The move infuriated Palestinians in Gaza and the West Bank. Hundreds of protesters took to the streets in Ramallah, and Hamas officials in Gaza accused Palestinian Authority President Mahmoud Abbas of treason. Barraged by the criticism, Abbas denied asking for a delay in the vote and said he would launch an investigation to discover how the delay came about.

“Abbas gave the orders to delay voting on the report,” Haniyeh said.

This week, with the criticism showing no signs of abating, the Palestinian Authority switched gears: On Tuesday, Palestinian negotiator Saeb Erakat told the French news agency AFP that Abbas was considering asking the General Assembly or Security Council to take up the Goldstone recommendations. The next day, Libya put in its request. The move constituted a major breach of U.N. protocol, since the report officially is still under deliberation at the Human Rights Council, the body that commissioned it.

The 574-page report by former South African jurist Richard Goldstone, which was released in mid-September, was commissioned amid Israel-Hamas fighting last January. Israel considered the mandate — to probe Israel’s “grave violations of human rights” — biased and refused to cooperate.

The report found both Israel and Hamas guilty of “war crimes” and called for the U.N. Security Council to send the matter to the International Criminal Court if Israel did not launch its own investigation of the alleged war crimes within six months.

The Human Rights Council — a body that has been fixated on Israel since its founding three years ago, with some 80 percent of resolutions focused on the Jewish state — was expected after last week’s debate to vote on a resolution endorsing the Goldstone recommendations.

But that never happened.

Officials at Israel’s U.N. mission in Geneva declined to talk to JTA about Israel’s role in the matter, saying they had been instructed specifically by Jerusalem to keep mum on the issue. Some media reports quoted anonymous P.A. officials as saying they were furious that Israeli officials had told reporters late last week that the Palestinian delegation was behind the delay.

Aside from the report itself, which Israeli President Shimon Peres called a “mockery of history” because it did not “distinguish between the aggressor and a state exercising its right for self-defense,” the Israeli government has a fundamental problem with being censured for taking action to protect itself against Hamas rocket attacks.

Israeli Prime Minister Benjamin Netanyahu articulated this argument last month in his address to the U.N. General Assembly. Given that the United Nations was silent when Hamas carried out intense rockets attack fire on Israel following the Israeli withdrawal from Gaza in 2005, Netanyahu said, censuring Israel for striking back during last January’s war against Hamas would destroy Israel’s willingness to take risks for peace.