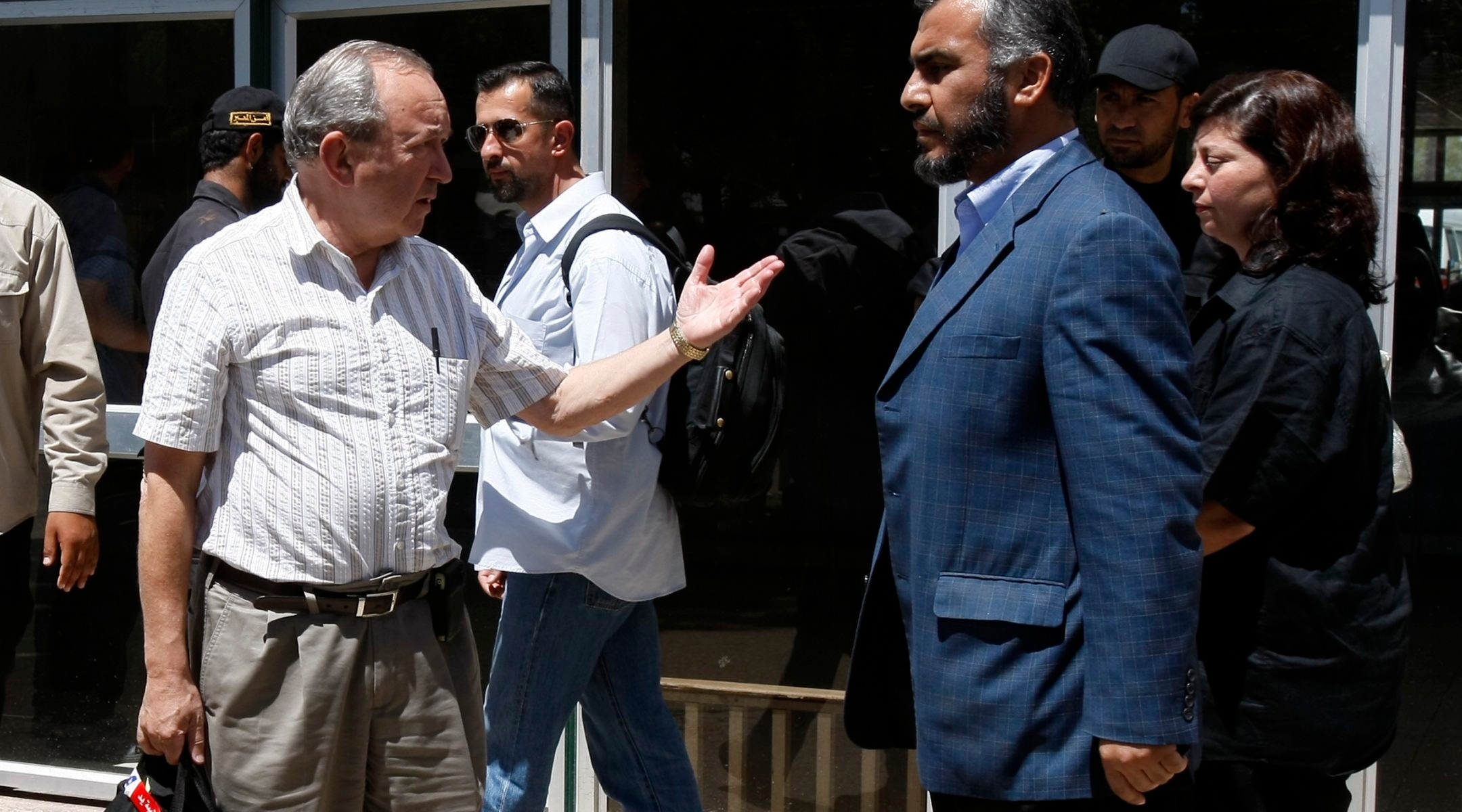 Richard Goldstone, left, shown meeting on June 1, 2009 with Ghazi Hamad of Hamas at the Rafah border crossing with Egypt, echoes many by saying Israel can end the international inquiry into his report on the Gaza war by establishing an independent commission. (Rahim Khatib / Flash90 / JTA)
Advertisement

JERUSALEM (JTA) — Prime Minister Benjamin Netanyahu is facing one of the most acute dilemmas since his return to power last March: How to respond to the U.N.-sponsored Goldstone report’s charges that Israel may have committed war crimes in the Gaza war last January.

Pressure is mounting to establish an independent Israeli commission of inquiry. Key international players including the United States, Britain and France — even Richard Goldstone, the author of the U.N. report — have intimated that if Israel sets up a credible civilian inquiry, in Goldstone’s own words, it “would be the end of the matter.”

Ending the Goldstone process would constitute a considerable diplomatic gain for Israel, and several members of the Israeli government, including Foreign Minister Avigdor Lieberman, are advising Netanyahu to go that route.

But Defense Minister Ehud Barak and the Israel Defense Forces are strongly against such an inquiry. They argue that a civilian-led investigation could cause chaos in the army, with senior officers looking for lawyers instead of focusing on military planning and training.

On Sunday, after convening a meeting of his top advisers, senior ministers and the top IDF brass, Netanyahu made some initial decisions.

He promised the army that whatever commission was finally decided on, no officers or soldiers would be called upon to testify. He also ordered a team of professionals under Justice Minister Yaacov Neeman to come up with a set of proposed legal, diplomatic and public relations counterpoints to the Goldstone report as soon as possible.

On the commission of inquiry, Netanyahu seems to be leaning toward a compromise proposal by Attorney General Menachem Mazuz. To keep the IDF happy, Mazuz has proposed relying on its internal probes into the allegations of war crimes, but adding credibility by establishing a committee of jurists and ex-generals to scrutinize the IDF’s work to make sure nothing was swept under the carpet.

The committee then would translate the findings into legal language to build a case against the Goldstone report in the international arena. Of the 36 specific allegations of possible war crimes by Israel outlined in the report, the IDF already has investigated 26.

Mazuz also proposes that cases in which the military police launch criminal investigations against individuals now come under the purview of the Attorney General’s office. In other words, Mazuz wants to take the IDF’s work and civilianize it through overarching civilian scrutiny — but without the civilian authority being able to subpoena witnesses or interrogate soldiers.

Israel, Mazuz argues, needs a credible legal mechanism as a counterweight to Goldstone.

Not all members of the government are convinced his model will be well received on the international stage. Dan Meridor and Michael Eitan of the Likud Party and Avishai Braverman and Yitzhak Herzog of Labor argue that an independent commission with a much wider mandate is necessary. Otherwise it will look as though Israel has something to hide.

They argue that no one will take seriously an investigation carried out primarily by the IDF — the very body facing charges. An independent commission with a wide mandate would be far more credible and convincing than one restricted to an evaluation of IDF findings.

Moreover, in the context of a wide-ranging, open civilian investigation, the IDF still would be able to present video footage and other evidence it has to refute the charges in the Goldstone report, and to do so on a far more appropriate stage.

There is one other argument for a civilian rather than IDF-dominated probe. A prestigious Israeli committee headed by a former justice not only would be able to close the international file on Goldstone, it would be able to present the international community with proposals for a revision of the laws of war when fighting militia groups are embedded in civilian population centers. This could make it much clearer what armies like the IDF in Gaza, or the Americans in Afghanistan or Iraq, can or cannot do against enemies using human shields in urban areas.

It also would highlight the key question ignored by the Goldstone committee: How is a modern state supposed to defend its civilians against rockets fired from inside heavily populated urban areas?

Herzog maintains that Goldstone’s most serious allegation was not aimed at the IDF but at the government of Israel: that the government actually ordered the destruction of the civilian infrastructure in Gaza in a deliberate campaign to target the people of Gaza. IDF probes cannot possibly touch on the allegation, thus Herzog argues that a much wider investigation is needed to refute it.

Interior Minister Eli Yishai says all that would be necessary to show how wrongheaded Goldstone’s claim is would be to make public the logs of the Cabinet meetings during the war.

Herzog agrees that it won’t take much to discredit Goldstone on this point.

“If the claim is investigated,” he said, “it will be shown to be absurd.”