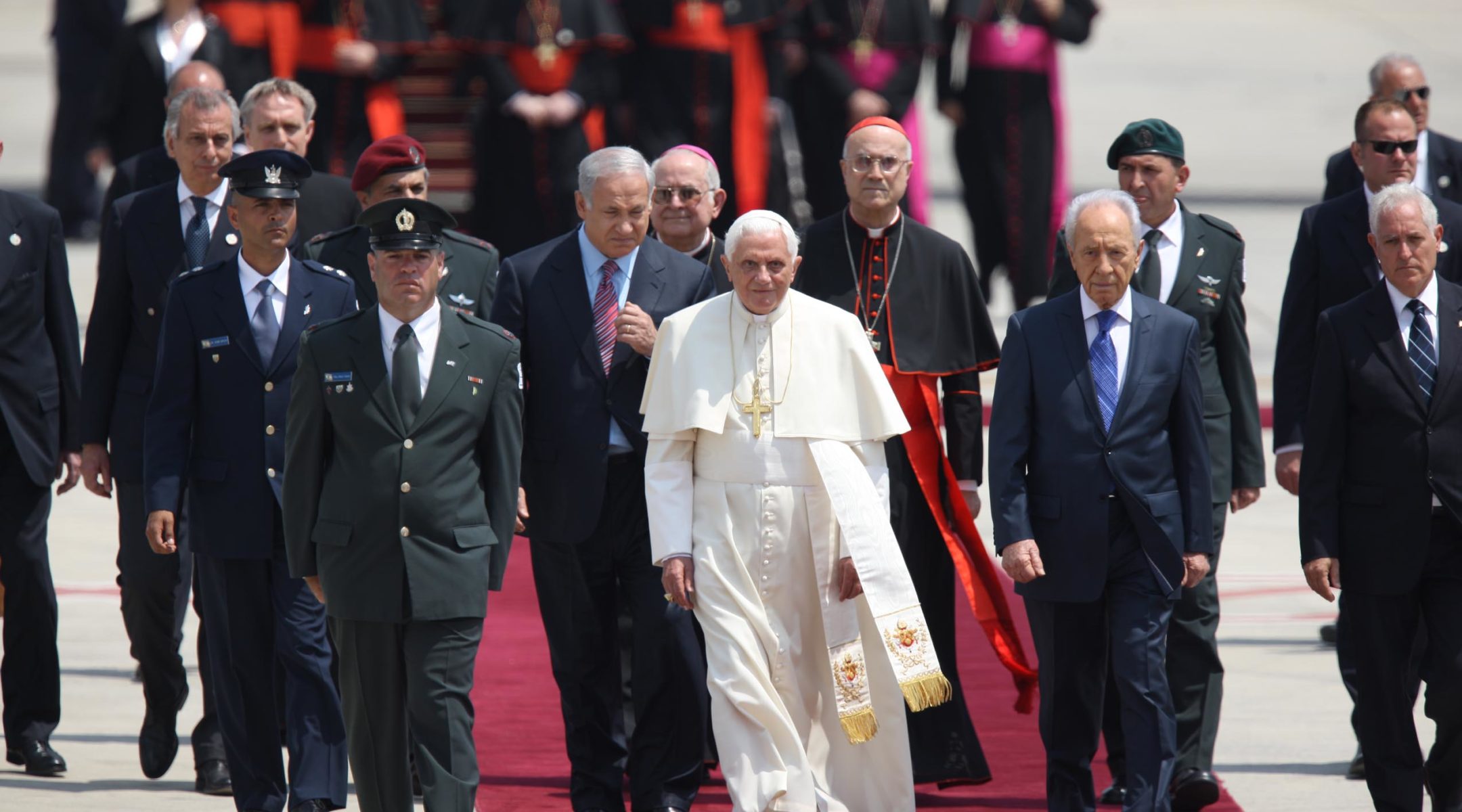 Pope Benedict XVI, seen on a visit to Israel on May 11, 2009, is facing the challenge of repairing Catholic-Jewish ties following his decision to move the Holocaust-era pope closer to sainthood. (Flash90 / JTA)
Advertisement

ROME (JTA) — For at least the third time in his papacy, Pope Benedict’s XVI is doing the Jewish dance that takes him one step back, one step forward.

The step back came when Benedict made a move in mid-December to bring Holocaust-era Pope Pius XII a bit closer to sainthood. The step forward will come in mid-January, when Benedict visits Rome’s main synagogue — a trip planned long before Benedict’s move on Pius.

The question is what impact the visit will have on ruffled Catholic-Jewish relations.

“It is an important event, a milestone in the dialogue,” Rome’s chief rabbi, Riccardo Di Segni, told Vatican Radio about the planned synagogue visit. “We have great expectations for what it can mean in terms of the general climate.”

“If we stop at the things that divide us deeply, we won’t get anywhere,” he said. “The differences are important to move forward.”

Benedict’s visit — set to take place Jan. 17, the Catholic Church’s annual Day of Dialogue with Judaism — will come a month after he recognized the religiously defined “heroic virtues” of both John Paul II and Pius XII, putting them one step away from beatification.

The Polish-born John Paul made fostering Catholic-Jewish relations a hallmark of his papacy. But critics have long accused Pius of having turned a blind eye to Jewish suffering during the Holocaust. The Vatican and other supporters say Pius acted behind the scenes to help Jews. Gary Krupp, a Jew and the head of Pave the Way, a nonsectarian foundation that promotes interfaith dialogue, suggested in a recent Op-Ed in The New York Post that criticism of Pius XII began in the 1960s as part of a Soviet smear campaign against the Catholic Church, which at the time was profoundly anti-Communist. The Anti-Defamation League responded with a call on the pope to disregard Krupp’s “flawed” evidence.

Scholars and Jewish organizations for years have called on the Vatican to fully open its secret archives in order to clarify the issue before Pius is moved any further toward sainthood. Benedict’s decision to green-light Pius’s advance drew widespread criticism from Jewish bodies. While many Jewish organizational leaders said it was up to the Vatican to decide whom to honor with sainthood, they renewed calls for the archives to be opened.

“As long as the archives of Pope Pius about the crucial period 1939 to 1945 remain closed, and until a consensus on his actions — or inaction — concerning the persecution of millions of Jews in the Holocaust is established, a beatification is inopportune and premature,” the World Jewish Congress’ president, Ronald Lauder, said in a statement.

The Vatican responded with a conciliatory statement saying Benedict’s move was in no way “a hostile act towards the Jewish people” and should not be considered “an obstacle on the path of dialogue between Judaism and the Catholic Church.”

The uproar over Pius XII is not the first episode where the Vatican had to backpedal, clarify or explain a Pope Benedict decision that angered Jews.

In 2008, Jewish protests over the reinstatement of a Good Friday Latin prayer that appeared to call for the conversion of the Jews led the Vatican to change some of the prayer’s wording. Still, Italian rabbis were so angry over the issue that they boycotted participation in last year’s January 17 Day of Dialogue with Judaism.

One year ago, the pope’s lifting of a 1988 excommunication order against Richard Williamson, a renegade Bishop who turned out to be a Holocaust denier, sparked outrage among political figures and mainstream Catholics as well as Jews. Williamson was one of four bishops rehabilitated as part of the pope’s effort to bring their ultra-conservative movement, the Society of St. Pius X, back within the mainstream Catholic fold.

The Vatican ordered Williamson to recant and admitted that the pope had not been aware of his views — despite a video of Williamson that was widely circulated on YouTube.

The pope himself issued a strong message of support to a visiting delegation from the Conference of Presidents of Major American Jewish Organizations and announced to the group the plans for his May 2009 visit to Israel, his first to the Jewish state as pontiff.

Analysts said Benedict’s move on Pius is part of the pope’s effort to shore up conservative forces within the church.

“The pope apparently has chosen to balance his unquestionable commitment to the Catholic Church’s good relations with world Judaism with his commitment to recuperating the religious right wing of Catholicism,” said Lisa Palmieri Billig, the American Jewish Committee’s liaison to the Vatican. “Obviously his path is strewn with warring obstacles.”

Rabbi Gary Bretton-Granatoor, an expert in interfaith relations and the vice president of the World Union for Progressive Judaism, said, “The great struggle of this moment is shoring up the most traditional elements of his church as he fights the growing secularization and Islamification of the European stage, which is right before his eyes.”

Bretton-Granatoor said that the visit to the synagogue in Rome is “far more telling about the state of Catholic-Jewish relations” than the move to elevate Pius.

His visit to the shul in two weeks will mark only the second time that a pope has crossed the Tiber River from the Vatican to visit the synagogue in Rome. As pope, Benedict has visited synagogues in his native Germany and in the United States, and he made the trip to Israel last May.

But the Rome synagogue has particular significance. Rome is said to have the oldest continuous Jewish community in the Diaspora. The visit to the synagogue in 1986 by Benedict’s predecessor, Pope John Paul II, was the first time any pope had set foot in any shul since the time of St. Peter.

Bretton-Granatoor put some of Benedict’s apparent gaffes down to differences in style and substance that set this pope apart from his predecessor.

John Paul “was an actor and a pastor — he understood that every gesture had meaning,”  Bretton-Granatoor said. Benedict, on the other hand, “was an academic and was never a pastor — he doesn’t get seem to get it in the same way as his predecessor.”

He added, “This pope is vastly different from his predecessor. He is a German and, therefore, cannot speak about the Shoah in the way that [John Paul], a Pole, could.”