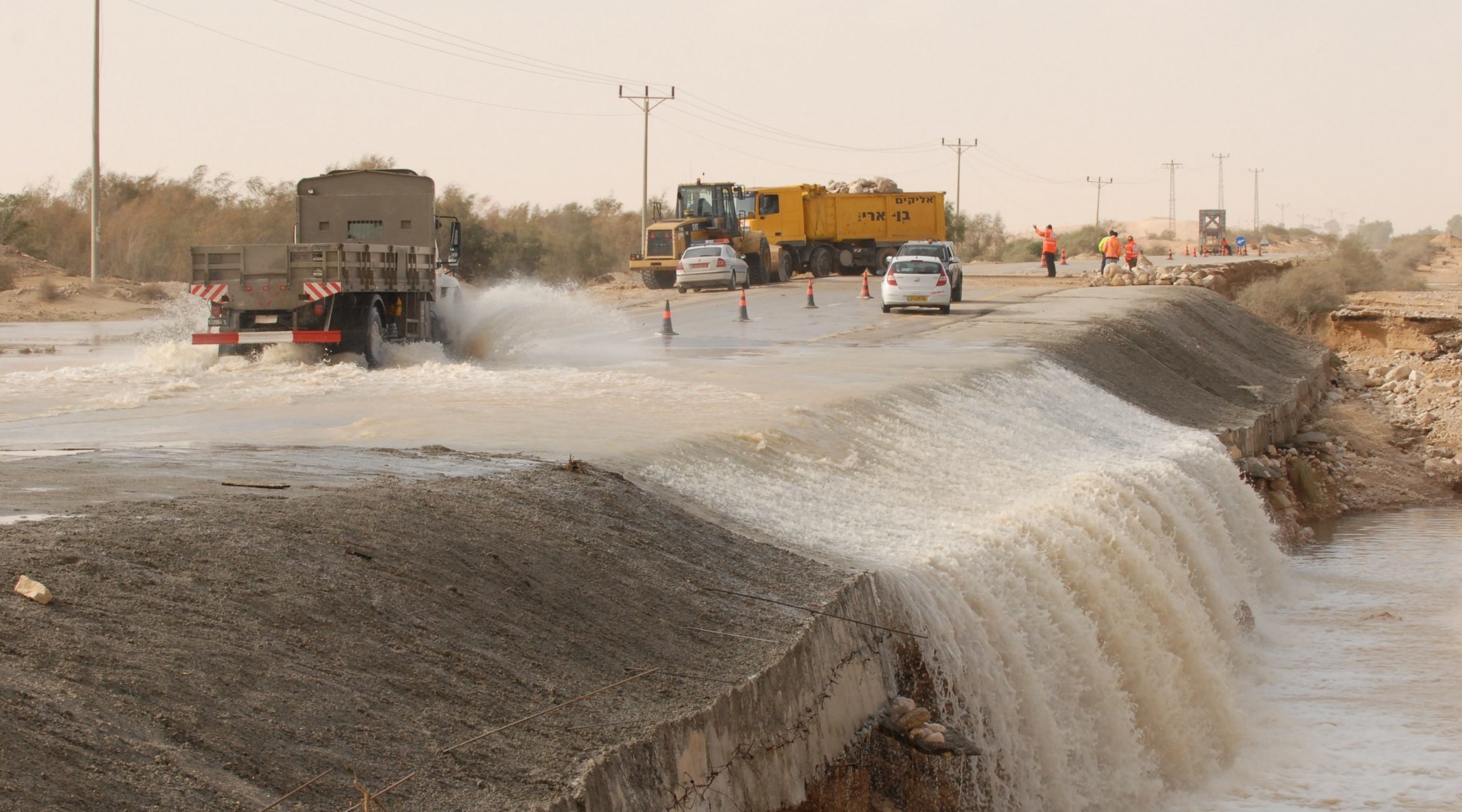 A flooded road west of the Negev Desert caused by severe rains -- did special prayers have anything to do with the downpours? (Gili Yaari / Flash 90)
Advertisement

JERUSALEM (JTA) — Here are some stories from the past few days in Israel that you may have missed.

The housekeeper, the gardener and Sara Netanyahu

Days after a former housekeeper for the prime minister’s wife filed suit against her ex-boss alleging mistreatment, Sara Netanyahu struck back against the ensuing media frenzy with a libel lawsuit against Israel’s daily Maariv for “maliciously trying to humiliate” her.

Maariv had reported after the housekeeper story broke that Netanyahu had fired a 70-year-old gardener at the prime minister’s official residence whose son had been killed in one of Israel’s wars.

Netanyahu said the man was never fired and continues to work at the residence, that the news item contained not “one grain of truth” and that the reporter behind the story, Ben Caspit, didn’t bother calling her for comment. Despite the fact that Maariv followed up with a correction, Netanyahu is suing for damages of $270,000.

But Netanyahu’s action has not dampened the press’ enthusiasm for the housekeeper story. Ynet reported this week that another ex-housekeeper had sued the Netanyahus two months ago. While details of that lawsuit are under a gag order, the minutiae of the lawsuit by the other housekeeper, Lillian Peretz, has tongues wagging.

“Sara Netanyahu abused me, paid me a salary lower than minimum wage, failed to pay my social benefits, forced me to work during Shabbat — even though I observe Shabbat — and made me call her ‘Mrs. Sara Netanyahu,’ ” Peretz said in her lawsuit. The ex-housekeeper is seeking nearly $82,000 in unpaid salary and severance pay.

The media had pilloried Sara Netanyahu, the prime minister’s third wife, during her husband’s first term in office, claiming she was overly strict with her staff and obsessive about cleanliness in her house.

Orthodox Jewish leaders and Hamas’ religious leaders both chose Jan. 14 as the day to hold special prayers for rain.

With Israel stuck in the middle of another season of below-average rainfall, Israel’s chief Sephardic rabbi, Shlomo Amar, called on the public to fast and pray for rain. Hundreds of Orthodox Jews reportedly answered the call.

On the same day, Hamas followers gathered in a large playground in Gaza City to pray for rain.

Within days the skies opened up. Heavy rainfall caused flash floods in southern Israel, killing two people whose car was swept away near a riverbed. The central Negev area already has received 100 percent of its average annual rainfall.

Up north, Lake Kinneret rose an estimated 8 inches last week. The precise level of the lake is unknown, however, since Water Authority employees are on strike and refuse to measure it.

Israeli supermodel Bar Refaeli has asked the Israel Tax Authority to exempt her from paying taxes because she works mostly abroad and, as she put it, “the center of my life is no longer in Israel.”

Refaeli earned about $2 million over the past two years, according to reports, and paid about 46 percent in taxes in Israel.

Under Israeli law, Israelis who spend more than half the year out of the country and whose income is earned mainly overseas do not have to pay Israel’s standard tax rates.

Refaeli spent five months out of the past two years in Israel, Ynet reported, citing border control records. Even if the supermodel, who graced the cover of last winter’s Sports Illustrated swimsuit edition, is granted nonresident status for tax purposes, Refaeli will pay some taxes to Israel because most of the countries she works in have tax treaties with the Jewish state.

Along came a spider

Researchers have discovered a new species of spider in the southern Arava region. But it’s already facing extinction.

The new spider, named Cerbalus Aravensis, has eight legs that can spread up to 5.5 inches apart. It was discovered by biologists from the University of Haifa in the Samar sand dune.

“The new discovery shows how much we still have to investigate, and that there are likely to be many more species that are unknown to us,” said Uri Shanas, who headed the research team. “If we do not preserve the few habitats that remain for these species, they will become extinct before we can even discover them.”

The Samar sand dune, which once was 2.7 square miles but today is down to 1 square mile, is the last dune left in the region due to farming and the loss of sand to construction.

And the winner is …

Somebody in Israel won Israel’s largest-ever lottery drawing last month, worth about $20.6 million.

But nobody has stepped up to claim the prize since the Dec. 26 drawing.

“The message we want to get out is, ‘People, check your tickets,’ ” Oved Hazan of Israel’s state-run lottery told Israel’s Channel 10 television news last week.

The winner has up to six months to claim the prize money before it goes back to state coffers.

Dozens of ancient artifacts were stolen from an exhibit at the Korin Maman Museum in Ashdod, including silver coins from the Hellenistic period, two gold earrings, a bronze spear and several pieces of pottery.

Ironically, the relics were part of an exhibit called “Antiquities Thieves in Israel.”

The artifacts had been recovered by the Israel Antiquities Authority from thieves and put on display.