Groups to White House: What about Palestinian incitement? 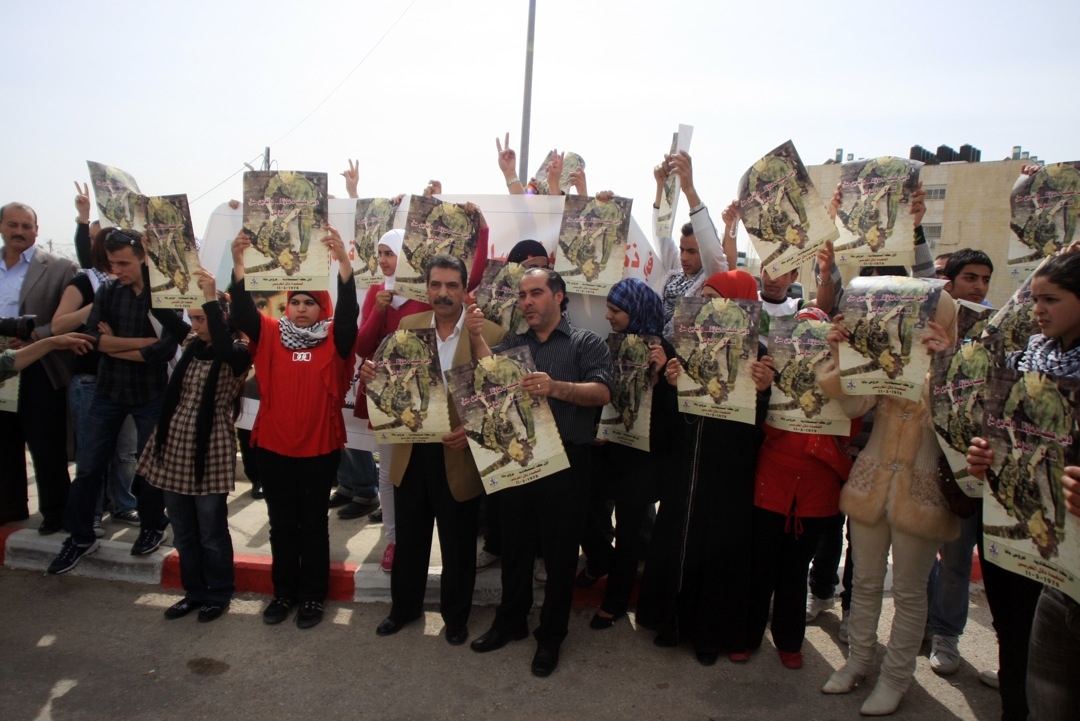 Palestinians in the West Bank city of Ramallah carry pictures of Dalal Moughrabi during a controversial ceremony naming a plaza for the late terrorist, March 11, 2010. (Flash 90)
Advertisement

NEW YORK (JTA) — In response to the Obama administration’s stepped-up criticism of Israeli building plans in Jerusalem, Jewish groups are slamming the White House for failing to speak out more against Palestinian incitement.

Particularly galling, several Jewish organizational leaders said, is that the administration has ratcheted up its criticism of Israel while failing to utter a word about the decision of the Palestinian Authority to go through with plans to name a public square in Ramallah after Dalal Mughrabi, a terrorist who led a 1978 bus hijacking in which 37 Israelis, including 12 children, were killed.

In the middle of last week, pro-Israel organizations, including the watchdog group Palestinian Media Watch, pointed out that the official naming ceremony — timed to coincide with the anniversary of the terrorist attack — was set to take place March 11, during U.S. Vice President Joe Biden’s visit to Israel and the Palestinian territories. It was quickly announced that the ceremony would be canceled, but a scaled-down version of the event did end up taking place that day, with the youth division of Fatah, the faction of Palestinian Authority President Mahmoud Abbas, playing a lead role.

The White House and left-wing Jewish groups say they are as concerned with Palestinian actions that undermine the peace process, especially the issue of anti-Israel incitement, as they are with Israeli settlement policies. But several centrist and right-wing pro-Israel groups have pointed out that U.S. criticism in recent days has been focused exclusively on Israel.

“This monstrous spectacle” — the ceremony for Mughrabi — “took place while Vice President Biden was visiting the region,” said the executive director of the American Jewish Committee, David Harris, in a statement echoing the sentiments of several Jewish organizations, including the Zionist Organization of America, the Orthodox Union and the National Council of Young Israel. “Unfortunately, we have not heard a single word of condemnation from the U.S. administration.

“While the administration has focused its ire on Israel for clearly misguided steps taken by the Ministry of the Interior, and later apologized for by Prime Minister Netanyahu, the glorification of this terrorist sends a clear signal that Fatah, conventionally regarded as a moderate party, has no serious commitment to securing a peaceful resolution of the conflict.”

In addition to the flurry of statements from Jewish groups, the Israeli government also is promising to launch an official effort to monitor Palestinian incitement. Earlier this month, Prime Minister Benjamin Netanyahu reportedly briefed the Knesset Foreign Affairs and Defense Committee about his plans, promising regular reports on the issue.

“We will set parameters by which to measure the level of incitement,” Netanyahu told the committee, according to Haaretz. “People must know exactly what is happening on this issue because for a peace agreement, education toward peace and acceptance of Israel are needed.”

The issue has taken on added urgency in recent days, and not just because of the unrelenting U.S. criticism of Israeli building plans in Jerusalem.

On Tuesday, Palestinians rioted in Jerusalem as part of a “day of rage” declared by Hamas, in part to protest the rededication Monday night of the ancient Hurva Synagogue in the Jewish Quarter of the Old City of Jerusalem. But the Israeli decision to rededicate the synagogue also was seized on by PA officials with ties to Fatah, who attempted to portray it as part of a plot against Muslim holy sites on the Temple Mount.

Khatem Abd el-Kader, the Fatah official responsible for Jerusalem, encouraged Palestinians to “converge on al Aksa to save it” from “Israeli attempts to destroy the mosque and replace it with the [Jewish] temple.” He called the synagogue rededication a “provocation,” cautioning that Israel is “playing with fire.”

The unfinished Hurva Synagogue, whose name means ruins, was destroyed in an Arab riot in 1721. It was rebuilt in the 1860s, but destroyed again after Jordan took control of the area in the 1948 war.

“At this very moment, 3,000 Israeli security officials are protecting Jerusalem because extremist Arabs are using the re-dedication of the Hurva Synagogue as an excuse to incite violence,” Jennifer Laszlo Mizrahi, president of The Israel Project, said in a statement. “Not once did we hear Biden ‘condemn’ the fact that Palestinians were planning — during his trip there — to honor a terrorist by dedicating a town square in her name.”

On Monday, U.S. State Department spokesman P.J. Crowley did use part of his daily media briefing to criticize Palestinian leaders over their comments regarding the Hurva Synagogue.

In answer to a subsequent question, he said the concerns had been conveyed to Palestinian officials but declined to offer more details.

The briefing appeared to validate at least one administration lament — that its efforts to focus attention on perceived Palestinian misdeeds are often ignored by the media. Reporters appeared to have trouble comprehending that the State Department’s concerns related to the Palestinian reactions, not the Israeli decision to rededicate the synagogue.

When it finally became clear that this is what Crowley was saying, reporters went back to asking about U.S. upset with Israel, but only after one accused Crowley of trying to head off criticism of the Obama administration by balancing out things with a complaint about the Palestinians.

Crowley brushed off questions about whether Israeli or Palestinian actions were most problematic.

“We’re not trying to achieve any kind of comparability here,” he said. “Anytime we have concerns about actions being taken on either side, we will not hesitate to say so.”