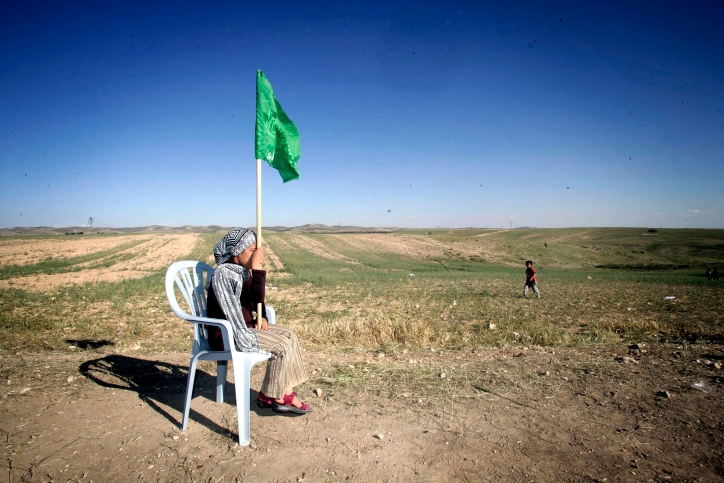 JERUSALEM (JTA) — A mass demonstration by Israeli Arabs highlighted the core contradiction at the heart of the Israeli-Arab experience: demands for greater equality within Israeli society amid growing alienation from the Israeli state.

An estimated 50,000 demonstrators marched in two long columns March 30 to the Galilee town of Sakhnin to commemorate Land Day, an annual protest against unequal distribution of land resources and in memory of 19 Arabs killed in clashes with Israeli security forces in 1976 and 2000.

In the first Land Day demonstration, in March 1976, six Arabs protesting the expropriation of some 5,000 acres in the Galilee were killed. Thirteen died in Land Day rioting following the outbreak of the second Palestinian intifada in the fall of 2000.

This year’s protest was one of the biggest and best organized to date. For the first time, large numbers of Arab women took part, and there was no police presence along the route or violence.

The message, however, was not uniform.

While speakers focused mainly on land allocation, thousands of demonstrators waved Palestinian flags, emphasizing their own Palestinian identity and suggesting identification with Palestinians in the West Bank and Gaza.

A few masked men went further. As the procession passed, they hoisted large photographs of Hezbollah leader Hassan Nasrallah and slain Hezbollah operations chief Imad Mugniyeh, an expression of support for the hostile Iranian-backed Shiite militia. The Hezbollah supporters, however, proved to be very much in the minority. After angry exchanges with the marchers, they were confronted by Sakhnin municipal stewards and, after a brief scuffle, forced to leave.

Although public support for Israel’s enemies is rare, there can be little doubt that Israeli Arab alienation from the Jewish state is growing.

In late 2006, the Higher Arab Monitoring Committee — the Arab community’s main representative body — published its “Vision Document,” calling for a large measure of Arab political and cultural autonomy. Israeli Jews saw in this a radical demand for separation from the state; Arab leaders countered that it was more a plea for help and a warning of what might happen unless the Jewish majority makes a genuine effort to integrate the 20 percent-strong Arab minority as fully equal citizens.

The main Arab charge on Land Day was that the Israeli government continues to destroy illegally built Arab homes, mainly in the Wadi Ara area of central Israel and the Negev desert in the south, without giving the Arabs a chance to expand their villages, towns and cities legally. According to the Higher Arab Monitoring Committee, by not drawing up new master plans that allow for growth of Arab urban and rural areas, the government is effectively choking them.

The ensuing tensions have been exacerbated by a string of legislative initiatives by Foreign Minister Avigdor Lieberman’s hard-line Yisrael Beiteinu party, the latest of which is a proposal to open the foreign service only to those who have done military or national service — effectively disqualifying most Arabs.

Lieberman’s argument is that Israeli Arabs must be made to realize that sharing in the benefits of Israeli life comes at a price: loyalty to the state. Israeli Arabs, however, see this as discrimination on ethnic grounds. And pointing to Lieberman’s key position in government, Arab Knesset members charge that racism has become a central tenet in Israeli political life.

Writing in Yediot Achronot, Mohammed Zeidan, chairman of the Higher Arab Monitoring Committee, insisted that the Israeli-Arab struggle was not anti-Israel and had just two goals: equality within Israeli society, especially with regard to land ownership and use; and a just peace between Israel and the Palestinian people based on two states along the 1967 lines.

“Our central message on Land Day is that we are part of Israeli society and we are struggling to remain part of it,” he wrote.

Some Israeli right-wing politicians focused on the hoisting of the Hezbollah photographs and the potential threat a radicalized Israeli-Arab community could pose to the Jewish majority. Likud Knesset member Ophir Akunis called for tough measures against the masked Hezbollah supporters, arguing that a democracy under threat must defend itself.

Avishai Braverman, a member of the Labor Party and the minister in charge of minority affairs, agreed that the men who hoisted the photographs should be punished, but insisted that most Arabs want to be part of Israeli society. Braverman argues that integrating Israeli Arabs as equals in Israeli society is a major strategic interest, for security and economic reasons.

A former World Bank economist and president of Ben Gurion University, Braverman has established a $40 million fund for projects in Arab communities, and intends to raise more, partly from Diaspora Jews — just as he did in transforming Ben Gurion University from a backwater college into a major academic institution. He argues it would be money well spent in defusing what might otherwise become a major existential threat.

“When I go round the country, Arabs say to me, ‘Braverman, we finished the university, now we want jobs here because we have nowhere else to go.’ On the other side, there are people creating fear and talking about a fifth column,” he told JTA. “If we don’t want the Israeli Arabs to turn against us, we must embrace them.”