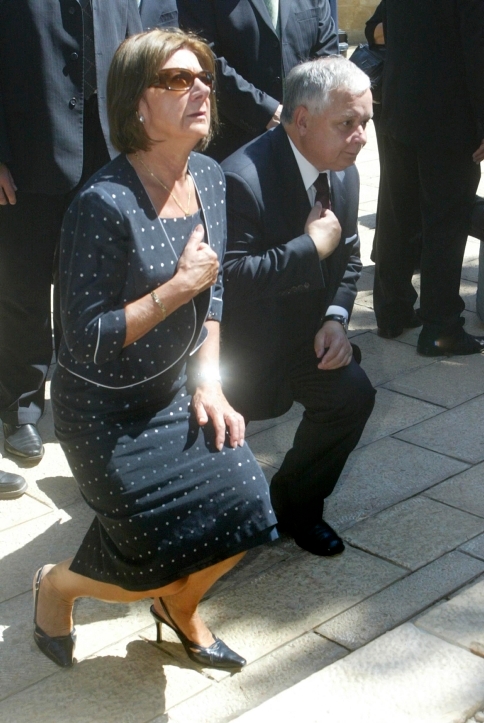 PRAGUE (JTA) – For Jews, Poland’s late president, Lech Kaczynski, was a man of many firsts.

“A lot of those who are politically right of center are open to Jewish contributions to Polish culture, but if you had a different person in power they would have been quiet about it. Kaczynski empowered those people to also have a voice,” Schudrich said.

Schudrich had been invited to accompany the presidential delegation to the April 10 event in Katyn commemorating the 1940 massacre there of 20,000 Poles by Soviet forces, but the rabbi could not attend because it was on the Sabbath.

On Sunday, mourners packed Warsaw’s Nozyk Synagogue, where Kaczynski once visited, for a memorial service for the victims of the crash. Nearby, some 100,000 Poles filled the streets as the president’s coffin passed by in a procession.

It was one of the great ironies of Polish history that a nationalistic, ultra-conservative Catholic who may have counted some anti-Semites as his supporters was a pivotal figure in the post-Communist healing of grudges that have so long divided Poles and Jews.

Kaczynski’s death, as tragic as it may be, is not likely to set back Polish-Jewish or Polish-Israeli relations, insiders say. The role of president is largely ceremonial in Poland; the government is run by the prime minister, currently Donald Tusk. Tusk and his Cabinet are considered allies of Israel and the United States, and are friendly to Jewish concerns.

“Fifteen years ago, such a calamity would have serious repercussion, but today relations are well established,” said Andrzej Zozula, executive director of the Union of Jewish Communities in Poland. Zozula said he had been friendly with the late president since their days together in the anti-Communist opposition in the 1980s. “The interests of all are more important than one man, even a person such as Mr. Kacynsnki,” Zozula said.

Examples of the president’s dedication to Jewish issues reads like the refrain in Dayeinu, the Passover hymn: “It would have been enough if…”

As mayor of Warsaw before winning the presidency in 2005, Kaczynski donated public land and money for the Museum of the History of Polish Jews, to open in 2012.

In 2008, as president, he restored Polish citizenship to the 15,000 Jews exiled in 1968 by Poland’s Communist government in the throes of an anti-Semitic frenzy. Kaczynski was among Europe’s top political supporters of Israel.

“The president and his wife were great friends to Israel,” Israel’s former ambassador to Poland, David Peleg, said. “And those who traveled with him on that plane were not only personal friends of mine, but were dedicated to the preservation of Jewish sites in Poland.” Peleg singled out for praise Janusz Kurtyka, head of the National Remembrance Institute, Deputy Culture Minister Tomasz Merta and presidential adviser Mariusz Handzlik. Handzlik was so close with the Jewish community that he attended the bat mitzvah of Schudrich’s daughter.

Peleg, now head of the World Jewish Restitution Organization, noted that Kacynski lobbied against the Goldstone report criticizing Israel for its actions in the 2009 Gaza war. He also upgraded military, economic and cultural cooperation between Israel and Poland and opposed anti-Semitism by emphasizing the shared history of Jews and Poles.

“In my first discussions with him as mayor he talked about the Jews at Katyn,” said Peleg, referring to the Russian site where Kacynski was headed when his plane crashed. “He made the point that more than 10 percent of those killed in Katyn were Jewish officers.”

This focus took on special meaning when post-Communist Poland began reexamining its history without Communist censorship.

Long-simmering confrontations erupted: Some Jews felt Poles were too sympathetic to Hitler’s Final Solution; some Poles insisted that their suffering under Hitler was ignored by Jews. There were condemnations of Jewish-Communist collaboration, and of Polish Catholic disdain for Jews.

All along, the conservative Kaczynski, from the Law and Justice Party, did what he could to bring the two sides together.

“I would never vote for his party, I have leftist views,” said Oskar Skuteli, a member of Zoom, a Polish youth organization. “But the amount of things that Kaczynski did for Jews had never been done before by a leftist government. He was even called a Jewish agent by the radical right.”

To be sure, there were bumps in the road to Polish-Jewish reconciliation that still have not been quite smoothed over. For a short period, the Law and Justice Party partnered in a government coalition with the League of Polish Families, whose members have been accused of anti-Semitic rhetoric. Kaczynski also never fully turned his back on Radio Maryja, a Catholic fringe broadcaster who accused Jews of terrorizing Poland with demands for property restitution.

But few would deny that Kaczynski, along with others who worked to preserve Jewish culture and died in the plane crash, collectively represented a brain trust of Jewish-Polish-Israeli relations.

“Kaczynski and those around him, they are not replaceable,” said Monika Krawczyk, CEO of the Foundation for the Preservation of Jewish Heritage in Poland. “His approach to Jewish issues has to do with his personal experience and convictions. We hope for people similarly sensitive, but they will not be the same.”

For now, the speaker of the Polish Parliament, Bronislav Komorowski, assumes the presidency until elections are held in two months. Komorowski is one of several top candidates for the post. All are likely to continue Kacynsnki’s path of Polish-Jewish reconciliation, observers say.