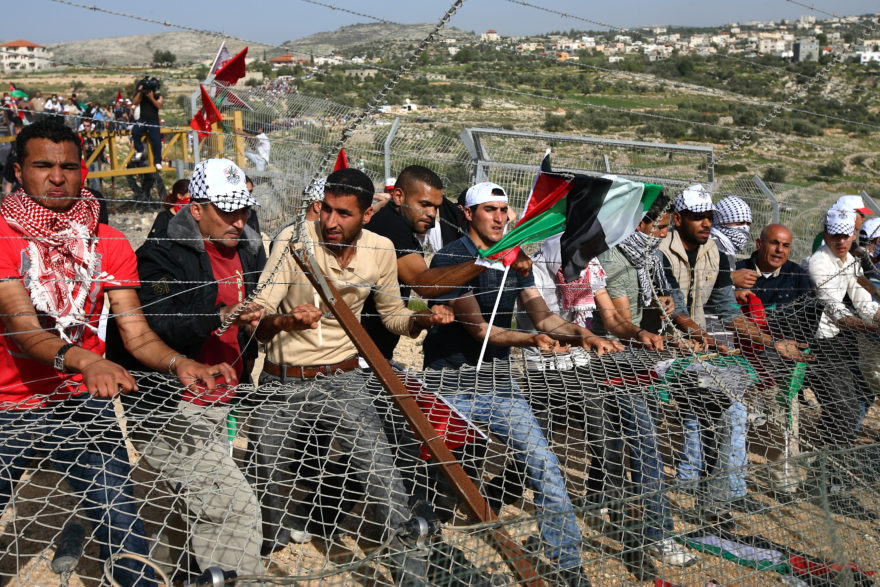 Palestinian and Israeli protesters try to break down a section of Israel’s West Bank security fence during a demonstration near Bil’in, Feb. 19, 2010. (Omer Messinger / Flash90 / JTA)

BIL’IN, West Bank (JTA) – Rami Burnat sits in his wheelchair toward the back of a sprawling courtyard where Palestinian speakers take turns championing the cause of nonviolent resistance.

Burnat, 29, has been disabled ever since a bullet pierced his neck in clashes in late 2000, shortly after the second intifada began. Still an activist, Burnat is among a small but growing number of Palestinians trying to mount a new kind of intifada against Israel: a nonviolent one.

After years of armed struggle, which led to much bloodshed and limited gains, Palestinians like Burnat are seeking to use popular resistance — including weekly marches, strikes and international boycotts — to put pressure on Israel and mobilize world opinion in support of the Palestinian cause.

"Hopefully, this will lead to less loss of life and injury than the armed struggle," he said.

Proponents hope civil disobedience, part of a strategy they call the White Intifada, also will flummox Israeli authorities in their efforts to crack down on protesters waving banners rather than shooting automatic rifles, and cast Israeli soldiers as oppressors.

Unlike Ghandi or the Rev. Martin Luther King, Jr., however, the Palestinians who support this approach for the most part don’t appear to be embracing nonviolence as a philosophy. Rather they see it as part of a calculated strategy to achieve Palestinian goals.

“It’s about seeing benefits,” Burnat said. “If we don’t see them, it’s up to us to decide what kind of resistance we would then use next."

To be sure, the movement encompasses only a narrow swath of Palestinian society, and even the movement’s own protests aren’t completely free of violence. In weekly demonstrations in Bil’in against Israel’s West Bank security fence, for example, the Palestinians throw stones. Demonstrators say the stones are a response to Israeli soldiers shooting tear gas and rubber bullets to disperse the gatherings.

The shift to nonviolence began in Bil’in, west of Ramallah, about six years ago, and it was in Bil’in last week that Palestinians held a three-day conference on Palestinian popular resistance.

Palestinian Prime Minister Salam Fayyad spoke at the conference, as did members of rival factions, including Hamas. Though the movement’s leaders want it to transcend Palestinian factions, the movement increasingly is associated with Fayyad, who is from the Fatah faction, and who seeks to achieve Palestinian independence through nonviolent popular struggle, the building of state institutions and a political campaign.

"This is the way to end occupation,” Fayyad said at last week’s conference. “It is the source of our self-empowerment, and it will lead to the political support we need and the establishment of a Palestinian state."

Fayyad has said he plans to unilaterally declare Palestinian statehood next year.

In a sign of international support for the movement, conference attendees included representatives of 23 foreign consulates and embassies, including from the European Union, organizers said.

Yaron Ezrahi, a Hebrew University political scientist, says it may be too late for the Palestinians to mount an effective campaign of nonviolent resistance.

Years of violence have enabled the Israeli right wing to define the campaign against Palestinian resistance as one of security, not political morality. Moreover, he said, Palestinian violence has unified Israelis against what they perceive as a physical threat from Palestinians and has led Israelis to see “the Palestinians not as victims but as the victimizers."

Mohammed Khatib, a member of the Bil’in Popular Struggle Committee, acknowledged the challenges facing the effort to forge a popular struggle — most notably the fight to win over the Palestinian street.

"We have always said a long journey begins with small steps," he said. "But resistance, for it to be effective, must be taken part by all."

The weekly protests at Bil’in remain the movement’s flagship activity. Dozens of protesters — including Palestinians, Israeli sympathizers and international activists — set out every Friday afternoon for the outskirts of Bil’in, where a section of the security fence abuts the village.

Things often take a violent turn. Last Friday, for example, an Israeli-Arab protester was hit in the head by a tear gas canister and suffered moderate injuries.

Shlomo Dror, a spokesman for the Israeli Defense Ministry, said such demonstrations are not nonviolent because they include stone throwing and attempts to damage or break through the security fence.

"Unfortunately, these events are not quiet,” Dror said. “There is always some level of violence connected to them. The army has no problem with peaceful demonstrations; it’s their right to demonstrate. Our problems begin when stones are thrown or property is damaged.”

Bil’in has been declared a closed military area in order to better enable the army to operate there and make necessary arrests when disorder erupts.

Movement leaders say Israeli authorities have arrested dozens of activists connected with the protests in Bil’in and other protests across the West Bank.

"These arrests won’t stop the movement; it’s only growing," said Majeeda Samara, whose husband, Abdullah Abu Rahma, was arrested four months ago on a weapons charge.

Rahma denies the charges against him, saying his “weapons” were a collection of empty tear gas canisters and rubber bullet casings he had collected at demonstrations.