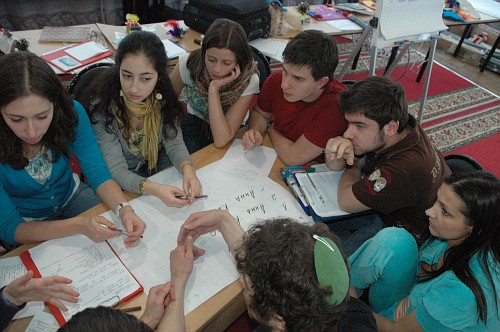 MOSCOW (JTA) – After decades of community-building from the top down, often with the aid of donors from overseas, can Russia’s Jewish communities build themselves from the bottom up?

That’s the question that a group of, well, donors from overseas are trying to determine with a new educational program for young Russian Jews aimed at fostering future leaders who could make Jewish communities in Russia more creative, self-motivated and independent. The program, which is for professionals who are Jewish but do not work inside the Jewish communal world, is sponsored by the American Jewish Joint Distribution Committee.

“We’ve spread our net wide. We wanted to find people who are perhaps not yet so involved in Jewish activities, but are young, full of ideas and ready to do something,” said Masha Goldman, senior program manager at the Jewish community development department of JDC’s Moscow office, which is running the program, called Knafaim (“wings” in Hebrew).

“We have to admit that many previous attempts to breathe life into Jewish communities in Russia were not a success,” Goldman said. “The number of existing grass-roots projects is very little for a city like Moscow. Maybe the problem is that teaching people about being Jewish is simply not enough. You have to stir people’s enthusiasm, too. So we tailored this course, which differs radically from the majority of existing educational programs.”

Knafaim consists of four five-day seminars over the course of a year. This year, 28 people were accepted from a pool of about 120 applicants. They are receiving training in personal development, leadership and project management, both for businesses and nonprofits. Their teachers come from one of Russia’s leading universities, the Higher School of Economics, and several Russian nonprofits. Israeli Shay Dahari carries out team-building exercises.

Misha Libkin said he’s participating in the project with his children in mind.

“I want my children to have a place to come when they are 7 to 10 years old,” Libkin said. “To achieve this, you need an independent community that can grow from the bottom. We have to get people used to paying for valuable products. We need to motivate aspiration for Jewish education. Otherwise, new ‘lost generations’ will appear.”

The program was designed to appeal to professional Russian Jews who are not very involved in Jewish community. The program’s backers believe that trained professionals like these ultimately may be more useful for the community than those who are steeped in Jewish life but do not have the necessary professional leadership qualities to build successful, sustainable community institutions.

“Someone who is successful in his career will definitely at some point develop the desire to pay society back — at least for the purpose of trying themselves in some new sphere,” program participant Ilya Zalessky said. “At the same time, a solid professional background is necessary for a community leader.”

Goldman said the program has to offer valuable training in order to draw capable young people.

“Young people can choose from any activities they like, so to make Jewish activities really competitive in this market, something special is needed,” Goldman said. “The course we offer gives more than just Jewish education. It leaves place for personal and professional development, and lets one acquire skills that may be valuable in any career.”

In the latest seminar, which took place in early May, participants were asked to present their own projects for enhancing community life.

Ilya Flux, 23, came up with a Web site about Jewish life in Moscow providing a detailed guide of current events, discussion forums and social media. Flux owns his own Web design firm.

“As for my Jewish life, it has never been really active,” he said. “I go to a synagogue several times a year, and I participated in the Birthright program in Israel some years ago. It never occurred to me, however, that these two sides of my life could be combined.”

The idea for the Web site, Flux said, hit him in an earlier seminar, when he met Libkin, now his partner.

“Misha, unlike me, had been taking active part in numerous Jewish activities, and he mentioned that work with information in this sphere left much to be desired,” Flux said. “Well, we’ve found each other and have become a perfect team.”

Natalya Ganeeva, 22, an architecture student, chose T-shirt design employing Jewish themes. She also took it upon herself to redesign the seminar’s brochure.

Dahari, the Israeli team builder, said he was proud of the 28-person squad.

“I train people who are supposed to lead people,” he said. “Thus they have to understand what motivates people and how important it is to be part of the group.”

Another important part of the Knafaim seminars is the study of project management. Tatiana Burmistrova, an expert on charity, leads a course on fund raising, including its local peculiarities.

“There may be investors for your projects, or sponsors or donors,” she told the students. “Also, there’s a purely Russian practice where an official assigns some money for your project as charity on a condition that you pay part of the money back to him. Never agree to this. Reputations take ages to build, but are destroyed so easily.”

As a take-home task for the next seminar, all the participants this summer have to draft a budget of their projects and a detailed “map” of potential donors.

Flux and Libkin already have completed the task. Their eagerly anticipated Web site is scheduled to launch in the near future.