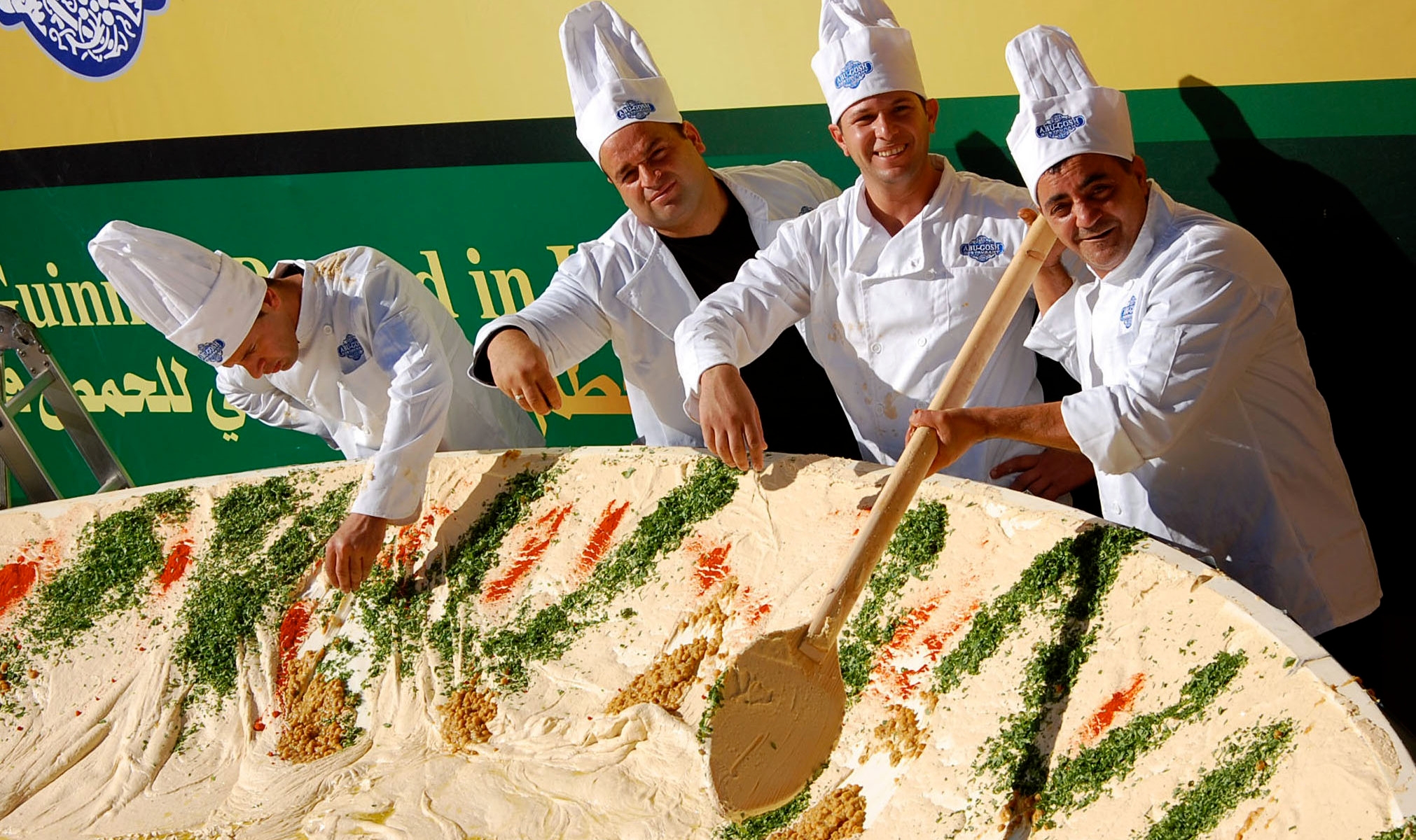 This record-breaking 4-ton bowl of hummus, prepared in the Israeli-Arab town of Abu Ghosh in January, was bested in mid-May in Lebanon when some 300 chefs made a 10-ton bowl of the stuff. (Rachael Cerrotti/Flash 90)
Advertisement

JERUSALEM (JTA) — Lebanon and Israel are at war — over hummus.

Over the weekend, some 300 chefs in Lebanon created a plate of hummus weighing more than 23,000 pounds, or 10 tons — more than doubling an Israeli record that had been set in January.

The weekend feat shattered the record set by 50 chefs in the Arab-Israeli village of Abu Ghosh near Jerusalem in January, when they created a four-ton plate of hummus to beat a record set in Lebanon several months earlier.

Lebanon and Israel long have had dueling claims over which culture came up with hummus. Lebanese chefs accuse Israel of stealing the product, and exporting and marketing it around the world as an Israeli creation.

“If you enter any good hummus restaurant in this region, you will see Jews and Muslims, Palestinians and Israelis sitting at the same table, eating the same food,” Shooky Galili, an Israeli who blogs about hummus, told CNN. “I think in the end this rivalry will show that we in the Middle East have far more in common than the things that divide us.”

No shortage of chickpeas has been reported in the region.

How do you talk on 2.1 mobile phones?

Israelis are more technologically connected, work longer hours and are more educated than they were a decade ago, according to a recently released report of Israel’s 2008 population census.

In 2008, 26 percent of Israeli families lived in rented homes, an increase in the number of renters. Some 66 percent owned their residences.

Israeli companies that trade on the Tel Aviv Stock Exchange are a bad religious investment, a haredi rabbinical court has ruled.

The Badatz rabbinical court, whose rulings are observed by much of the ultra-Orthodox community, has decreed that Jews should not buy shares in Israeli companies because they violate Jewish law by operating on Shabbat or using suggestive advertising.

For the first time, an Israeli ministry will be a sponsor of Israel’s gay Pride Week.

The week of events, titled “Love Thy Neighbor,” will commemorate Liz Trubeshi and Nir Katz, two young Israelis who were murdered at a gay community center in Tel Aviv last year.

Israel’s Science, Culture and Sport Ministry will kick in an estimated $13,000 to fund a pride village in Tel Aviv’s city center during Pride Week, which runs June 4-12.

Israel’s top three dairy companies are battling for customers for Shavuot, when dairy product sales jump by nearly 50 percent for the dairy-oriented holiday.

Tnuva Food Industries will supersize its packages of cheese, cottage cheese and milk, while the Strauss Group and Tara Dairies will lower prices, Israel’s business daily Globes reported. Tnuva and Tara also will invest a combined $1.7 million in pre-Shavuot advertising.

“There is heavy consumer traffic at the refrigerator during the holiday, and it will happen whether we participate in the party or not,” said Michel Ben-Weiss, the health and wellness division general manager at Strauss.

Israeli children may be smiling more now that pediatric dental care is part of the health care basket.

The Cabinet approved the inclusion of dental care for children up to the age of 8 at a cost of nearly $47 million a year. The plan will go into effect in July.

Free services will include twice-yearly checkups, a cleaning and twice-yearly X-rays. Fillings and extractions will cost a nominal fee.

“There must be healthy and open competition in providing dental care to Israel’s children,” Israeli Prime Minister Benjamin Netanyahu said.