Study of American Jews making its way into Israeli schools 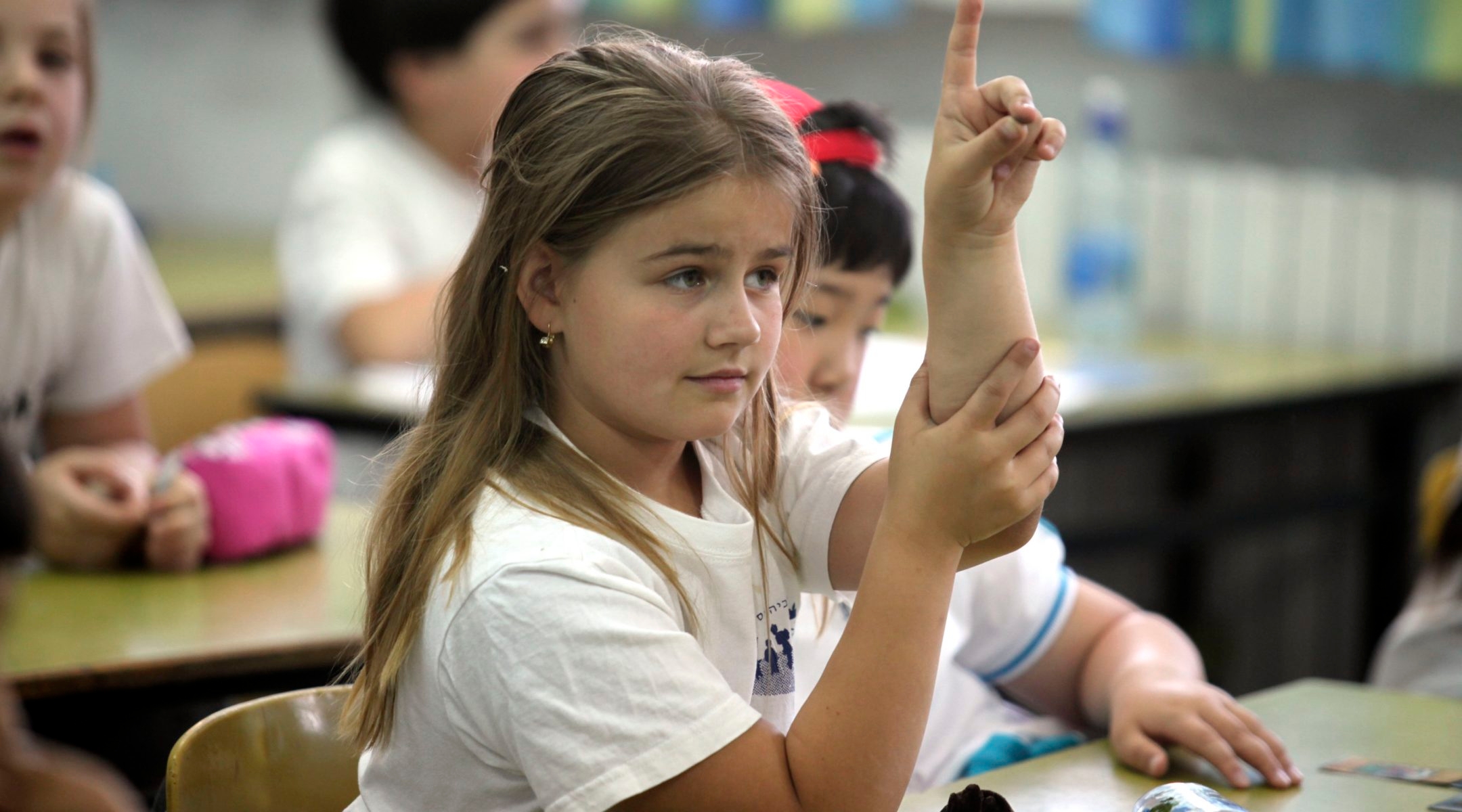 TEL AVIV, Israel (JTA) — The Jews of America may be the largest Jewish community in the Diaspora, but that does not mean Israeli schoolchildren learn much about them.

Sixty-two years after Israel’s founding, its school system still largely sticks to the Zionist trope that all Jews should live in Israel and those who do not at the very least should be actively engaged in helping support the Jewish state. In turn, there is scant study of contemporary Jewish life in America.

“The bottom line is that there is very little taught, if there is anything at all,” said Daniel Gross, a Hebrew University graduate student who has researched the topic.

But there is some change afoot.

Signaling the beginning of a shift in direction, 11th- and 12th-graders preparing for the national history matriculation exam this year for the first time were required to study a unit on American Jewry’s contribution to the Jewish people after the Holocaust.

Orna Katz-Atar, a high school history teacher who drew up the new curriculum for the Education Ministry, said that plans are under way to introduce a new unit on Israel and the Diaspora, with a focus on American Jewry, probably by the fall of 2012.

“We are in the process of building the curriculum, gathering material and teaching the teachers,” Katz-Atar said.

At a time when studies show a declining sense of kinship between American Jews and their Israeli counterparts, Israelis’ unfamiliarity with Diaspora Jewry is a subject of some concern in America. This lack of familiarity only exacerbates tensions over divisive Israel-Diaspora issues, such as the debate over who is a Jew. There is a feeling that members of the world’s two largest Jewish populations know less about each other with each passing generation.

Until this year, when and if the subject of American Jewry was taught at all in Israeli schools, it usually was within the context of the great wave of Jewish migration in the 19th century, the life of Jews in America between the world wars and what American Jews did to try to help their brethren during the Holocaust.

Policymakers feared that “showing a successful Diaspora might encourage emigration,” Gross said. “Another problem has been how the religious schools would teach about Reform or Conservative Judaism, and how the topic might hurt the Zionist agenda.”

A 2005 report by the American Jewish Committee found that only 14 percent of Israeli teachers surveyed said they taught about Reform or Conservative Judaism in their schools in the previous three years.

“I tell my students all the time that we and the American Jews are brothers,” Katz-Atar said. “It’s important that students understand that we did not do everything alone, that the Zionist project was assisted by the entire Jewish world.”

One place where Diaspora studies are taught differently is in Modiin, a rapidly growing city midway between Jerusalem and Tel Aviv. For the past five years, seventh-graders have been studying a course called “Friends Across the Sea” as part of a pilot program initiated by the Education Ministry, the TALI educational fund and the Jewish Agency for Israel.

In this new curriculum, students learn about the various Jewish religious denominations, the challenges of Jewish continuity and Diaspora concerns over intermarriage. A section on Jewish feminism includes the emergence of female rabbis.

The program’s backers want to bring the curriculum to public schools across Israel — and to translate it into English for study in American Jewish schools and into other languages for other Diaspora communities.

“I think it’s a result of changes in 1990s, when increasing numbers of Israelis encountered the Jewish American community through organized delegations,” said Varda Rafael, an educator who helped coordinate the project. They “realized we can learn from each other — not copy each other, but inspire one another.”

Gross says the Israeli perception of American Jewry is changing, at least in academic circles.

“In the past, Israelis would say of American Jewry that they chose not to be with us, but if they want to support us financially or politically that’s great,” he said. “But now there is the sense that maybe there is a need for greater Jewish pluralism in Israel.”

Israelis unhappy with the Orthodox monopoly on religious matters are beginning to look to American Jews for direction, Gross noted.

But among the general Israeli population, most Israelis seem to have little or no concept about the lives of their American Jewish counterparts.

Yisrael Wolman, in a scouring Op-Ed last month in the Israeli daily Yediot Achronot, mocked his fellow Israelis for being apathetic about American Jews.

“The American Jewish leadership is aging and is frightened by surveys of assimilation and low birth rates and is putting most energies into strengthening its own community,” åçhe wrote, “but this does not mean a parallel blind identification with Israel. The tragedy is that for the average Israeli, it is as interesting as last year’s snowfall. Tens of thousands of Israelis fly to America each year to have a great time in Times Square, gamble in Las Vegas or hang out in Disney World. How many of them have visited a single Jewish institution or have met with American Jews of their own age?”

“We in Israel, by not learning how American Jews think, lose in our capacity to engage in deep dialogue with them,” he said. Israelis pay for this ignorance, he noted. “These are the same people from which we are asking for passionate advocacy within the American Jewish system, people whose own children we are sometimes disallowing as Jews. We are smacking around the people who love us most.”

Shlomi Ravid, co-director of the Jewish Peoplehood Hub, a start-up that seeks to be a clearinghouse for peoplehood issues, says there is one key question.

“Are we a people who has a state, or a state that has a people?” he asked. “I would say for most Israelis it’s all about Israel, and the Jewish people are supposed to be source of personnel, support and funding. There is a loss of a sense that the real client here is the Jewish people, and the state is a very important expression of the agenda of the people, but it’s not the soul. That Jewish life matters and is important everywhere it exists.”