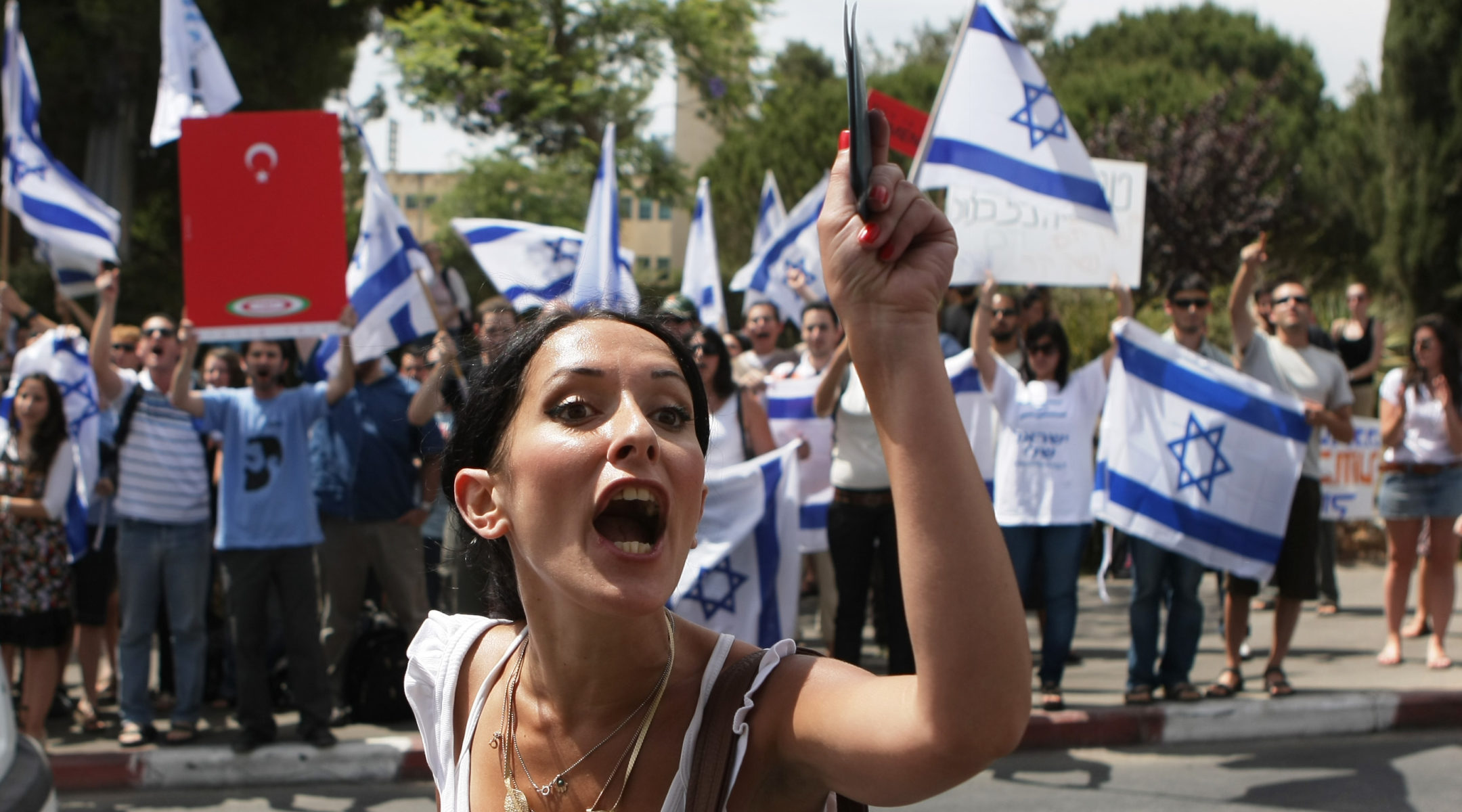 An Israeli student brandishes her identity card in a demonstration outside Jerusalem's Hebrew University in support of the Israeli Navy raid on ships bound for Gaza, June 1, 2010. (Kobi Gideon / Flash90)
Advertisement

ASHDOD, Israel (JTA) — The blurry black-and-white video footage was not what any Israeli wanted to see: elite navy commandos armed with paint balls (the pistols were only to be used as a last resort) dangling by a rope onto a boat filled with activists wielding metal bars and knives.

In one scene, an Israeli commando is thrown to the deck below by the mob aboard the ship.

“It’s not just appalling footage, it’s a national humiliation and a blow to Israel’s deterrence,” military analyst Amos Harel wrote in the Israeli daily Haaretz a day after the deadly confrontation between Israeli commandos and pro-Palestinian activists aboard the Gaza-bound ship that left nine activists dead. “The question is why the soldiers were put in this situation in the first place.”

As Israeli officialdom begins the process of reckoning — the Navy is expected to conduct an inquiry and there have been calls for Defense Minister Ehud Barak to resign — analysts tried to untangle the strategy behind the botched raid on the Free Gaza movement flotilla.

Pundits in the Israeli media spanning the political spectrum described the raid as an intelligence, operational and political failure. Even many of those defending the need for stopping the Gaza-bound ships questioned why Israeli soldiers were lowered one by one via rope onto a deck full of waiting assailants. Several Israeli soldiers were injured during the raid.

Military sources said that although the commandos knew a confrontation was possible on the ship they boarded, the Mavi Marmara, they were surprised by the attempts to kill Israeli troops.

Despite the violent result of the raid, government officials said Israel had little choice but to find some way to confront and halt the six-ship flotilla because of the risk that there could be weapons in the uninspected cargo that could reach Hamas, the terrorist group that rules the Gaza Strip.

“This is the ninth effort to get boats into Gaza,” said Andy David, a spokesman for the Israeli Foreign Ministry. “The first three were allowed through, but then we began to see it was becoming like a leaking faucet we had to put an end to because, as we have seen, Hamas is doing all it can do in its power to smuggle in weapons.”

David added, “If they had wanted to really deliver humanitarian aid, they could have done it through the Ashdod port.”

Passengers aboard the ships, however, said they did not trust that Israel — which has enforced a three-year blockade of Gaza, since Hamas militants wrested control of the territory from the Fatah-led Palestinian Authority in a bloody coup — to deliver the aid.

“There was a need to stop these ships from coming to Gaza because it was not a humanitarian mission,” Livni told Turkish television. “It was all about provocation and the need to have this as a propaganda, not a humanitarian aid, mission.”

The government also was wary about who was on board the ships, Israel Defense Forces spokeswoman Maj. Avital Leibovich told reporters during a briefing overlooking the Ashdod port as the ships in the flotilla were brought in for inspection Monday.

“You don’t know who is on board such ships and whether they might be a security threat or not,” she said.

The government made it very clear that it was not going to allow the passage of these ships and, in turn, wrote veteran commentator Nahum Barnea in Yediot Achronot, “committed itself, for all intents and purposes, to a confrontation.”

Some Israelis are saying the strategy was a mistake, that it would have been better to ignore the ships rather than give more fodder to pro-Palestinian activists trying to mobilize anti-Israel and anti-blockade sentiment.

“If the siege had any international legitimacy, today it lost a great deal of it,” said Meir Javedanfar, an independent political analyst. “Yes, Israeli citizens have a right to live in peace, but they have to find other ways of doing it. The siege hurts Israel more than Hamas because of the political costs it pays in terms of isolation, the damage of its relations with its allies and Europe and how it helps demonize Israel.”

The massive diplomatic fallout triggered by the flotilla confrontation has ratcheted up the debate in Israel over the efficacy of Israel’s policy of blockading Gaza.

“Three years of a failed strategy brought us to the events of today,” said Yossi Alpher, co-editor of BitterLemons.org, an Israeli-Palestinian website. “We could have dealt with this differently had we thought better strategically in advance about the consequences of our failed strategy in Gaza.”

The blockade on Gaza has been a public relations burden for Israel ever since it began three years ago. While Israeli officials credit it with isolating and weakening Gaza’s Hamas rulers, curbing Hamas rocket fire on Israel and slowing the flow of weapons into Gaza, critics have accused Israel of carrying out a policy of collective punishment and often blocking even legitimate humanitarian and civilian materials from reaching Gaza’s residents.

“We wish to make clear that such tragedies are entirely avoidable if Israel heeds the repeated calls of the international community to end its counterproductive and unacceptable blockade of Gaza,” the statement said.

But proponents of the strategy for dealing with the flotilla and of the blockade itself said that allowing the ships to pass would have opened a new access route for Iran to send rockets to the strip.

“If there was no siege at all, they can bring whatever boats they want,” Israeli lawmaker Aryeh Eldad of the National Union Party told JTA in a telephone interview. “They will bring tanks, cannons, long-range missiles — exactly what we see in hands of Hezbollah in Lebanon, where we have no control whatsoever. If we stop the siege we will see the mirror image of Hezbollah in the Gaza Strip.”