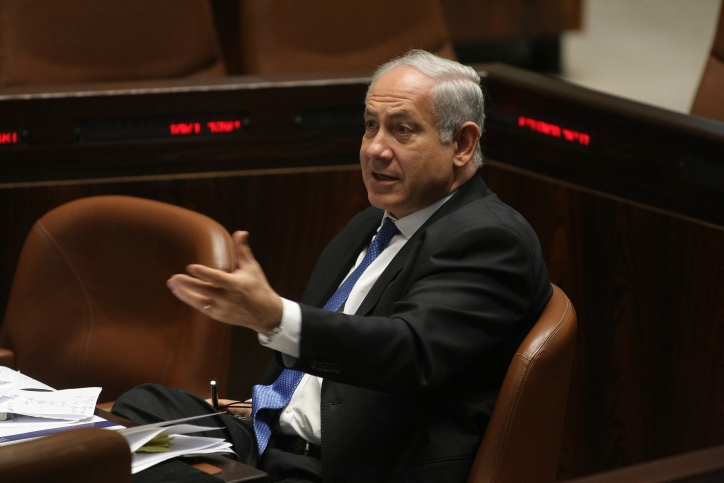 JERUSALEM (JTA) — If the United States doesn’t attack Iran’s nuclear facilities within the next eight months or so, Israel probably will.

So says journalist Jeffrey Goldberg in the September issue of The Atlantic magazine in an article that is fueling debate and speculation among many Middle East experts.

Goldberg bases his conclusion mainly on three premises: In the Israeli view, Iran will be in a position to produce a bomb by next spring or very soon thereafter. Prime Minister Benjamin Netanyahu is taking persistent Iranian threats to wipe Israel off the map seriously and is resolved to prevent a second Holocaust. And Netanyahu and Defense Minister Ehud Barak argue that even if Iran doesn’t use the bomb, a nuclear threat hanging over Israel could destroy the Zionist enterprise, with Israelis leaving the country and prospective immigrants staying away.

Goldberg makes much of the prime minister’s reverence for his 100-year-old historian father, Benzion Netanyahu, who sees history in terms of successive threats to the existence of the Jewish people. And it is true that Netanyahu at times depicts himself as a latter day Churchill, whose life’s mission is to save his people.

Nevertheless, Goldberg gives many reasons why Israel would think twice before launching an attack on Iran.

On the tactical level, a strike against Iran’s well-protected and far-flung nuclear facilities might have limited effect. Also, the operational complexity of having to fly great distances, over American lines or Arab territory, is a military planner’s nightmare.

Far worse, though, on the strategic level, is the fact that attacking Iran without an American green light could lead to a major rupture between Jerusalem and Washington. And if distanced from or even abandoned by America, Israel could quickly become a pariah state isolated on the international stage.

The widespread international condemnation of Israel’s action against a Turkish “peace” vessel last May is an indication of where things could go.

Moreover, any Israeli strike against Iran would almost certainly trigger a major regional war, with Israel under missile and rocket attack from Iran, from Hezbollah in Lebanon, and also possibly from Syria and Hamas in Gaza. That, in turn, could lead to spiraling oil prices for which Israel would be blamed. And Iran and its proxies almost certainly would unleash terror attacks against Jewish targets worldwide.

For reasons like these, outgoing Israel Defense Forces Chief of Staff Lt. Gen. Gabi Ashkenazi is said to be unenthusiastic about launching an Israeli strike. Although the Israel Defense Forces reportedly has conducted simulation exercises as far afield as Greece, and is continually fine-tuning its operational plans, Ashkenazi would prefer not to have to carry them out.

Ashkenazi is not the only senior military man with doubts.

Maj. Gen. (Res.) Giora Eiland, a former national security adviser and one of Israel’s sharpest military analysts, argued in a much-touted position paper late last year that there is no way Israel would risk harming its key strategic relationship with the United States for the lesser gain of putting Iran’s nuclear program back by a few years. Moreover, he said, if there is to be a military strike, the chances are that the Americans would prefer to carry it out themselves.

According to Eiland, some U.S. Army chiefs maintain that since America would be affected by the fallout of any strike, it should bring its greater military prowess to bear to ensure success.

In Eiland’s view, for Israel to have a realistic strike option, the following conditions would have to pertain: a clear failure of the current sanctions against Iran; American unwillingness to take military action despite what some of the generals have been saying; and American understanding for Israel’s need to act. Then Netanyahu would have to make his own personal calculus — bearing in mind that failure could leave the Gulf unstable, Western interests undermined, Israel blamed and isolated on the world stage, and worst of all, Iran’s drive to acquire nuclear weapons accorded a degree of legitimacy.

Zeev Maoz, a political scientist at the University of California, Davis, and at the Interdisciplinary Center in Herzliya, adds another concern. In a mid-August article in Haaretz, he suggested that an attack on Iran could lead to international pressure on Israel to dismantle its presumed nuclear arsenal and to sign the Nuclear Non-Proliferation Treaty. If Israel refuses to buckle, it could be ostracized, Maoz wrote, and if it does buckle under pressure, it would be losing a key bargaining chip for the creation of a new regional security order.

So given the risks an attack on Iran would entail, would Israel consider a nuclear balance of fear with Iran?

According to Maj. Gen (Res.) Yitzhak Ben Yisrael, former head of military research and development in the IDF and the Defense Ministry, in such a balance the advantage would tilt hugely in Israel’s favor. He told JTA that the Iranians are trying to build a fission bomb that at around 20 kilotons would be about the size of the American bomb dropped on Hiroshima in 1945.

Foreign experts assert that Israel possesses fusion bombs that can be from 50 to 250 times more destructive than the 1945 atomic bomb.

In late 2007, Anthony Cordesman, a senior researcher at the Washington-based Center for Strategic and International Studies, published “Iran, Israel and Nuclear War: An Illustrative Scenario Analysis,” in which he tried to gauge the outcome of a nuclear showdown sometime in the next decade. His bottom line: Israel would be able to survive and rebuild, while Iran would not.

According to Ben Yisrael, the Iranians are very well aware of this disparity and therefore would be unlikely to start a nuclear war against Israel.

“Maybe the Iranian man in the street doesn’t know these facts, but the engineers working on the Iranian bomb certainly do. And so does [Iranian President Mahmoud] Ahmadinejad,” Ben Yisrael told JTA.

Nevertheless, Ben Yisrael, like most Israeli analysts, is adamantly opposed to Iran acquiring the bomb for two reasons: The Middle East almost certainly would go multinuclear in its wake, exponentially increasing the chances of someone mistakenly pressing a nuclear button, and terrorists might get their hands on a nuclear device with no balance of fear possible.

Indeed, most Israeli analysts see compelling American reasons for action. They argue that the Obama administration would be loath to see a Middle East nuclear arms race undercutting the president’s vision of a nuclear-free world. It also is crucial for America to prevent Iran from using a nuclear umbrella to promote terror and extortion against the West, or terrorists from getting their hands on a dirty bomb, or Iran from using its nuclear posture to gain control of Middle East oil supplies in the Gulf.

In addition, the failure to stop Iran from going nuclear could lead to a loss of American prestige and influence in the region, with wavering Gulf states moving from the American to the Iranian orbit.

So if sanctions don’t work, and if a popular uprising in Iran led by the opposition Green Movement fails to materialize, the Israeli leadership’s hope is that America will see the necessity of taking military action, despite the ongoing wars in Afghanistan and Iraq. The Israelis are careful not to spell this out, since they don’t want to be seen as pushing for an American attack.

Israeli analysts point out that what would be very difficult for Israel to achieve, militarily and diplomatically, the United States could achieve much more easily. According to Goldberg, Netanyahu himself often tells visitors “the secret” that the U.S. Army is much bigger than Israel’s.

Netanyahu in his meeting with Obama in early July was heartened, according to aides, by what he heard from the president on Iran. Indeed, it appears that U.S. policy is to prevent Israel from going it alone, with Joint Chiefs of Staff Chairman Adm. Mike Mullen urging Israel to bite the bullet, while Obama reassures Israeli leaders that he will not allow Iran to get the bomb.

Will Israel, because of the threat posed by a nuclear Iran, then take the risk of acting alone? And, crucially, will the United States then give Israel a green light to attack?

For now, so many variables are in play that Netanyahu and Obama themselves are probably still unsure of the answers.