Israeli-Palestinian preview: Who’s coming to dinner at the White House? 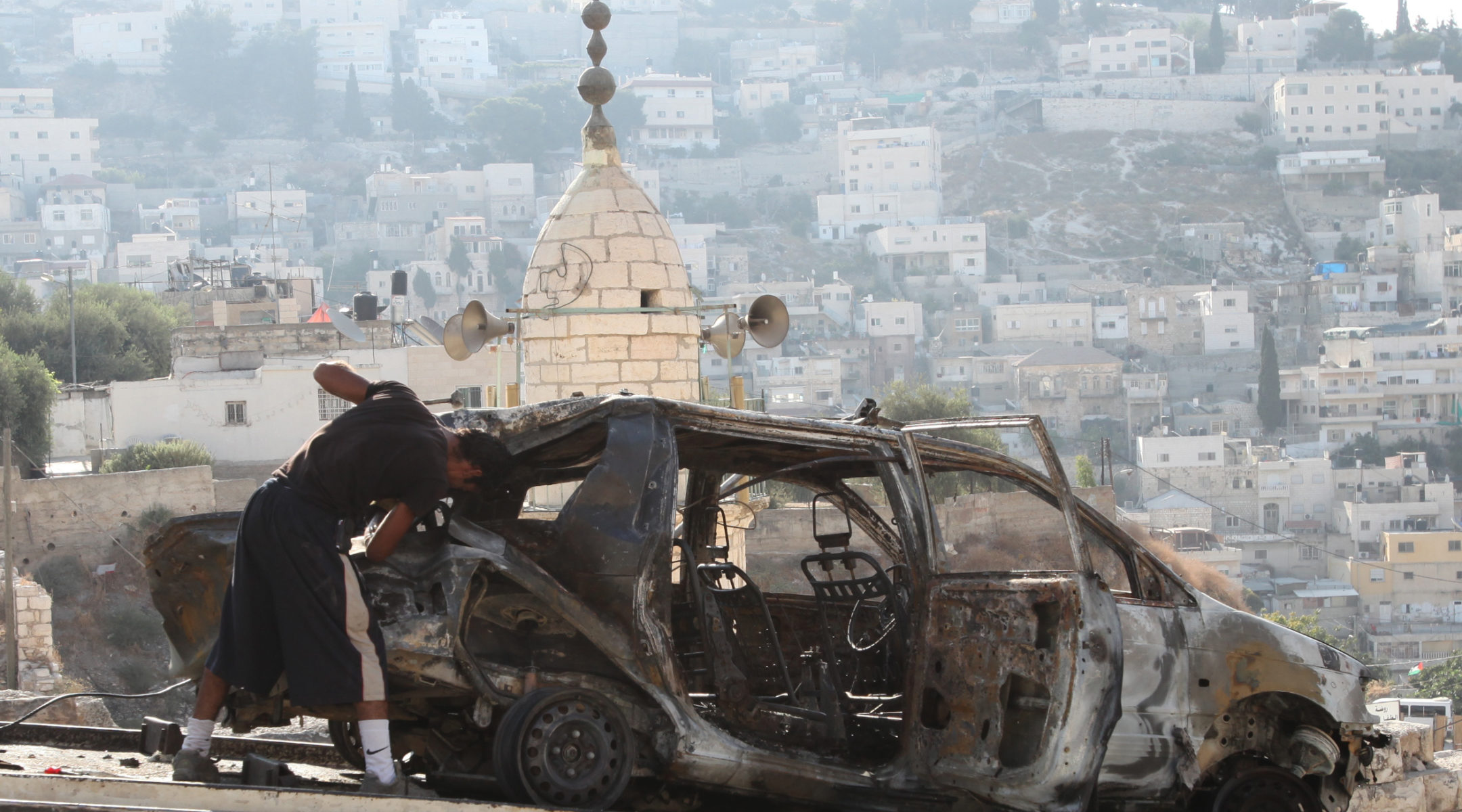 When Israeli and Palestinian leaders meet at the White House in September, they'll have to surmount simmering tensions -- such as riots Aug. 26, 2010 in eastern Jerusalem in which Palestinians set cars ablaze -- to press ahead with negotiations. (Yossi Zamir / Flash90 / JTA)
Advertisement

WASHINGTON (JTA) — The White House dinner on Sept. 1, prior to the official launch of renewed Palestinian-Israeli talks, will be key to outlining the contours of the negotiations.

Unless, that is, it turns into a food fight.

Until the dinner, the exact issues to be negotiated will remain unknown. What we do know is who will be there and where they’re coming from. Here’s a preview.

The proposed talks will mark the second time that the 60-year-old Netanyahu has engaged in negotiations with a Palestinian partner under U.S. pressure.

Last time, in 1997, while facing then-President Bill Clinton and the late Palestinian leader Yasser Arafat, Netanyahu ceded a degree of control around Hebron to the Palestinians. He has since suggested that he regrets the concession: He was recorded as telling a grieving settler family in 2001 that his agreement was little more than a ruse to keep a hostile administration at bay. Also, his revered father, Benzion Netanyahu, was known not to be happy with the concession.

Having completed a slow climb back to the premiership after his plunge in popularity following his first term, from 1996 to 1999, Netanyahu reportedly sees himself in a much stronger position vis-a-vis Palestinian Authority President Mahmoud Abbas and President Obama than he was with Arafat and Clinton.

Netanyahu wants to get security issues out of the way before he talks final-status issues like Jerusalem, borders and refugees. Making sure that he has a plan to protect Israelis will be key in the effort to pitch concessions to an Israeli public still wary of the pounding Israel took after it withdrew unilaterally from Gaza in 2005.

The immediate question for Netanyahu is whether or not he’ll extend the self-imposed, partial, 10-month settlement construction freeze that is set to expire in late September. If he doesn’t, Abbas has said he’ll quit the talks.

Negotiations are the only way for Abbas and his prime minister, Salam Fayyad, to demonstrate to the Palestinian people that diplomacy trumps violence as a means to statehood. Abbas insists that Israel agree to a permanent settlement freeze, and he wants to make sure the talks get to the final-status issues as soon as possible so he can show his constituents that he is reaping the benefits of cooperation.

It is tempting to cast the haste with which President Obama, 49, has organized these talks for early September as a sign of his panic at the prospect of November congressional elections that seem likely to result in losses for the Democratic party.

However, such an analysis would ignore the fact that Obama was pressing hard for talks months ago, when his approval ratings were much higher; it would also disregard America’s broader foreign policy strategy in the region. For the United States, having the talks now gives Netanyahu a reason to extend his settlement moratorium and thereby sustain Arab support for U.S. policies elsewhere in the Middle East. This support is seen as key while Obama attempts to juggle other crises in the region, including Iraq’s vexed attempts to set up a government and the simmering concern over Iran’s accelerating nuclear ambitions.

A peace treaty also would signal U.S. strength in the region; a Palestinian state would allow Arab governments some leeway in explaining to their populace why they are aligning with a U.S. effort to isolate the Iranian theocracy.

The U.S. posture has been to insist that these are direct talks, but Obama has not been shy about threatening direct intervention if there are stumbles.

The United States sees both these figures as critical to making the talks – and, eventually, Palestinian statehood — work.

Egypt maintains some sway over Hamas, and controls access to a major entry into Gaza. Jordan has been deeply involved in helping to train the P.A. police force, and would be a natural outlet for a resurgent Palestinian economy. Both countries are Israel’s only neighbors officially at peace with the Jewish state.

Mubarak, 82, is known to be ill and eager to transfer power smoothly to his son, Gamal Mubarak; containing the Gaza problem and playing a role in birthing a Palestinian state would provide a much-needed boost to Mubarak rule.

Abdullah, 48, is also eager to contain Islamist extremism and has in recent years positioned his regime as a bridge between the West and the Muslim world. The emergence of a Palestinian state in the West Bank would also help to quell the notion that Abdullah’s kingdom, where the majority of the population is Palestinian, should be the Palestinian state.

Clinton, 62, is set to play the role of the primary broker at the peace talks. Beginning Sept. 2, she will host the first substantive talks Israeli and Palestinian leaders will have had since 2000. That is a sign of Obama’s increasing confidence in his one-time bitter rival for the Democratic presidential nomination.

Clinton aides have leaked to the press their frustration with the perceived limits on her role, saying she has been kept out of the big games. That is changing, as evidenced not only by her newly central role in these talks, but also in her recent front-line exposure as she urged her former Senate colleagues to support new arms treaties with Russia.

Israelis have been hoping for Clinton’s return, despite her role in March in dressing down Netanyahu over Israel’s announcement, during a visit by Vice President Joe Biden, of a large housing start in eastern Jerusalem. Clinton long has been seen as having strong emotional ties to Israel  — ties that Israelis feel Obama lacks.

It probably doesn’t hurt that she spent part of her daughter Chelsea’s wedding this summer carried aloft in a chair during the dancing of the hora.