Sukkahs that captured a city’s imagination to go nationwide 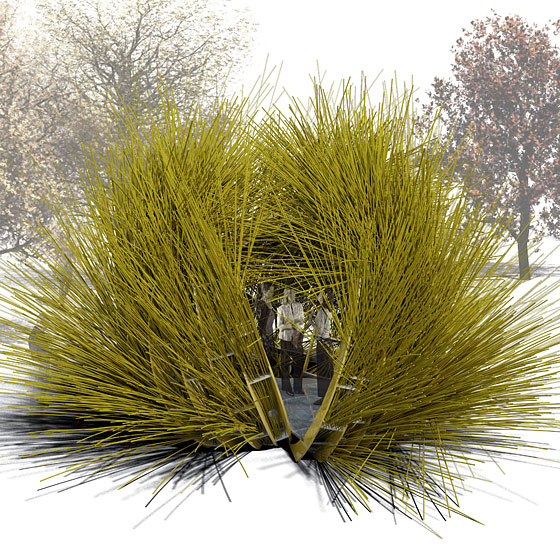 "Fractured Bubble," by Henry Grosman and Babak Bryan of Long Island City, N.Y., was the winner of the Sukkah City architectural competition in Manhattan. (courtesy of Reboot)
Advertisement

SAN FRANCISCO (JTA) — It was a surprise hit on the cultural roster of a city that may be the most culturally busy city in the nation.

And even though the Sukkah City architectural competition in New York is being dismantled this week, look for Sukkah City next year in a town near you.

“Our goal is to fan it out across the nation next year to 15 cities,” said Roger Bennett, who put together the sukkah competition with writer Josh Foer.

More than 620 participants from 43 countries submitted designs for sukkahs, the outdoor booths Jews build on the Sukkot holiday. A dozen finalists, chosen by an expert panel, were constructed for two days in Manhattan’s Union Square Park. Thousands of visitors wandered through the sukkahs; more than 17,000 voters cast ballots for their favorite.

The winning design — “Fractured Bubble” by Henry Grosman and Babak Bryan, which one reporter described as an “exploding coconut” — was left up alone for the duration of the holiday ending Friday.

Who would have thought a bunch of wild and crazy huts would generate such attention?

The project became a media darling. Reporters from The Wall Street Journal to The Los Angeles Times gushed and cooed over the cutting-edge sukkahs, all of which had to conform to halachah, or Jewish law: more than two walls; a roof made of organic material that provides more shade than sun but allows for views of the stars; no taller than 20 cubits but higher than 10 handbreadths.

“I’m not surprised at the buzz,” said Jacob Wisse, director of the Yeshiva University Museum in lower Manhattan, where two of the 12 winning structures spent the past few days on display after they were taken down in Union Square on Sept. 20. “It reflects the natural interest in a contemporary understanding of traditional forms.”

Bennett, vice president of the Andrea and Charles Bronfman Philanthropies and co-founder of Reboot, a network for Jewish innovation, said one inspiration for the competition was to rescue Sukkot, one of the Bible’s three pilgrimage festivals, from its neglect by non-observant American Jews.

“We wanted to take Sukkot, a 21st century festival of meaning, and place it back on the pedestal where it belongs,” Bennett told JTA. “Themes of homelessness, of scarcity and abundance, of hospitality — there are few more important values embedded in a ritual than these.”

One of the finalist designs took the homeless theme literally. “Sukkah of the Signs,” conceived by an architectural firm in Oakland, Calif., utilized nearly 300 signs bought from homeless people in the San Francisco Bay area to illustrate the transient nature of the shelter provided by a sukkah.

In keeping with the theme, the wildly fanciful and elaborately constructed finalists themselves had short life spans.

Following their two-day presentation in the park, two were carted off to the Yeshiva University Museum, one went to the JCC in Manhattan and a couple were sold to private collectors, according to Bennett. Several ended up on the sidewalks of New York, cast off and abandoned.

New York Times writer Ariel Kaminer noticed that one runner-up sukkah, left by its creators on an Upper West Side sidewalk, was commandeered by a few local families. They “had run home and grabbed food, then reconvened under the stars,” moving with an alacrity Kaminer chalked up, at least partially, to “the lengths to which New Yorkers will go for outdoor seating.”

Sukkah City is inspiring other ventures.

The Skirball Cultural Center in Los Angeles already had commissioned a local firm to design its public sukkah; education director Sheri Bernstein said it “wasn’t inspired per se” by the New York contest.

“But we were inspired by the goals of the project, which tapped into something of interest not only to the Jewish community but the larger community: issues of shelter and caring for the earth and the world around us,” she said. “When we heard about Sukkah City, it confirmed that this is of interest to people. It’s a point where Jewish values can connect with issues of wider concern.”