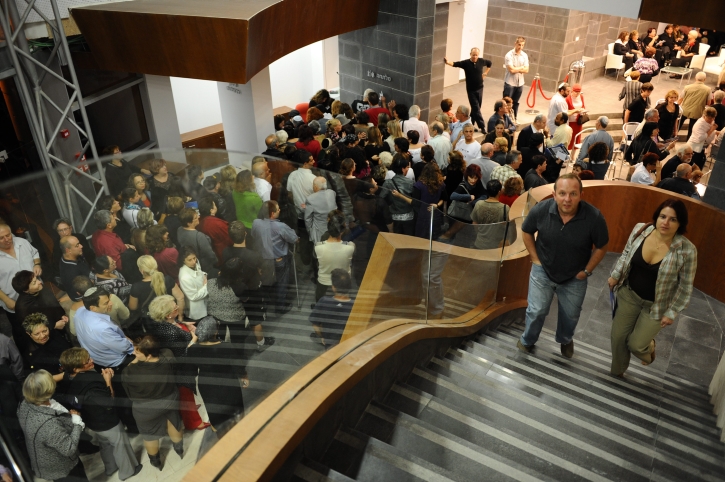 JERUSALEM (JTA) — Residents of the arid West Bank town of Ariel got a taste last week of Paris.

Defying left-wing calls for an actors’ boycott, the Beersheba theater group inaugurated a new cultural center with a moving performance of “Piaf,” a musical tribute to the undisputed doyenne of the French chanson.

The very staging of the show went to the heart of a bitter argument between left and right over which side can claim to be today’s true Zionists. Each accuses the other of betraying the Zionist heritage and giving succor to a rising tide of delegitimization that calls for Israel’s dismantlement or at least questions its right to exist.

For the left-wingers, the tricky dilemma is how to criticize the government and the occupation without providing ammunition for Israel’s foes.

Right-wingers argue that sharp left-wing attacks on the settler project, like calling for a cultural boycott of the settlements, play into the hands of would-be delegitimizers, who also use the boycott weapon. Left-wingers retort that only by ending the occupation, the target of virtually all their criticism, will Israel finally be able to put to rest the growing rumblings against its international legitimacy.

In the run-up to the Piaf performance, left-wing actors, directors, authors and academics wrote letters calling for a boycott of the Ariel cultural center to make crystal clear their opposition to the ongoing settlement enterprise.

“It was essential to remind Israeli public opinion that there is no consensus on the legitimacy of the settlements,” playwright Yehoshua Sobol, one of the leaders of the  protest, told JTA. “It’s a case of Ariel or Israel. Ariel will destroy Israel if it goes on like this.”

Israeli Culture Minister Limor Livnat responded with two proposals, both of which enraged the left: that government financing for theater groups be dependent on prior agreement to perform anywhere under Israeli control, and that a prize be created for “Zionist” work.

Outraged left-wingers argued that it would be wrong to attach government strings of any kind to creative work. Moreover, they asked, who would define what was or was not “Zionist”?

“There is a semantic confusion here,” Gadi Baltiansky, director of the Geneva Initiative, a 2003 blueprint for peace with the Palestinians, said in an interview with JTA. “When Culture Minister Limor Livnat says her answer to those who don’t want to perform in Ariel is to give a prize to a ‘Zionist’ work, she is turning things upside down. The true Zionists are the people who don’t want to keep the West Bank, and those who do are the ones undermining the legitimacy of the Zionist enterprise.”

The right-wingers contend that Israel, surrounded by irredentist enemies and facing growing international criticism aimed at delegitimizing its very existence, desperately needs a single unifying ideology based on the justice of its cause. Otherwise, they say, the country might not survive.

“If we are to withstand everything the Israeli Arabs, the Islamic world and the post-modernists who see nationalism as outmoded and immoral want to do to us, we need a defining ideology that highlights the justice of our cause,” Yisrael Harel, chairman of the Institute for Zionist Strategies, told JTA. “Otherwise, over time, there won’t be a Jewish state because there will be no one left to fight for it.”

Left-wingers respond that it is precisely the monolithic ultranationalism pushed by people like Harel that could make Israel an international pariah. On the contrary, they say, a place of honor for Israel among the nations depends on a commitment to universal, humanistic ideals and an end to the occupation.

For the past few years, Eran Shayshon of the Tel Aviv-based Reut Institute has been working on strategies to combat Israel’s would-be delegitimizers. In an interview with JTA, Shayshon argued that vocal Israeli left-wing critics can actually play a key role in the fight against delegitimization. Coming from them, he said, criticism of the delegitimizers carries more weight.

But Shayshon says that not all left-wingers take a helpful stance. Some are wary of even acknowledging that a delegitimization problem exists, he says, because they fear that to do so might compromise their freedom to criticize the government. Others go too far, using terms like “apartheid,” which plays into the hands of delegitimizers.

“We need people from the liberal left first to acknowledge that a delegitimization problem exists and then to distance themselves clearly from the phenomenon,” Shayshon said.

Shayshon maintains that while the ultranationalism on the Israeli right is clearly a response to delegitimization, it is not a very effective way of fighting it. In some cases, he says, it even helps the delegitimizers depict Israel as an intolerant and close-minded society.

In Shayshon’s view, what Israel needs is to make a very clear distinction between delegitimization of the state and legitimate criticism of government policy, and then to be receptive to the criticism while isolating and marginalizing the delegitimitizers.

The trouble is that this requires a subtlety of mind — Shayshon says that doesn’t readily exist in Israel.

“Israelis tend to adopt a ‘narrow tent’ mind-set, which says, ‘If you are not with me, you are against me,’ whereas the delegitimizers do the opposite, embracing anyone who is not against them,” he said. “That is a much more effective strategy and I think we should adopt it. The narrow-tent approach could push critics who care about the country into the arms of the delegitimizers who don’t.”

Nevertheless Shayshon — who has been focusing on areas like London, the San Francisco Bay Area, Madrid and Montreal, where delegimization groups are strong — predicted the beginnings of a positive turnaround.

“2011 is going to be the first year we fight back. When I say we, I mean the government as well as pro-Zionist groups in Israel and abroad,” he said. “There is a much greater awareness of the potential power of delegitimization, and we are finally gearing up to meet it.”

Left-wingers insist that it is relatively easy for them to be against the occupation but for the Israeli state and against the delegitimizers who would destroy it.

“I, for example, came out against the boycott calls and wrote a letter to the University of California at Berkeley when it was necessary,” Baltiansky said. “I also came out against those who are in favor of a Palestinian state but forget there is another state here, too.”

Baltiansky does not think the delegitimizers pose an immediate threat to Israel’s existence, but he is worried about longer-term trends.

“It could start with an isolated academic boycott, which turns into a much larger economic boycott, followed by refusal to meet Israeli officials,” he said. “People could start asking, why is Israel necessary? And that could lead to really damaging isolation. That’s why we are so strongly against BDS” — the term used to describe the campaign for anti-Israel boycotts, divestment measures and sanctions.

In Baltiansky’s view, a credible peace process would help arrest the negative trend, and achieving a two-state solution as envisaged by the left would finally remove questions about Israel’s legitimacy and marginalize the remaining hard-core delegitimizers.

“The two-state solution gives legitimacy to Israel, to Zionism and to the right of the Jewish people to self-determination,” Baltiansky maintained. “And the lack of such a solution puts our legitimacy at risk.”